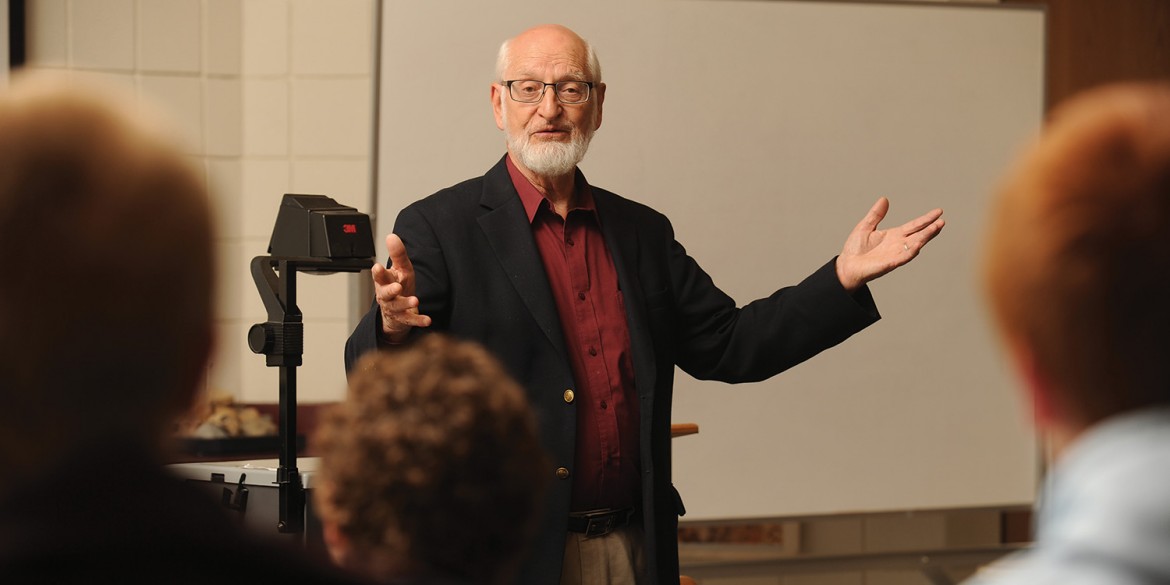 Marion Bontrager ’57 is more drawn to cities than rural areas, and he enjoys a variety of experiences and interactions. Though Hesston, Kan., is not an urban setting, Hesston College offered the right balance of variety and continuity for a 40-year career that marked its end in May.

Bontrager’s influence on the way Hesston College students study the Bible and view their faith has influenced thousands of lives.

“I have always said that to teach you need to love people, ideas and enjoy seeing people grow,” said Bontrager. “I have had the privilege to work with young people at the stage where they are doing a great deal of growing and thinking. Seeing the results of that has been very rewarding.”

After earning an A.A. at Hesston, Bontrager finished a bachelor of arts from Goshen (Ind.) College and a master of divinity from Goshen Biblical Seminary. He was teaching Bible and social studies at Central Christian School (Kidron, Ohio) in 1972 when he was invited to return to Hesston College as a faculty member. After giving Central Christian one more year, he moved back west to start a new journey.

With his arrival on campus, Bontrager comprised the one-person Bible department for the first few years, serving in a campus pastor capacity. Bible-specific curriculum was offered through the Foundation Studies courses, and in his second year, Bontrager began increasing the number of Bible classes offered by adding Peacemaking and Justice to the curriculum. Peacemaking and Justice became his favorite class to teach.

That same year, he began Campus Worship as way for students to worship together. He later began youth ministry courses, and in 1986 he taught the first Biblical Literature course, which he conceptualized and formed as a way to ensure students would receive biblical teaching from an Anabaptist perspective.

As a piece of the college’s core curriculum and a requirement for graduation, Bib Lit has influenced more than 5,000 students who have taken with them an expanded worldview, a new way of reading the Bible and a broader understanding of their own faith.

Although many courses have long been a part of Bontrager’s responsibilities, he’s never taught a class the same way twice as he adapted to changing times and students, and has allowed for the variety he desires in life.

One thing that did not change in 40 years, however, is his passion for students and teaching biblical truths.

“Marion never seemed too far above us – he was always down-to-earth and personal,” said Nick Ladd ’14 (Waldron, Mich.). “He connects with people. He loves the Bible and he loves teaching, and it was evident every day.”

“Marion is a wonderful shoulder-tapper,” said Michele (Schrock) ’81 Hershberger, Bontrager’s colleague in the Bible and Ministry program and former student. “He can see past the hard shell that students sometimes put up to protect themselves to see and name gifts that others don’t see. He saw it in me as a student, and it changed my life.”

Though he has said goodbye to the college classroom and the students whom he loves, Bontrager’s teaching career is far from over. He says retirement will allow him opporutnities to continue building the church through writing and speaking across the church as well as serving South Central Mennonite Conference.

“I am grateful for the opportunity to have taught at Hesston,” Bontrager said. “I have seen students blossom, find their voice and learn beyond what they thought they could do.”