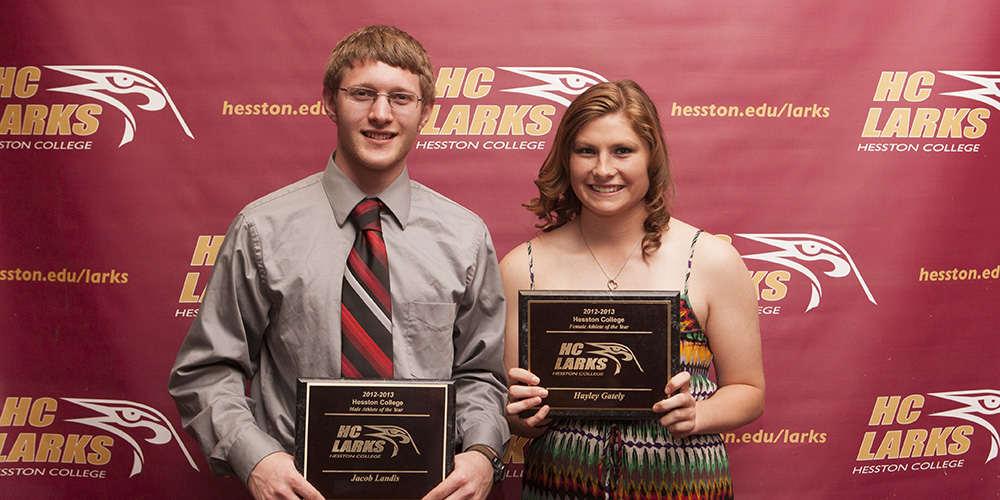 Hayley Gately ’13, Roseville, Calif., co-captain of the softball team, was named as an all-region infielder for the 2012-13 season. She is the Larks’ all-time leader in home runs, doubles, triples, runs and runs batted in. Off the field she served the Hesston campus as a student ambassador and resident assistant. Hayley will continue her academic and softball career at MidAmerica Nazarene University (Olathe, Kan.). She is the daughter of Stacy Gately.

“Hayley made countless contributions to our program and the broader Hesston campus,” said softball coach Andrew Sharp ’99. “She demonstrated tremendous leadership through her words, and more importantly, her actions. We will miss her, but are excited for her very bright future.”

Jacob Landis ’13, Sterling, Ill., is a member of the men’s cross country team, a two-time competitor in the NJCAA national cross country meet and an all-region runner. He also helped the men’s cross country team to the second highest GPA in the nation during the 2012-13 year. Jacob served the campus as a resident assistant, ministry assistant, chemistry lab assistant and a student ambassador. He was also one of two recipients of the newly established Lark of the Year Award at Larkfest 2013 for demonstrating excellence in academics, leadership and service. Jacob will attend Eastern Mennonite University (Harrisonburg, Va.) where he will run cross country for the Royals. He is the son of Keith ’83 and Lois (Kaufman) ’83, ’88 Landis.

“Jacob is a gifted, well-rounded person,” said cross country coach Gerry Sieber ’64. “He’s had a meaningful engagement with so many aspects of the Hesston College community, and I expect he will make significant contributions to the church and the world.”

The Student Athletes of the Year award was created during the 2011-12 year by a desire from the Athletics Department to acknowledge the outstanding men and women who represent Hesston College through athletics. The award recognizes the accomplishments, excellence and leadership of one male and one female student athlete on the field, in the classroom, in the dorms and campus community. Hesston coaches nominate one player from each of their teams for the award, and votes from athletic department staff members determine the winners.