The National Junior College Athletic Association recognized 14 student athletes as NJCAA Academic All-Americans for their academic achievement during their two-years at Hesston. 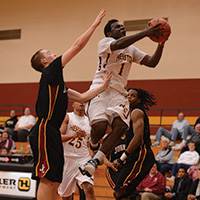 “I’m extremely proud of Mahlon’s growth as a player and person during his time here,” said coach Dustin Galyon ’04. “He is poised on and off the floor to be an impact player at the Division I level.”

The cross country teams were recognized by the NJCAA Cross Country Coaches Association for outstanding academic achievement during the 2012 season. The women’s team claimed the top academic spot in the U.S. with a 3.915 team GPA. The men’s team fell just short of the number one ranking with a 3.833 GPA.

“When you consider all of the intangible elements of this achievement, it is rather remarkable,” said coach Gerry Sieber ’64. “Our student athletes have a lot on their plates besides their sport and classes. This academic accomplishment is a testament to the culture of the college and to the kind of people who make Hesston College a special place.”

Under the leadership of second-year coach Rob Ramseyer, the Larks baseball team claimed the NJCAA Region VI crown and a trip to the Plains District Championship where they fell one game short of a trip to the NJCAA World Series.

The men’s basketball team advanced to the second round of the NJCAA Region VI tournament. The team finished the season at 21-11, surpassing 20 wins in a season for the first time under fifth-year coach Dustin Galyon ’04.

The women’s basketball team landed in the second round of the NJCAA Region VI tournament for the first time in seven years and the first time under fifth-year coach Dan Harrison ’79.