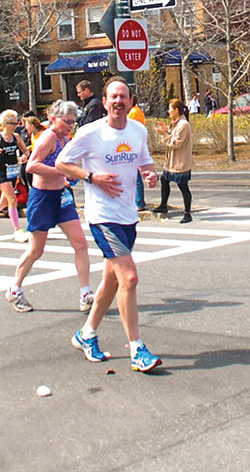 The 2013 Boston Marathon was Lynn Fielitz’s ’79, Walden, N.Y., second time running the marathon, and he expected it to be much like the first. Tragically, it would be much different than any of the 14 marathons he has run. Looking back, he notes that even one tiny difference in his day’s events could have meant a world of difference.

Lynn crossed the finish line on April 15 about three minutes before the bombs exploded. Drained of energy after 26.2 miles, he hadn’t yet made it to the water table. And he can’t help but think how a series of events kept him safe.

At mile 23, Lynn stopped for about 20 seconds for greetings and photos with a former colleague before he was on his way for the remaining three miles.

As he turned onto the now infamous Boylston Street for the last half mile, Lynn remembers looking at the people sitting outside cafes watching runners and the crowds packed along the barricades.

“I was running along the left side of the street – the side the bombs went off – high fiving kids and enjoying the last bit of the race,” he said. “Later I kept thinking about how many of those people may have been injured just minutes later. One more water break or walk break, if I had gotten on the bus sooner, if we hadn’t broke down or I was in a different wave of runners – any little decision could have made three minutes of difference. I am thankful that God was watching out for me.”

Lynn Fielitz ran sprints and did the high jump on the track team at Hesston. He also began his volleyball career at Hesston as a member of a student-formed club team. Lynn is associate professor/associate director of instruction in the Department of Physical Education and the former head women’s volleyball coach at the United States Military Academy, West Point (N.Y.). He credits Hesston College and coach Gerry Sieber ’64 for his love of road races.“Hesston was a great place for me to start,” he said.