Fundraising for dorm renovation a success 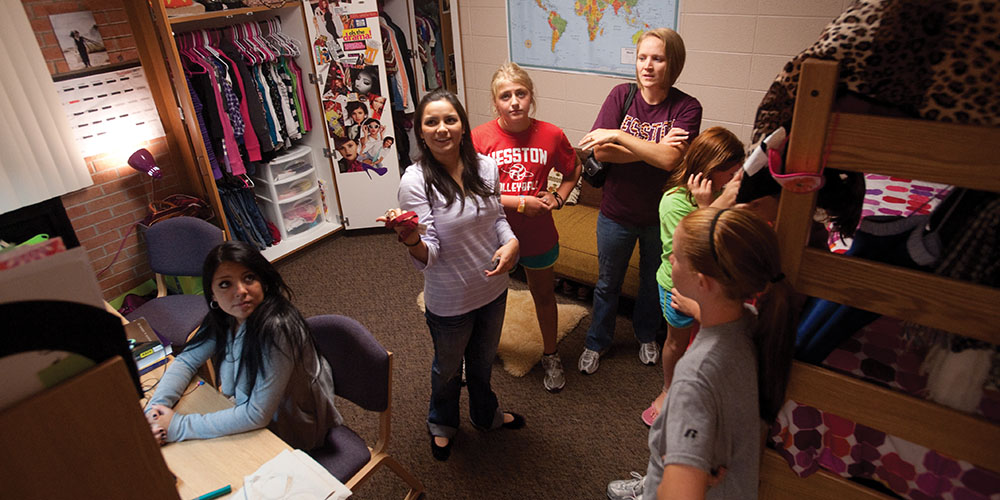 Hesston College Vice President of Advancement Yvonne Sieber announced that the college reached its nearly $3 million goal for renovations to the central and west wings of Erb Hall dormitory. The college will complete the renovations by adding an elevator and lounges connecting the separate wings of the building.

Work on lounges is slated to begin once students move out following graduation in early May and will be completed by the time students return to campus in mid-August. The elevator is expected to be completed in 2012.

Enough funds were raised by May 2011 to renovate the dorm rooms and mod lounges, which were completed in August 2011. The elevator and connector lounges were put on hold until additional funds were raised. The college views the addition of the elevator as an important part of the project as it will make all four floors of the building accessible to all students.

“The elevator will meet a number of needs,” said Lamar Roth, vice president of Student Life. “It will make moving larger objects easier when students move in and out, and it will expand accessibility for students who may be physically challenged – whether it is something they live with every day or temporarily for those recovering from injuries. Having an elevator will broaden the residential experience and open doors for social interaction.”

Renovations in the central and west wings of Erb Hall have been ongoing over the last several years as the building, which was constructed in 1969, was beginning to show its age. A new roof and windows were installed in 2007. Bathrooms were renovated during summer 2010 followed by the dorm rooms and lounges in summer 2011. Renovations to the interior of the building included new paint, carpet and furniture, as well as replacing all mechanical infrastructure, rusted pipes and new heating and cooling units.

“These renovations reflect how we want to present ourselves and the experience we provide,” said Roth. “It’s important for our students to know they don’t have to worry about deteriorating pipes and that they have comfortable spaces in which to live.”

About 75 percent of the college’s nearly 470 students live on campus. The student population represents 27 states and 14 countries, so for many students, Hesston College becomes a home away from home for about nine months every year.

“We want our dorm spaces to be comfortable, pleasant and meet the needs of our students,” said Roth. “Inviting spaces have a tremendous impact on student interaction.”

Individual donors and businesses from around the country gave generously to update the dorms, improving the student experience.

“During these difficult economic years, we appreciate the help we received from the local community, alumni and friends of the college to give our students updated living spaces,” said Yvonne Sieber, vice president of Advancement. “We are glad we were able to renovate our existing dorms to maximize space and efficiency instead of constructing brand new buildings.”