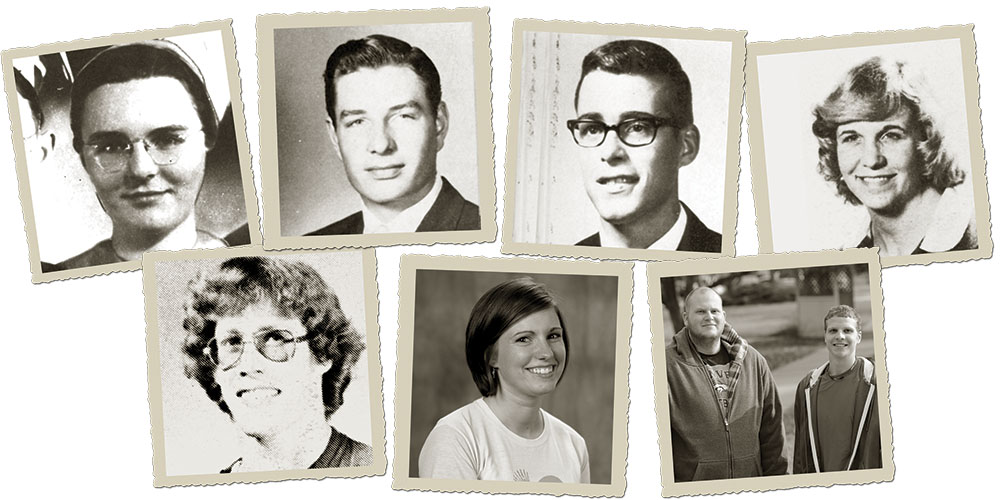 Attending Hesston College has been a family tradition for six generations

When David B. and Anna (Musser) Weaver moved their family of nine children from Lancaster, Pa., to Harvey County, Kansas, in 1880, there was little on the expansive prairie except for a few wheat fields and a handful of homesteads and farms. Although the town of Hesston wouldn’t be founded until six years later, and Hesston Academy and Bible School wouldn’t come along for 23 years after that – six years after Anna’s death and four years after David’s – the Weavers’ move to the prairie was, essentially, the beginning of a Hesston College legacy.

An impressive 134 people (*see Editor’s note below) spanning six generations of Weaver descendants have been identified as alumni of Hesston Academy and Hesston College, earning them the unofficial Hesston College title of “Family with the Greatest Number of Alumni.” Even more can claim to have been associated with the college – whether they had a hand in organizing the founding, built college-owned buildings, served on the faculty or attended for a semester or two.

From their first days in Harvey County, the Weaver family was involved with the church and community around them. David B. was the first minister at the Pennsylvania Mennonite Church, which became Whitestone Mennonite Church. He was highly respected in the area, and upon his death, a front-page obituary ran in The Newton Kansan newspaper with the headline, “A noble character, his.”

David and Anna’s children were adults with families and beyond the age of schooling by the time talk of a college started, yet several of them were involved in the early years of the school. Moses was appointed to the executive committee which established the school and served on the leadership board until his death. Menno built the house that would later be known as “The Elms” and serve as a dormitory for several years.

David and Anna’s grandchildren would be the first generation to actually attend the school and at least 22 of them did.

Wilmetta (Weaver) Ac40, ’42 Dietzel (Hesston, Kan.), David and Anna’s great-granddaughter, acts as a kind of historian for the family. She remembers hearing a story about her great-uncle Reuben who had 14 children, 13 of whom attended Hesston. When asked if he supported the cause of the school he responded, “Of course I’m a sponsor of Hesston, I have 13 reasons to be one!” As his family continued to grow, he would end up with 52 additional reasons.

“When you come from the Weaver family, you usually end up at college with cousins, which was a highlight for me,” said Marlene (Beck) ’76 Yoder (Battle Creek, Mich.), Reuben’s granddaughter.

For the first generations of Weaver students, the Academy and College’s location in south central Kansas made it convenient for the families who lived in the area to send their children.

“The family always supported the academy and college as it was an extension of the church and the only high school in town until the mid-60s,” said Wilmetta.

“Growing up near Hesston, worshipping on campus each Sunday and attending basketball games, Hesston College was always there,” said Duane Beck Ac63, ’65 (Raleigh, N.C.), Reuben’s grandson. “Many years later I recognize its many intangibles – the power of friendships, opportunities for leadership and the academic challenge provided good soil in which to take root.”

Hesston paved the way for graduates to go everywhere and leave their mark on the world. Some did overseas missions while others settled permanently overseas, adding an international flavor to the Weaver family.

Wandalee (Weaver) Ac47, ’49 Kabira, Moses’ granddaughter, met her husband Chosei, a native of Japan, while a graduate student at Michigan State University (East Lansing). The couple married in Okinawa, eventually moved to Tokyo and sent two of their three sons – Ken G ’81 and Jay ’84 – to Hesston to connect with their Weaver family roots.

“As a child, before entering Hesston Academy at age 14, I was mesmerized by the college’s music programs, the lecture series, the basketball games where both of my brothers played on the teams and by the teachers – Mary Miller’s smile, Milo Kauffman’s round form with his rumpled suit and inspiring talks,” recalled Wandalee. “At Hesston, I learned to use my mind and explore all the knowledge and ideas the teachers brought to us. With two of our children attending Hesston as well, we value the education and experiences gained there.”

Generations of students also found Hesston to be the place for their vocational starts and a love for the church.

“It was through the competent and caring faculty and the strong sense of community on campus that my mind and faith was stretched and grew,” recalled Terry Shue ’77 (Dalton, Ohio), another of Reuben’s grandsons. “It was no longer enough to give Jesus my heart. Through my years at Hesston, I came to understand it was my life which God was asking of me.”

Over the last 94 years, class records indicate a Weaver descendant at Hesston every year except one and a graduate in 78 of those years. The family can easily share ways the college has changed since its early days.

Having grown up and lived in Hesston all of her life, Wilmetta remembers observing academy and college students over the years, hearing about shenanigans on campus, seeing rules and policies change and being a part of those changes as a student herself.

“The former Mennonite Board of Education set the standards by which the college operated for so many years,” said Wilmetta. “There were a lot of rules to follow, so it was a big deal when a photo of a female student wearing pants showed up in the 1940 Lark yearbook and the student commencement speaker gave his speech with his shirt tail hanging out.”

Duane and Marlene’s mother Anna Ruth (Weaver) Ac45 Beck (deceased) told her children about the 10:15 p.m. lights out rule when she was a student.

The earliest Weaver relatives probably wouldn’t recognize campus today, as it has expanded and developed over the years. Although buildings, rules and faces change, the Hesston College spirit and values remain.

“During my time at Hesston, I not only made lasting friendships, but entered into a network of people from all over the country,” said Kelsey Shue ’08 (Goshen, Ind.), a third generation alumna.

“Long after the content of texts and lectures faded into oblivion, I am profoundly grateful for my experience as a student,” said Moses’ grandson Jerry Weaver Ac59, ’61 (Hesston, Kan.). “There were individuals on the faculty, staff and administration whose lives, character and faith made a significant impression on me. I built relationships then that remain extremely important in my life 50 years later.”

Matt Weaver ’13 (Hesston, Kan.) and Sam Ruth ’14 (Wichita, Kan.), both fourth generation students and great-great-grandsons of Moses, represent the Weaver family on campus now and continue to pave the way for the family name to continue as a Hesston College presence to the next generation.

“I am proud to continue my family’s legacy at Hesston,” said Sam. “Knowing about that history inspires me to stay on track and build a successful life like they did.”

Editor’s note: A special thanks goes to Wilmetta (Weaver) Dietzel, Bob ’70 and Phyllis (Miller) ’70 Weaver and Marcia (Weaver) ’73 Mendez for their help and knowledge in exploring the Weaver family.

*Since this article was published, four more people have been identified as Weaver descendants, including sophomore Tyler Yoder  ’12 of Bay Port Mich. The newest additions bring the total number of Weaver alumni to 138.

A list of Hesston College alumni from the David B. and Anna (Musser) Weaver line