Wisdom from the inner circle 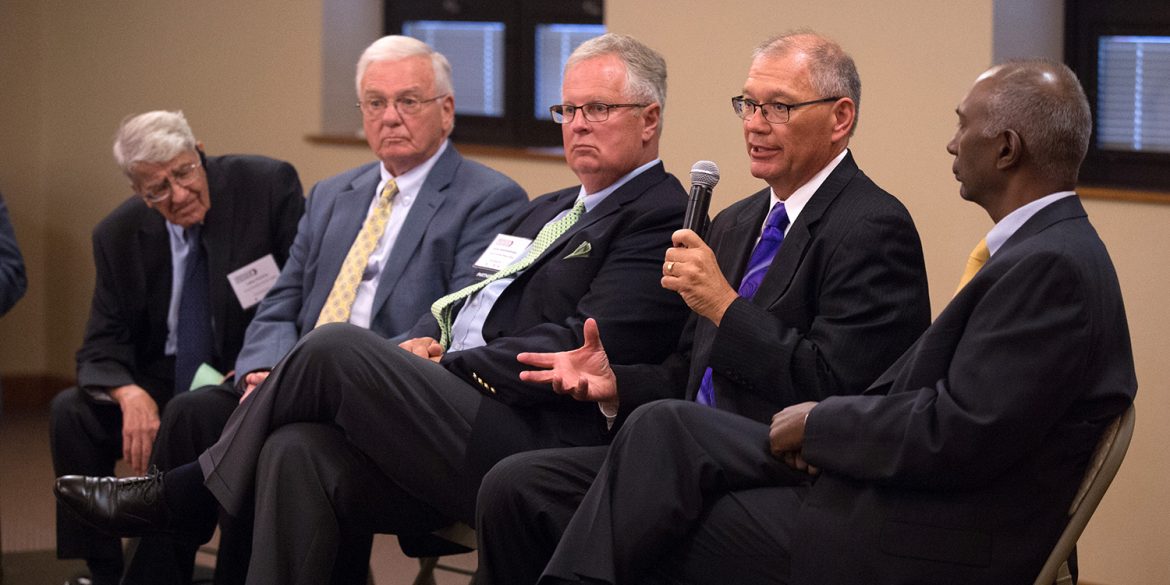 It’s a position only a few truly understand: president of Hesston College. What does it mean and how does it feel to bear the responsibilities, celebrations and frustrations of this special place? How does one balance relationships and personal life?

As Hesston’s ninth president, Dr. Joseph A. Manickam ’87, prepared for his inauguration on September 23, less than two months after assuming office, what better people to hear from and learn from than those who came before him. Hesston College’s four living past presidents gathered on campus during Homecoming and Inauguration Weekend to welcome Manickam into their small group and to share nearly fifty collective years of wisdom.

When the four “been-there-done-that” presidents get together, the conversation and laughter flow freely. Nowhere are there signs of hard feelings for any decisions or situations inherited from their predecessors as presidential transitions were made.

As the former presidents sat together as friends, each reflected on his time at the helm and remembered the events and times that shaped his presidency. Each one served within a different context of the college, but some common themes came forth – the elements that make Hesston College a truly unique place – everything from the aesthetic of the campus to the personnel.

For one thing, the presidents agreed that Hesston College faculty and staff have something extra that is not found at a lot of other colleges and universities. Perhaps it is the relational community that quickly becomes part of them, but each one shows commitment to the success and overall growth of students.

Kirk Alliman (1981-92) noted the longevity and loyalty of many employees – some of who remain even from his tenure. “It’s a commitment,” Alliman said. “The maintenance people, for example, have the same sense of ministry as we [the presidents] do.”

Laban Peachey (1968-80) remembered a trip to Chicago for an educator’s conference with chemistry professor Jim Yoder ’62 in the 1970s, early in Yoder’s teaching career. “Jim came out of that meeting smiling, and he said, ‘I thought I was a chemistry teacher and I discovered I’m an educator,’” recalled Peachey. “I always remembered that and I should have done more with it, but I think that’s what a lot of Hesston faculty have discovered – they’re educators.”

As the group dreamed about the future of Hesston College and its relevance in an ever changing world, they shared much hope that the college would continue to thrive and serve students well.

“Of course there are disadvantages to being a two-year college, and there are major advantages,” said Loren Swartzendruber (1993-2003). “The whole leadership development piece is a real advantage. Another one is nimbleness, capacity to change. I think relevance is going to be tied to the ability to make changes fairly quickly, and Hesston has demonstrated in the past that it can do that.”

“Hesston has a spiritual center,” said Keim. “It’s kind of hard to define, but over and over again I’ve seen students come from a wide variety of backgrounds – even faiths that aren’t Christian – and find a spiritual center here. I think that’s a gift that Hesston has and will continue to offer.”