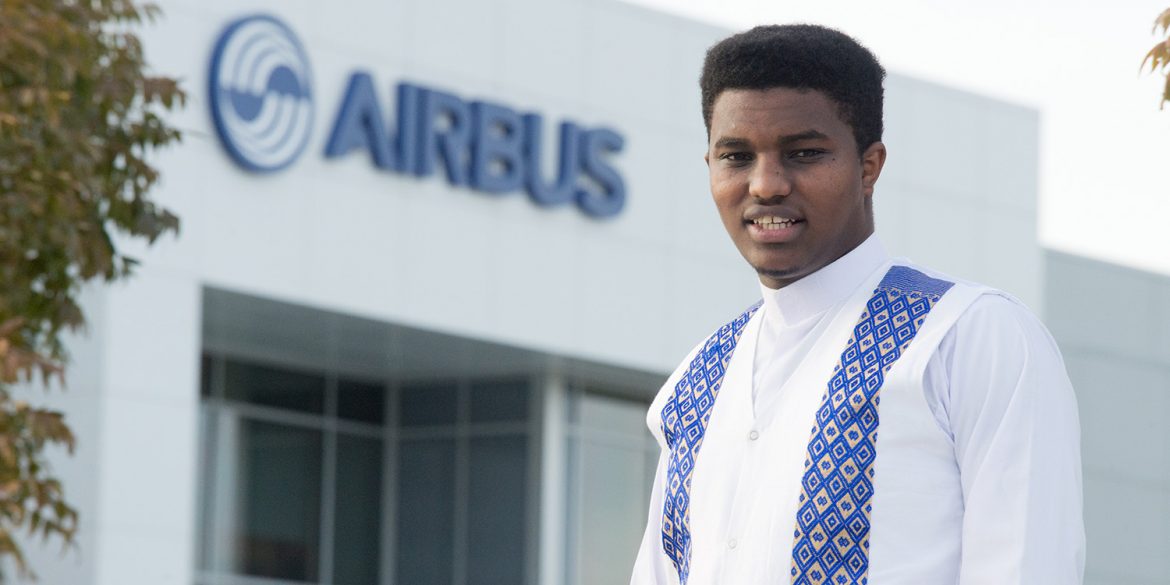 Amanuel Wondimu ’16 comes from a family of engineers, so it’s no surprise that he would dream of being one, too.

But to study in the United States? Wondimu is the first.

Bringing his interests in aerospace and mechanical engineering with him, Wondimu chose to come from Ethiopia and start at Hesston College in 2014. But that was only his beginning.

Wondimu is now a senior at Wichita State University taking 15 credits of classes, working 20 hours a week and continuing to chase his engineering dream with passion and commitment.

“It is fascinating,” Wondimu said. “Planes are beautiful. The engines, the shapes. I’ve wanted to work with planes since I was a child and now it’s reality.”

Wondimu was one team out of 18 that began the competition to design a wing display for the Airbus A320 in the new Airbus building lobby on campus. But he competed alone, as Team Ethiopia, against groups of doctoral and undergraduate students. As the winner, Wondimu received a cash prize and an internship opportunity.

But he accepts his success with humility.

Wondimu’s journey since coming to the United States has been busy. But he wouldn’t have it any other way as he gains experience at Bombardier FTC.

“It’s great exposure,” Wondimu said. “The benefit is we learn about wings, but we don’t usually see the wings. But over there, you can walk in and see actual wings. There are different challenges everyday.”

Though already having graduated from Hesston College, Wondimu still looks back on his time as a Lark as a formative experience.

“If I had come straight from Ethiopia to Wichita State University, I would have missed a lot of things,” Wondimu said. “But because I went to Hesston, I learned a lot of things. It was very fruitful.”

Wondimu remembers his physics and math classes at Hesston College, but he also remembers the courses outside of his major, such as college writing, that also continued to challenge him.

“Since day one, they asked me ‘Where do you see yourself in the next two years or four years?’”

And two years later, Wondimu walks around the campus of Wichita State University proudly showing off his workspaces and sharing stories of his engineering adventures.

Right now, Wondimu studies engineering because it interests him. The business aspect doesn’t matter as much, Wondimu said. He just wants to find something he likes to do and, he is doing just that.