A story for all 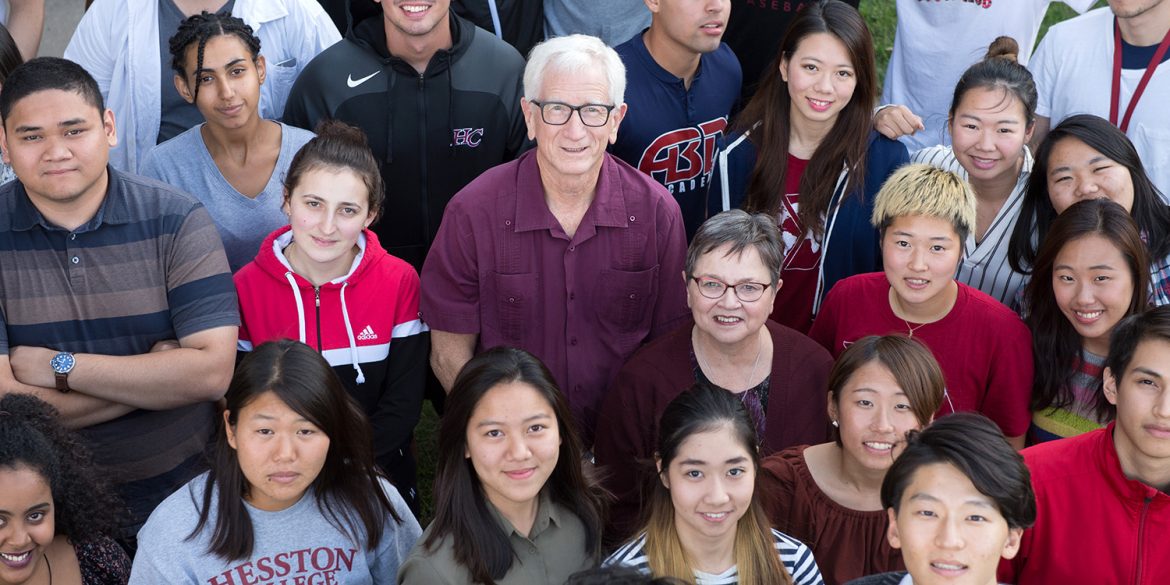 In classrooms, dorm rooms, the dining hall and athletic and performing arts venues across campus, students from around the world interact with and learn from one another. For much of the college’s 108-year existence, international students have had a home at Hesston College and an important impact on the community.

While Canadians and children of missionaries serving in foreign countries attended Hesston from its earliest days, according to John Sharp ’73 in A School on the Prairie: A Centennial History of Hesston College 1909-2009: “The first international students to attend Hesston who were not from North America were Christine Diebold from France and Eeke van der Schaaf from Amsterdam, The Netherlands, both who started in the fall of 1946.”

From that moment, a global component became part of the Hesston Experience. It’s a plot point Hesston College’s founders likely did not anticipate when they set forth the Hesston College story in 1909, yet the presence of international students has made the college’s story so much richer.

Chapter 2: A man and a program

Hesston’s International Student Program in its current state can largely be attributed to one person – Dave Osborne Ac64, ’66, who started working with the college’s international students in 1975. During his tenure, which ended with his retirement at the end of September 2017, he worked with about 1,200 of the more than 1,400 international students who have started at Hesston.

Osborne “nearly did it all,” said Rachel Swartzendruber ’00 Miller, vice president of Admissions and Financial Aid, during a program in his honor at Homecoming Weekend 2017. “He not only recruited, but he taught English classes, was one of the only academic advisors of international students, and assisted with the management of international summer housing – and for many this meant his basement and guest rooms. He was the Wal-Mart driver, the adopted parent, the banker, and in some ways, international students’ own personal immigration expert.”

Osborne’s curiosity for a global perspective began to flourish while he was a student at Hesston College. In 2012, Osborne wrote, “As a student at Hesston during the Vietnam War, I became convinced of the need to make a positive contribution through service abroad, which started 10 years of volunteer work with Mennonite Central Committee in the Middle East and shorter periods of living in Japan and India.”

His own experiences abroad resulted in his return to Hesston where he could be immersed in other cultures, serving others around the globe and making a positive impact on lives. His success, noted Swartzendruber Miller, is because of his hospitality, his commitment to the college’s mission, and his love of sharing stories.

While being deservingly lauded for the program’s success, Osborne is quick to share the praise. “It’s not my program, it’s our program,” he said. “To illustrate, the number of students we recruit for a new year is a number people always ask about. But in my opinion, a more important number is the number that come back for their second year. That percentage this year [fall 2017] was 96 percent. That’s a reflection of what happens on this campus. It’s a campus-wide involvement. It’s a campus-wide commitment.”

As Osborne moves on to his next chapter, he leaves his important work in capable hands and with an administration who clearly understands the importance of international work.

“I’m really thankful I have had a career that has given me a way to live out what is at the core of my beliefs – at the core of my faith – to be an ambassador of God’s reconciliation to all humanity,” said Osborne. “I am grateful that with God’s providence, and with [President] Joe’s leadership, and with the international Admissions new leadership team of John Murray ’81 and Mari Sailors, and with the continued campus-wide involvement, Hesston College will move forward in new ways with the international ingredient of this school.”