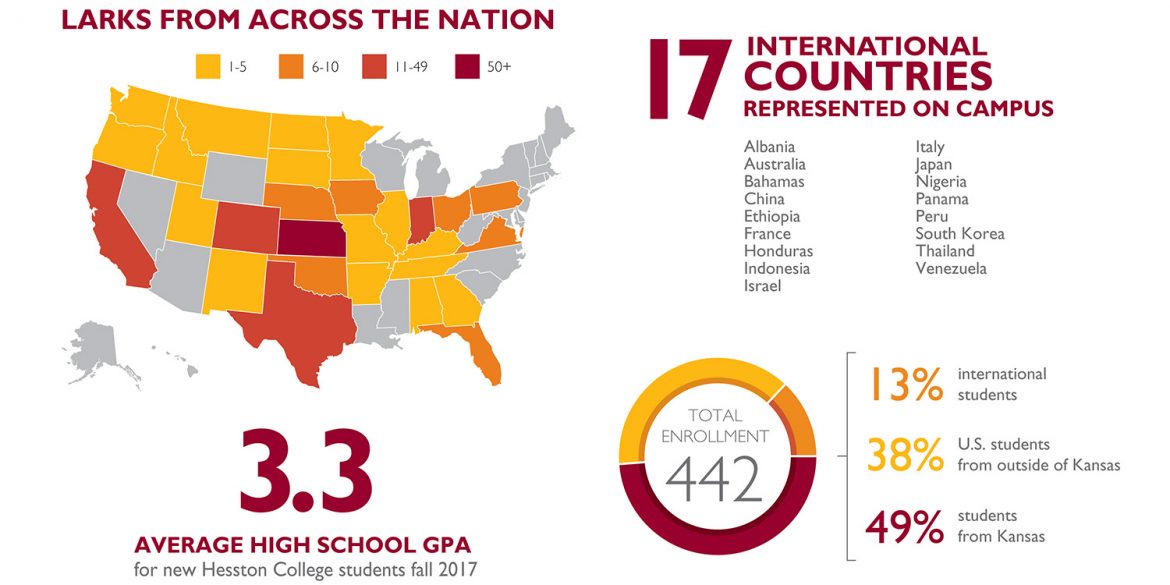 New academic and athletic programs added to Hesston College’s offerings over the last several years have culminated with an enrollment boost for fall 2017 according to the college’s official reporting numbers. Total student headcount reached 442 in 2017, a 10 percent increase from a headcount of 401 a year prior, and the highest reported enrollment for the college since 2013.

“We’re excited to see some of our recruitment and enrollment efforts paying off,” said Rachel Swartzendruber ’00 Miller, vice president of academics and financial aid. “By making an effort to learn about what today’s students are looking for in terms of programs, as well as what employers want and exploring how those programs fit into Hesston’s culture and environment, we’ve been able to make positive changes to our curriculum and extracurricular offerings that have resulted in significant growth.”

Over the last three years, the college has added or expanded offerings in at least 13 academic and athletic programs. Some of the changes include shifting from a two-year to a four-year baccalaureate nursing program and adding an RN to BSN component, adding new programs including golf, emergency management, sports management and criminal and restorative justice, and expanding curriculum in aviation, engineering, theatre, biology and graphic design.

Of total enrollment, 207 students are new and 403 students – 91 percent – are enrolled at a full-time status. The college continues to build on its global community as 56 students – 13 percent as compared to 10 percent a year ago – are international students representing 17 countries. Domestic students represent 29 states in 2017, including 49 percent from Kansas and 38 percent from out of state. Students of color are 34 percent of the population.

Following trends for the college over the last several years, retention of students from fall 2016 to fall 2017 remains high at 77 percent for the new year