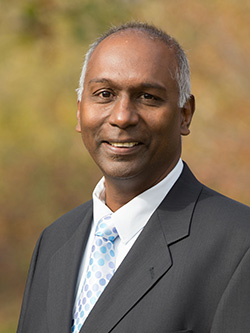 It was a hot, dry summer in Hesston, Kansas, the first time I set foot on campus in 1985. The brown lawns had cracks large enough to swallow a baseball it seemed. Students and parents alike gathered in the few air conditioned spaces available at the time, and most students seemed to already know each other as they played what I would later come to know as “the Mennonite game.”

As one of the few international students, everything was new to me. New food, new friends, new location, new professors and a new church. I was not then aware of the personal transformation that was about to take place. The term “Mennonite” was new for me as well – a term I would later come to embrace and identify with.

Fast forward 32 years and I feel like I have again set foot on campus for the first time. However, this time the newness is different. I am now a Mennonite – I am one of “them.” Even though the summer was hot and dry, the grounds are plush and green. Some of the same buildings remain, but all buildings are now air conditioned. There even remains a handful of staff and faculty who welcomed me back and are now joined by so many new and wonderful stories. As for the Mennonite game, I suppose it is still being played but by the minority. And for the first time in the college’s 108-year history, a former international student, a former outsider, a former foreigner is now the president of the college.

As I sit in my office, I remain in awe of how this campus community has evolved. In the dorms, fewer than one out of six students now comes from a foreign country. The developing and nurturing of the whole student has now been honed into what is known as the Hesston Experience. And the college now offers a four-year bachelor’s degree in nursing with a couple more in the pipeline.

So where do we go from here? I believe this journey starts with keeping the centrality of Jesus as our focal point as we always have. On this foundation, we must begin asking ourselves, “What does the world need from Hesston College?” This question, I believe, can direct us toward a Christian educational experience which is relevant for our world today and the world of tomorrow.

It is my honor to now sit in the president’s seat. And it is my hope and prayer that Hesston College will remain a relevant instrument of God’s mission in the world.