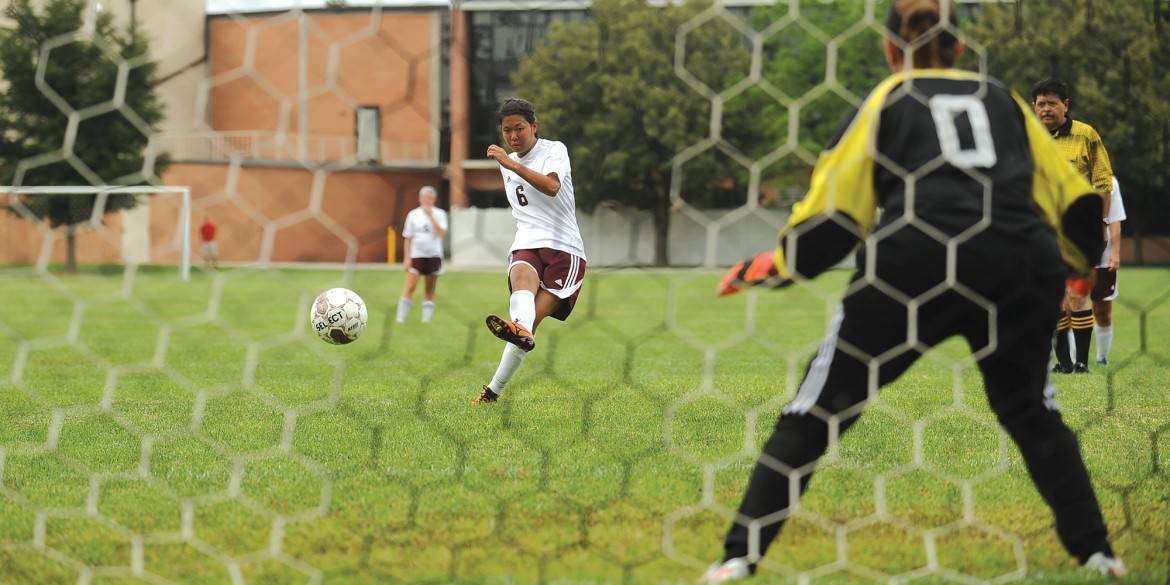 When Hesston College women’s soccer coach Bryan Kehr recruited midfielder Chihiro Hikita ’13 (Hokuto, Japan), he correctly assumed he’d added an unmistakable talent and instant scoring threat. Hikita didn’t disappoint in the fall of 2011, leading Hesston to a then program-best seven wins. What Kehr didn’t realize is that Hikita was the first of many Japanese players who would make an impact for the Larks.

A year after Hikita led the Larks in goals, Kehr added Myu Kobayashi ’14 (Yokosuka, Japan) and Yoshie Ueno ’14 (Tokyo, Japan) to the 2012 roster. Kobayashi exploded onto the college soccer scene in her debut, recording a hat-trick in a season-opening Hesston win. Ueno, meanwhile, was becoming a positive leader and role model on the team – a role that Kehr describes as very significant.

Looking back, the four players’ time with the Hesston program has made an impact on much more than just the stat sheet. Indeed, Hikita, Ueno, Kobayashi and Kanematsu have shared their culture and friendship, along with their athletic talents, with their teammates.

Following her first semester, teammate Jessica Donnelly ’14 hosted Ueno for several weeks at her Gresham, Ore., home, just as she had done for Kobayashi the year before. Now an Oregon State University (Corvallis) student, Ueno’s time on the Hesston soccer team enriched her college experience.

“Playing soccer gave me so many great memories,” Ueno said. “I didn’t have many American friends before I joined the team, but my teammates quickly became like family to me. The relationships I built on the team enhanced my college life a great deal.”

Japanese students have a long and significant international student presence at Hesston, and the recent women’s soccer players from Japan have added to the rich Hesston history of diversity and multiculturalism. Studying in another culture while playing soccer, the Japanese students managed to do some teaching, too.

As part of Kehr’s prescribed monthly team social activity, Ueno and Kobayashi hosted a sushi meal their freshman year. About half the team participated, Kehr remembers, with the other half being a little unsure of Japanese cuisine. A year later, Kehr recalls clean plates and a new-found appreciation for new experiences. This year’s sushi meal has been scheduled for February.

“Coach Kehr taught me so many things through soccer practice and games,” Ueno said. “He gave me a chance to join the team and for that I am grateful. As an international student, playing soccer allowed me to meet many amazing people. Words can’t explain how much I love my former teammates.”

“Through counting in Japanese instead of English, having a Japanese word of the day and learning to make sushi as a team, we’ve all enjoyed having international students on our team,” said Elisabeth Wilder ’15 (Hesston). “It’s been a great way to build relationships across cultural lines.”