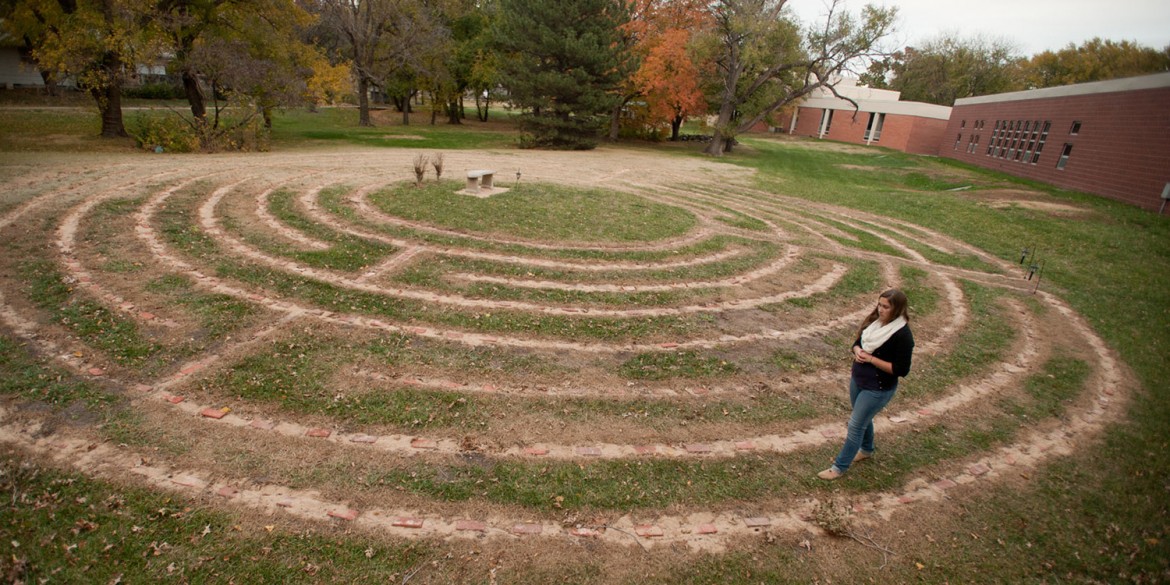 The campus and local communities have a new place to go for quiet contemplation or prayer with the completion of Hesston College’s prayer labyrinth.

Candles lit the path as the labyrinth was dedicated Oct. 30. Bible and ministry faculty member Michele (Schrock) ’81 Hershberger led participants through the labyrinth in prayer while guitar and mandolin music set the mood.

Prayer labyrinths offer a way of praying that brings a person’s whole body into the prayer. Individuals walk toward the center of the labyrinth and back out – a physical action that serves as a reminder of the spiritual action they are taking.

“Our physical bodies and spiritual beings are interconnected,” said exercise science faculty member Clay Stauffer ’99. “The labyrinth, with its walking and praying, activates this interconnectedness.”

The idea for a prayer labyrinth on campus started in 2002 when former physical education instructor Jen (Friesen) ’84 LeFevre returned from a sabbatical where she experienced a prayer labyrinth and thought it would fit well here. By chance, at a meeting of Hesston College Partners, LeFevre was approached and given a donation that became seed money to build a labyrinth. Over the years, LeFevre and students in the Recreational Leadership class also channeled proceeds from the annual class-organized Thanksgiving Weekend Howard Hustle Two-mile Run/Walk for the project.

Materials were purchased in 2013, and the location behind Northlawn was selected in early 2014. First-year Experience students and the women’s soccer team built the labyrinth under the supervision of Miller Construction (Newton) during the FYE Service Week in September.

The committee chose a variation of the Santa Rosa labyrinth design, which is a seven-circuit labyrinth divided into four quadrants including a unique space called the “heart space,” which is an area not walked but serving as a sacred vessel for holding symbols of an individual’s issues, needs or celebrations.

“We hope that this labyrinth will be a sacred space to be used for prayer by the college community and the larger Hesston community,” said Kehr.