Communication for a Global Impact 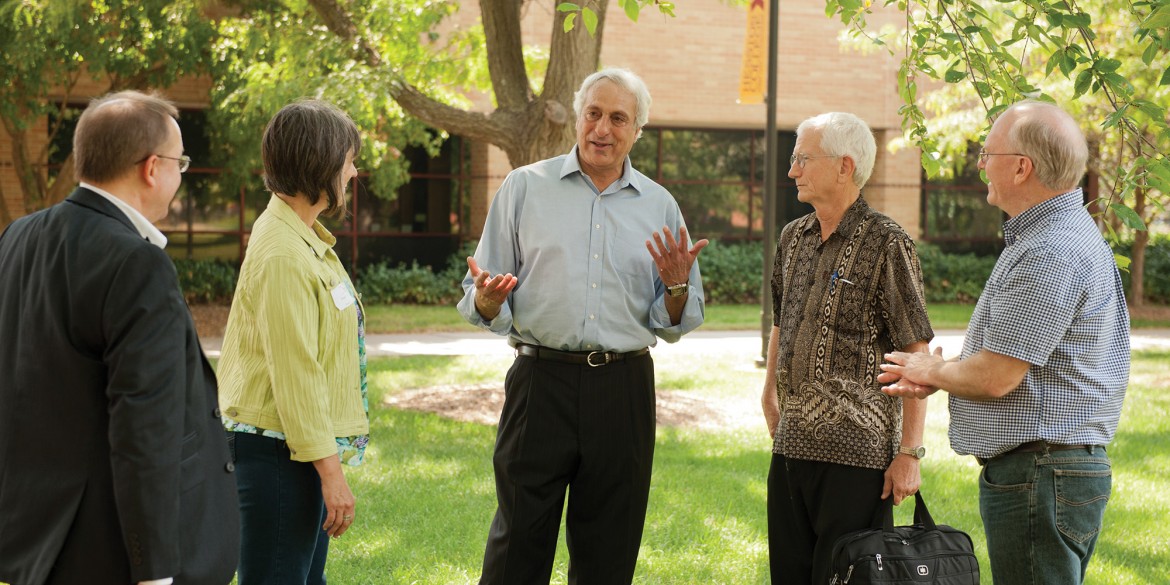 It only takes one conversation with Sadi Othman ’93 to recognize the secret to his success. He’s intelligent, diplomatic and charming with just the right blend of confidence and humility.

Othman, now a vice president of the investment firm North America Western Asia Holdings (NAWAH), doesn’t recall ever having a problem building relationships. He credits his Hesston Experience — especially classes with Jim Mininger Ac61, Phil Osborne Ac61, ’63 and Howard Keim ’72 — as playing a role in developing communication and peacemaking skills that have served him well as he has sought to help bridge the gap between the United States and Iraq.

“My classes at Hesston helped me learn how important communication is,” said Othman following his keynote presentation at Homecoming in September. “I learned to just keep talking with – not shout at – each other. If you disagree, you can still respect others. It takes courage to express yourself in a manner where you try not to hurt the intelligence, feelings or point of view of the person with whom you disagree.”

A Palestinian-American, Othman was hired by the U.S. government in 2003 as a cultural and political advisor to U.S. Army Brigadier General Frank Helmick, then second-in-command of the 101st Airborne Division. The primary task was to help rebuild the infrastructure in northern Iraq. Within a short time, Othman was asked to assist General David Petraeus, then a major general in the 101st, as a linguist and advisor.

“The most valuable instrument in [Petraeus’] effort to influence [Iraqi leaders] was his advisor Sadi Othman,” said author Linda Robinson in her book Tell Me How This Ends: General David Petraeus and the Search for a Way Out of Iraq (Public Affairs, 2009).

Othman’s return to the U.S. in 2010 seemed to provide him an opportunity to start a career in the global business world. His plans were put on hold when the U.S. administration asked him to return to Baghdad for a short-term focused effort to assist the Iraqis in forming a new government following the March 2010 elections.

Following the short-term assignment in Baghdad, Othman joined the business world when he was named vice president of NAWAH, established in 2011 by Hyatt Hotels executive chairman Thomas Pritzker and former Pentagon official Paul Brinkley. NAWAH has initiated investment projects in the Middle East, North Africa and Asia. It was one of the first American companies to make a multi-million dollar capital investment in re-emergent Iraq.

The Iraqi parliament approved newly appointed Prime Minister Haider al-Abbadi’s new government in September, and Othman has since returned to his business career at NAWAH

Othman’s start at Hesston was as unique as his go everywhere experience. He grew up in Jordan, and was in the sixth grade studying at the Mennonite school in Beit Jala, near Bethlehem, when he first learned about Hesston College. Dave Osborne Ac64, ’66 was teaching in the school in his first of what would become 10 years working as a volunteer with Mennonite Central Committee in the Middle East. The teacher-student relationship developed into a deep friendship. Othman recalls wondering, “Maybe I can go to the same school Dave went to.”

After emigrating to the United States, Othman became a citizen in 1977, and started his studies at Hesston as an adult in his 30s. He remembers the campus being empty and hot on his first visit late in the summer of 1991. He immediately wondered whether he would fit in.

He found a place among his classmates, especially Pastoral Ministries students, and is grateful for the ways in which faculty and staff helped guide him. Othman was, in particular, influenced by the Hesston College community’s emphasis on relationships and connecting with others.

“Relationships matter a lot in life, including in your professional life as well as political life,” said Othman. “Circumstances sometimes lead you to places you never expected to go, and that’s where good communication and relationships will always benefit you.”