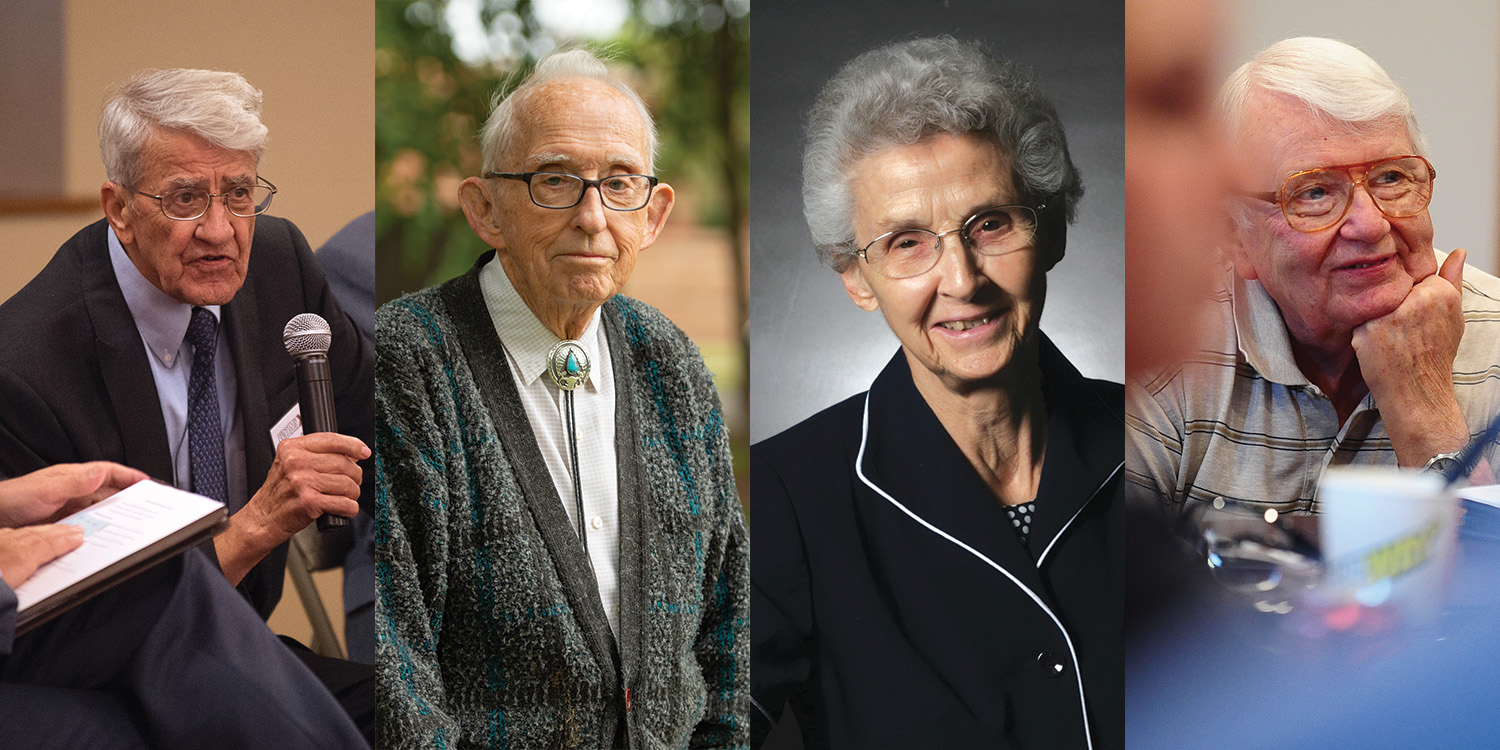 Laban Peachey was president of Hesston College from 1968 to 1980. During his tenure, Hesston College saw significant progress in programming at the college, including the establishment of Hesston’s aviation program and establishing Hesston as one of four colleges in the United States to act as a national resource center for the private sector. After Hesston, Peachey worked as the first vice president of marketing for Mennonite Mutual Aid (now Everence). In his retirement, Peachey remained active in the Mennonite church and higher education from the home in Virginia he shared with his wife, Helen (Mumaw) Peachey, who preceded him in death.

Evan Oswald ’48, showed such a competitive spirit in intramural athletics as a student that President Milo Kauffman encouraged him to pursue graduate studies and return to Hesston to join the faculty. Oswald did just that, serving as physical education prof, athletic director and coaching multiple sports including baseball from 1951 to 1971. He brought intercollegiate athletics to Hesston College, and our baseball stadium was named in his honor in 2001.

Rheta Mae (Hostetler) Wiebe is perhaps best remembered for the profound generosity and hospitality with which she greeted all who met her. Mother of seven and wife of former Hesston College interim president Peter Wiebe, Rheta Mae Wiebe was born in Aurora, Ohio, the middle of three sisters. Through difficult times and sunnier days Wiebe wore a smile. Her family remembers, “She was always very present with everyone she encountered, listening for how she might be able to provide care for them or their situation.”

Lavonne (Roth) ’72 Mullet remembers, “I started consulting with the college in the summer of ’98. About three weeks before classes started in the fall, Marc Yoder asked me to teach the Business Management course. I told him I wasn’t credentialed because I only have a B.S. from Montana State. He assured me my extensive experience made me credentialed. I taught that course and I often conferred with Bill [Mason]. At the end of the semester, Marc asked me to teach the Marketing class in the spring. I told him I would do it provided I could have Bill team-teaching it with me. Bill was finally back in the classroom! We had three generations in the room and it made for some incredible learning. At the end of the semester one of the students wrote on the class evaluation, “Lavonne is smart, but Bill is wise.” We continued to teach together for a couple more years and then I was done with the whole teaching thing but Bill continued on for several more years. He often thanked me for getting him back in the classroom. Bill was such a remarkable man and had a greater influence on my career direction than any other person.”