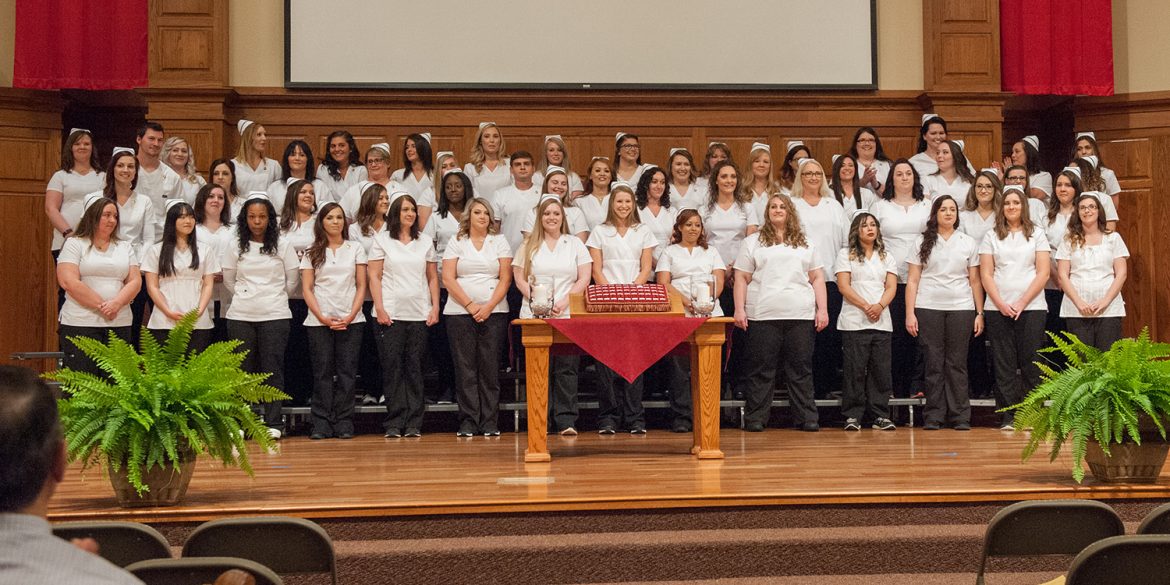 Hesston College’s 50th graduating nursing class was recognized at nursing pinning May 13. The ceremony marked both the first BSN class and the last ADN class.

The college’s nursing program has made another step forward by receiving accreditation for the bachelor of science in nursing (BSN) degree program. The baccalaureate degree in nursing at Hesston College is accredited by the Commission on Collegiate Nursing Education (CCNE), www.ccneaccreditation.org.
The accreditation comes following an on-campus visit by the CCNE in September 2016 and CCNE Board of Commissioners action in late April 2017.

“We were pleased to receive the official news of the accreditation of our BSN program,” said Bonnie (Kauffman) Ac65, ’67 Sowers, Nursing Education director, who ended her role at the end of June after 37 years. “The action acknowledges that our program has met specialized national nursing accreditation standards, and is very important to our students and graduates, as this accreditation offers a competitive advantage.”

Hesston College has operated an associate degree in nursing (ADN) program since 1966, which has held accreditation since 1970. Since 2015, Hesston’s nursing program has been evolving by adding programs in response to shifting industry demands.

After receiving approval from the Kansas State Board of Nursing and the Higher Learning Commission, the college’s accrediting agency, Hesston welcomed the first group of BSN students in fall 2015. That first cohort of seventeen BSN students graduated on May 14, and are considered to have graduated from the accredited program. In January 2017, the program added an RN to BSN component for registered nurses with ADN degrees who want to complete the next step in their education.

Along with the 2016-17 year marking the 50th year of the nursing program and granting bachelor’s degrees to the first BSN graduates, it also marks the end of the ADN program.

“Our nursing faculty wrestled with the decision to close the ADN program,” said Sowers. “We experienced 50 years of excellent ADN education on our campus and graduated nurses who not only provide high quality care but are also the very reason that Hesston College nursing enjoys such an excellent reputation in our healthcare community.”

Sowers noted the difficulty in operating three separate, full capacity nursing programs – ADN, BSN and RN to BSN – on a small campus, and with the current trend toward BSN education, closing the ADN program was the right decision.
“We want to serve our students in the best way possible,” said Sowers.

A new Hesston College cross-cultural experience gave 20 people—a mixture of students from Hesston College and two other institutions, community members and instructors—a chance to study in Japan for a three week May term May 15 to June 7.

The May Term in Japan program incorporated eight weeks of language and culture study prior to departure, as well as an intensive study in modern Japanese history (ca. 1850 to present). Faculty members André Swartley ’99, English as a Second Language program director and Kate (Branam) ’99 Swartley, Spanish instructor, who lived in Japan for two years prior to teaching at Hesston, organized and led the trip. André taught the Japanese language and culture courses leading up to and during the travel portion of the program. Hesston College education instructor Heidi Hochstetler ’00 planned and taught the linked history course.

The group studied and traveled in seven major Japanese cities: Hiroshima, Kagoshima, Fukuoka, Osaka, Nara, Kyoto and Tokyo. The longest portion of time was spent in Hiroshima, where the group attended classes, collaborated with Japanese students at Hiroshima Shudo University and listened to the testimony of a “hibakusha,” or atomic bomb survivor.

In addition to the coursework, students participated in daily activities and projects that required navigating public transportation and using the “survival” Japanese language skills taught in class. Students were also able to stay with Japanese host families in both Osaka and Tokyo, an invaluable experience for making human connections and building bridges between cultures.

The college plans to offer the program again in 2019.

Hesston College took a day off from classes April 20, to focus on college values of service and academic and leadership excellence during the annual LarkFest celebration. To start the day, 234 students participated in 23 service projects in local communities. During the LarkFest awards ceremony, students were recognized for their achievements in academics and leadership. The top award, the Lark of the Year award, went to Elena Buckwalter ’17 (Fulks Run, Va.) for excellence in leadership, academics and service. During the afternoon, students showcased their academic work, including music recitals, directing skills at a short film festival, chemistry and physics demonstrations, speeches and more.