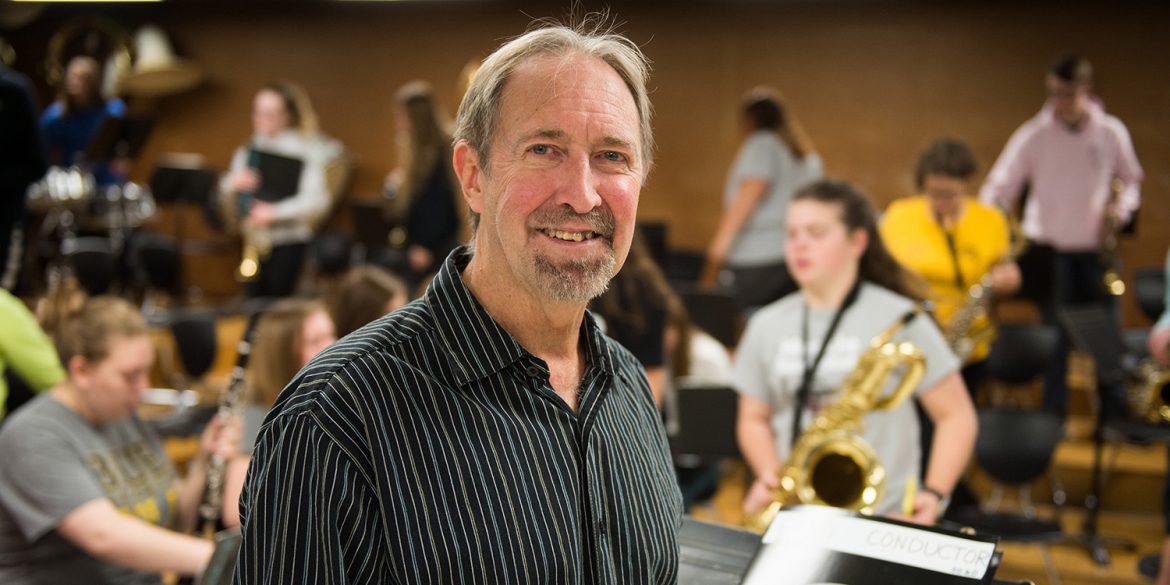 Heartland Community School in Henderson, Neb., has a statewide reputation for an outstanding instrumental music program. The high school band – in which 64 of 70 high school students participate – routinely scores near the top at marching competitions, with several first-place finishes to boast.

Much of the credit for the long-standing success can be attributed to Royce Schweitzer ’69 who has been the band director in Henderson for 44 years of his 47-year career and leads his students with discipline, professionalism and, most importantly, genuine care. That philosophy of education is one he says was demonstrated to him as a Hesston College student.

“I owe Hesston a lot of credit for helping me gain confidence in myself,” said Schweitzer. “My teaching philosophy is, ‘No one cares what you know until they know that you care.’ Hesston modeled that for me. The level of care faculty and staff show each student is what I believe makes it such a great experience.”

Inspired by his own high school band director in Shickley (Neb.), Schweitzer recognized a calling to teach instrumental music himself. With support and encouragement from others who also recognized his gifts, Schwetizer diligently pursued his calling despite situations that could have derailed the plan.

“When I went to Hesston, I hadn’t been away from home very often, so after two and a half weeks, I was extremely homesick,” recalled Schweitzer. “I called home and asked my father if I could come work with him on our farm. Without hesitation he said, ‘You have to stick this out.’ I was devastated, but then after about Thanksgiving, I really started loving being at Hesston.”

Several years later following his first concert as a high school band director, Schweitzer’s father mentioned that conversation to him for the first time.

“Dad said, ‘Do you remember the day you called and asked if you could come home and work on the farm? Saying no was the hardest thing I ever had to tell you, but I knew God had something else in mind for you.’”

The fact that Hesston did not have an instrumental program at the time also didn’t detract Schweitzer. The college worked with him to make sure he was getting what he needed, including taking specialized courses like music theory at nearby Bethel College.

“I was in Chamber Singers and the professor, Randall Zercher, would write trumpet parts into the choral pieces so I would have opportunities to play,” said Schweitzer. “He knew that was something I needed and provided that for me. We also started a pep band that played for soccer and basketball games.”

After Hesston, Schweitzer completed a bachelor of music in education degree at the University of Nebraska-Lincoln before doing two years of alternative service at Lutheran Medical Center in Denver, Colo., where his experience as a physical therapy aid prepared him for another calling on his life.

At 16 months old, his daughter Rachelle Schweitzer ’99 contracted meningitis, leaving her with permanent physical limitations. For much of her life, Schweitzer has been her full-time caregiver.
“I didn’t know that I would have Rachelle who would need physical therapy for most of her life,” said Schweitzer. “But God knew and provided me with knowledge to help her between appointments.”

Schweitzer’s passion for and dedication to his areas of calling is reflected in his students’ successes as well as his own. He’s received education-related accolades several times, and as a father of five, received the 2009 Nebraska Father of the Year award from the Christian Heritage of Fatherhood Initiative. In addition to Rachelle, Schweitzer’s sons are also Hesston graduates – Derek ’03 and Bret ’04.

“For me, teaching and music are vehicles for relating to people,” said Schweitzer. “It’s my love and passion, and I think that’s what gives me the longevity.”