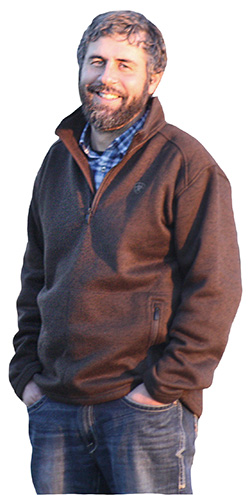 “Every pastor has a different calling story. I didn’t experience a voice from heaven that told me to ‘Go.’ Instead, stepping through open doors prepared me in many ways for leadership at Wood River Mennonite Church (WRMC), a small, rural congregation in a community of about 1,300 people.

Hesston College was impactful for me in many ways. Bib Lit and Peacemaking and Justice sparked my imagination about the Bible and deepened my faith. I then studied peace, justice and conflict studies and Bible/religion at Goshen (Ind.) College.

After college and a summer traveling Central Plains Mennonite Conference (CPMC) as ‘peace evangelists,’ my wife, Elizabeth, and I moved back to my hometown of Shickley, Neb. I didn’t know what I wanted to do, but I knew where I wanted to do it. My dad died while I was in college, and I wanted to be in Shickley as my youngest sister, Kristin Troyer ’17, grew up. I found a job selling tractor and lawn mower parts, and we got involved at Salem Mennonite Church and in the community. I joined the volunteer fire department where I learned about the desperate need for EMTs in rural communities, and became an EMT.

I had been ‘tapped on the shoulder’ to consider ministry several times. I even filled out the Ministerial Leadership Information (MLI) form and interviewed for pastoral positions before I decided I wasn’t ready to pursue a career in ministry. However, I told God, ‘I don’t know what I’m supposed to be doing right now, but I will be right here. When you’re ready for me, come get me. I’ll go where you want.’ I don’t know that it was a great prayer, but it was an honest one. Sometimes, when you’re not sure what to do, you step through the open doors and see where you end up.”

“God came and got me”

“In early 2010, God came and got me. Former CPMC Conference Minister Tim Detweiler ’72 asked if I would fill the pulpit at WRMC. The congregation had just experienced a painful conflict, and my willingness to preach allowed the church elders and conference to find an interim pastor to help the congregation heal. I was a pulpit supply for six months before an interim pastor was appointed. In that time, I learned I was capable of preaching on a weekly basis, and it allowed WRMC and I to get to know each other on a deeper level.

After working with the MLI process and interviewing with the WRMC search committee, I accepted a call to be pastor of the congregation. I was licensed in August 2012 and ordained in July 2015.”

“One of the most impactful verses for my life has been Jeremiah 29:7, ‘Seek the peace and prosperity of the city to which I have carried you…’ I feel a strong internal drive to serve my community and make it a better place.

I find it very rewarding to pastor a church in rural Nebraska. I get to build relationships with all ages, and I have the freedom to incarnate the gospel in the community by participating in local institutions. I am the chaplain and an EMT for the volunteer fire department, and served on a downtown revitalization committee. During the historic March 2019 flooding, the congregation released me from many of my congregational responsibilities and I was heavily involved in the flood response and cleanup. Through this involvement, I serve on the executive board for the Heartland Disaster Recovery Group, a long-term, tri-county flood recovery committee.

When I went to Hesston I figured I would ‘Start here’ and end up somewhere else. But sometimes you start at Hesston and God sends you home!”