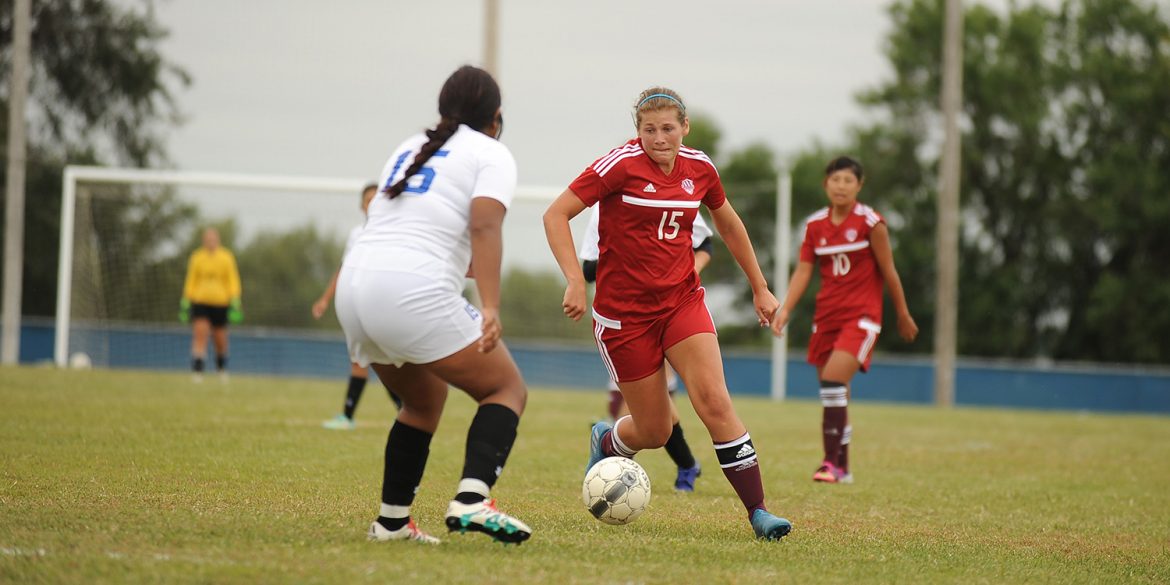 For a second straight year, the Hesston College women’s soccer team unfolded a dominant season, finishing with an impressive 12-6 record – one of the best seasons in the history of the program, and a rash of new names to add to the record book.

The Larks spent a good portion of the season among the top teams in Region VI, making them an intimidating competitor to some impressive teams and earning them a home playoff appearance for the first time in the program’s history. Even more impressive, the Larks played up to the Division I level of the National Junior College Athletic Association (NJCAA).

The college has only had a women’s soccer program since 2007. In fact, between 2007 and 2015, they had an overall record of 56 wins, 98 losses and eight draws. So how are the Larks able to experience so much success now? Kehr was quick to note that this success didn’t happen overnight.

“This team builds on the success of past years,” Kehr said. “We had a great team last year with a 15-6 record, which included being undefeated at home.”

The difference between this year’s team and last year’s team is that this year, the returning players know what winning feels like.

“When players experience these winning attitudes, it becomes easier to replicate them,” Kehr said.

That positive attitude translated to several players seeing their names join the ranks of the best of the best in the record books. Allison Ebersole ’17 (Lafayette, Colo.) and Mika Matsuda ’17 (Kyoto, Japan) took the top two spots for goals (Ebersole-37; Matsuda-34) and points (Matsuda-118; Ebersole-84) in a career. Matsuda also set a career record for assists (50) and nearly matched her season assist mark, with 22 this year. She also set a season mark for points with 60, surpassing her mark set last year by two points. Goalkeeper Cassidy Bontrager ’17 (Wellman, Iowa) is second with six career and season shutouts. Bontrager is also second in season goals against average (1.54) and save percentage (.772). Four more players found places in the top 10 in various career categories.

“Our sophomores have placed their stamp on the program with both their play on the field and their work in the classroom and on campus,” Kehr said. “This year’s team has some special players with great soccer skill, but we are also comprised of players who are working hard and playing for each other.”

Part of the Larks success also has to do with how well the team bonded.

“We began practice with each player and coach sharing their favorite 30 seconds of life that they would love to get to live over,” Kehr said. “Players shared different memories, including quiet time at the top of a mountain in Colorado, the birth of a niece and the moment they were adopted. Learning to know each of these outstanding young women even a little bit is the greatest moment of the season.”