The Ministry of connection: Dallas Stutzman retires from service to Hesston College 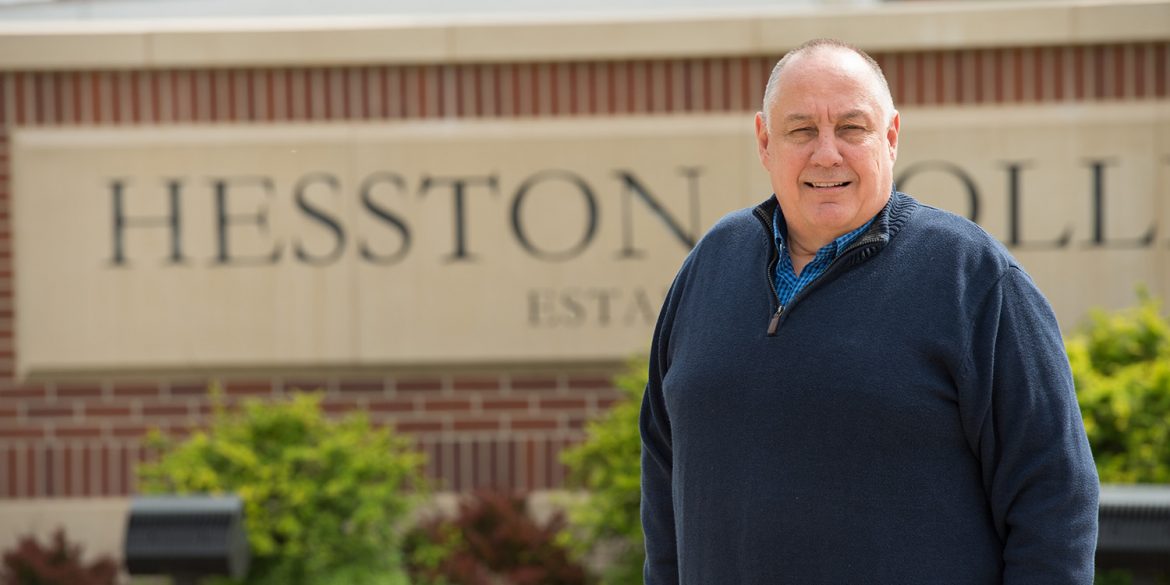 Dallas Stutzman ’76 has often said that he was destined for Hesston College. When he was born, his parents, who were not Hesston alumni, received a letter from the college congratulating them on his birth and hoping that in 18 years he would choose to start here.

He did just that, saying, “It was the only place I considered for a lot of reasons,” and later dedicating most of his career to advancing the work and mission of Hesston College.

Stutzman retired on June 1 from a 33-year career in service to Hesston College that included roles in admissions, teaching economics, assistant basketball coach and, for most of his career, Director of Alumni and Church Relations. No matter what the role, Stutzman excelled at highlighting the special way relationships grow in the Hesston College environment before flourishing for a lifetime.

“My work at Hesston allowed me to integrate my work career as a ministry and a call,” said Stutzman. “I was able to live out my faith in my occupation, and I always thought that was really special.”

As so many alumni also attest, the Hesston student experience was transformational for Stutzman. After finishing a business degree at the University of Northern Colorado (Greeley) in 1978, Bill Mason recruited him to return to Hesston College to work in Admissions.

“My two years here as a student were such a good thing; why wouldn’t I want to work here,” Stutzman reflected. “Even though I didn’t necessarily have the experience coming in, I felt so empowered to do my work here. Bill was so good at extending opportunities to employees to use their gifts and skills in much the same way Hesston students have opportunities to experience and grow.”

After four years of working in Admissions, Stutzman took a hiatus from Hesston College to pursue a career in business, doing financial planning and selling investments and insurance. In 1991, he felt a call back to Hesston, and he pursued that call as a kind of ministry.

“At that point, it felt like this is what I’m called to do in terms of my life’s work,” he said.

Stutzman approached his work with a vivacity that earned him a reputation of excellence among career peers and as the unofficial “face of Hesston College” for the many alumni and pastors with whom he connected regularly. Each year was filled with special alumni events around the country, visits to churches, connecting students with alumni and friends, and the hallmark of each year, Homecoming Weekend.

“I was part of 22 Homecoming Weekends, and helped with planning for the 23rd [planned for September 24 to 26, 2020],” said Stutzman. “People come back to homecoming for all kinds of reasons, but one of the most significant reasons, and one I saw happen every year, is it’s a chance for people to heal and to sometimes move on from what may have been holding them back.

“Whether it was a hurt that happened here or an experience from somewhere else, Hesston College is such a safe, secure place that, even after their Hesston Experience is over, people still view it as a place they can be vulnerable and share honestly about who they are with people who knew them from a past context. Knowing we can be the vessel to help healing and growth happen at many life stages is very significant and fulfilling.”

With a career that has spanned five of the college’s presidents and four interim presidents, Stutzman has seen a lot of change. But what hasn’t changed, he said, is the way Hesston impacts lives.

“Relationships and community and those life-changing elements of spirituality and transformation – that’s what the Hesston Experience is,” he said. “I experienced it as a student and it’s still that way today. It has transcended time.”

Retirement from a fulfilling career will bring many changes for Hesston College and for Stutzman. But change – specifically losing his wife, Jan (Unruh) ’72, former staff, Stutzman to ALS in December 2018 – is what brought him to taking the step into retirement.

“I’ve had a lot of change in the last couple of years,” he said. “It’s time to reassess and see what the future could be. It’s retirement, yeah, but I don’t want to look at it like that. It’s just a whole new thing with voluntary service and spending time with my kids (Todd Stutzman ’08 and Kara Stutzman ’14) and traveling. I want to take what Hesston represents into new settings – to experience the shared values and purpose with people from across the spectrum of diversity and cultures and backgrounds. It’s start here, go everywhere in a new way.”