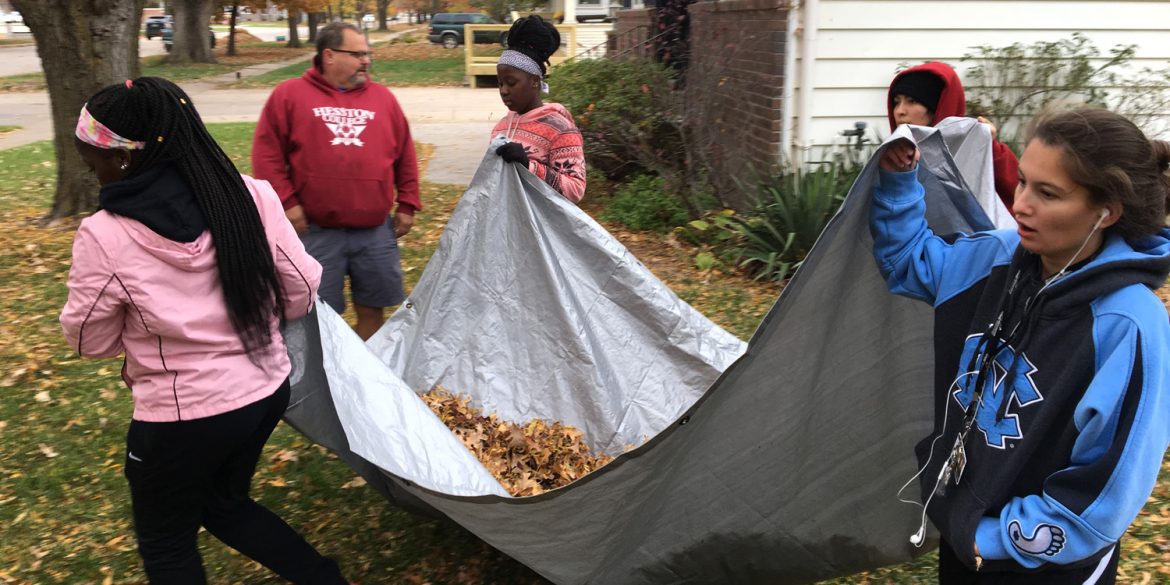 Members of the women’s soccer team move a load of leaves during a Saturday Athletic Department service project where all student-athletes and coaches raked leaves in the community. Photo by Jaden Hostetter ’19.

There are a couple schools of thought on college athletics; perhaps even on athletics in general. What’s their purpose in the grand scheme of life and vocation? After all, the vast majority of student-athletes won’t make athletics a career.

Hearing presentations from alumni and former athletes during the college’s homecoming celebration in September brought forth a unanimous opinion on the matter: Athletics matter to the college experience and benefit life in general.

“In general, athletics, or competing, brings a different element to a student experience,” said DeeDee (Martin) ’02 Landes, Hesston College volleyball coach. “Athletics gets to the bottom of your heart, to the rawness, and sometimes it exposes the hard things like pride and selfishness. Experiencing that with a team provides opportunities that don’t happen just in the classroom or academics. I think student-athletes have more opportunity for personal growth than other students because they are faced with that exposed rawness and have to figure out how to work through it for their own benefit and the benefit of the team.”

“Athletics can be a bad thing and it can be a great thing,” said Chris Nachtigall ’01, Hesston College athletic director. “It can become bad when it’s focused on the glory it can bring or if you worship it and make it the center of all you do. But athletics develops so many things. Of course there are physical benefits and learning to take care of the physical self, but for me personally, it’s also helped develop me spiritually. It’s given me a self-discipline that feeds my relationship with Christ. It creates community, and, done right will create young people who will serve others their whole lives.”

Landes’ and Nachtigall’s perspectives come from experiences as former players and college coaches. Both were double sport athletes at Hesston. Landes played volleyball and basketball and continued both sports at Goshen (Ind.) College while also undertaking the demands of a nursing degree. Nachtigall played soccer and baseball, and prior to coming back to Hesston to serve as athletic director, coached softball at Northwestern College (Orange City, Iowa). Both also point to their time playing sports as the setting for various life lessons and character-building experiences.

“As a freshman basketball player, I took a sophomore’s starting spot,” recalled Landes. “I remember thinking, ‘Here we go, she’s going to hate me, but I’m just going to stand my ground and keep working hard.’ Instead, she came over to me and said, ‘DeeDee, you deserve this. I’m so proud of you and I’m your biggest fan.’ I would have never done that – I was too prideful – but to see humble servant leadership modeled in that way really impacted me.”

A similar experience was true for Lynn Fielitz ’79, a Hesston College track athlete who later played men’s volleyball at George Williams College (Downers Grove, Ill.) and has been a physical education faculty member and volleyball coach for nearly 35 years. Fielitz has led NCAA Division I programs such as the University of Tennessee, the University of Rhode Island, Virginia Commonwealth University and others.

“As an athlete, some of my biggest take aways from my college experiences were outside the classroom,” said Fielitz. “Experiences and interactions I had with my coach, Gerry Sieber ’64, on the track and in the van on the way to a meet are the ones that stick with me. The connections you can make when you’re not worried about whether you’re going to pass the test gives coaches an edge if they have the right philosophy and attitude. Good coaches have the opportunity to walk with their athletes through the highest of highs and the lowest of lows. The way a coach responds to those situations – hopefully with a balance of gentleness and constructive criticism – can have a lasting impact on a person as a player and on a personal level.”

As is true with many parts of the Hesston Experience, the way the college approaches athletics is, to those who have experienced other programs in addition to being a Lark, a little bit different and more than a little special. With about 37 percent of students filling athletic roles in fall 2018, it’s also the second largest program on campus, lagging just a little behind nursing.

Arriving in September, Nachtigall has been in his role at Hesston a short time, but he’s hit the ground running to define practices that have long been in place with Hesston Athletics that make it stand apart from other programs and help explain Hesston philosophy of college athletics.

“I love to focus on vision and culture,” said Nachtigall. “There’s no way to know where you’re going if you don’t have a vision for it; you’re going to wander aimlessly. So coming in I wanted to cast a vision for what we’re going to do and what we want to see happen. My predecessor, Rob Ramseyer, did a tremendous job of laying a good foundation, of establishing values for the program. I’m trying to take that a step further by figuring out how we will live out those values.”

Nachtigall’s vision, being defined as a new concept of “The Lark Way,” is based on Hebrews 12:1-3, acknowledging Jesus, “the pioneer and perfecter of our faith,” at the center of the work being done. It also brings a holistic view of the individual and focuses on whole person development rather than strictly athletic development.

“I don’t know that I’ve heard of any other college that would say, ‘If your sport is the only reason you’re coming here, you’re not the right fit,’ but that’s true here,” said Landes. “We want students who engage in some other piece of Hesston apart from just athletics – the culture, the mission, the academics, the social life. If they don’t buy into the incredible opportunities Hesston can offer, they won’t buy into the Lark Way and they won’t have a good experience. I tell my young women that I don’t expect them to be the same as me or a teammate – they may believe differently or be at different spots in their spiritual journey – but I want them to each be challenged and grow through their challenges and become more confident in their beliefs.”

“Being part of a team doesn’t mean you see eye to eye with everyone on the team, but you have to learn to work together toward a common goal,” added Landes. “You have to learn to respect each person’s contribution. That’s life, too. It’s a good learning experience.” 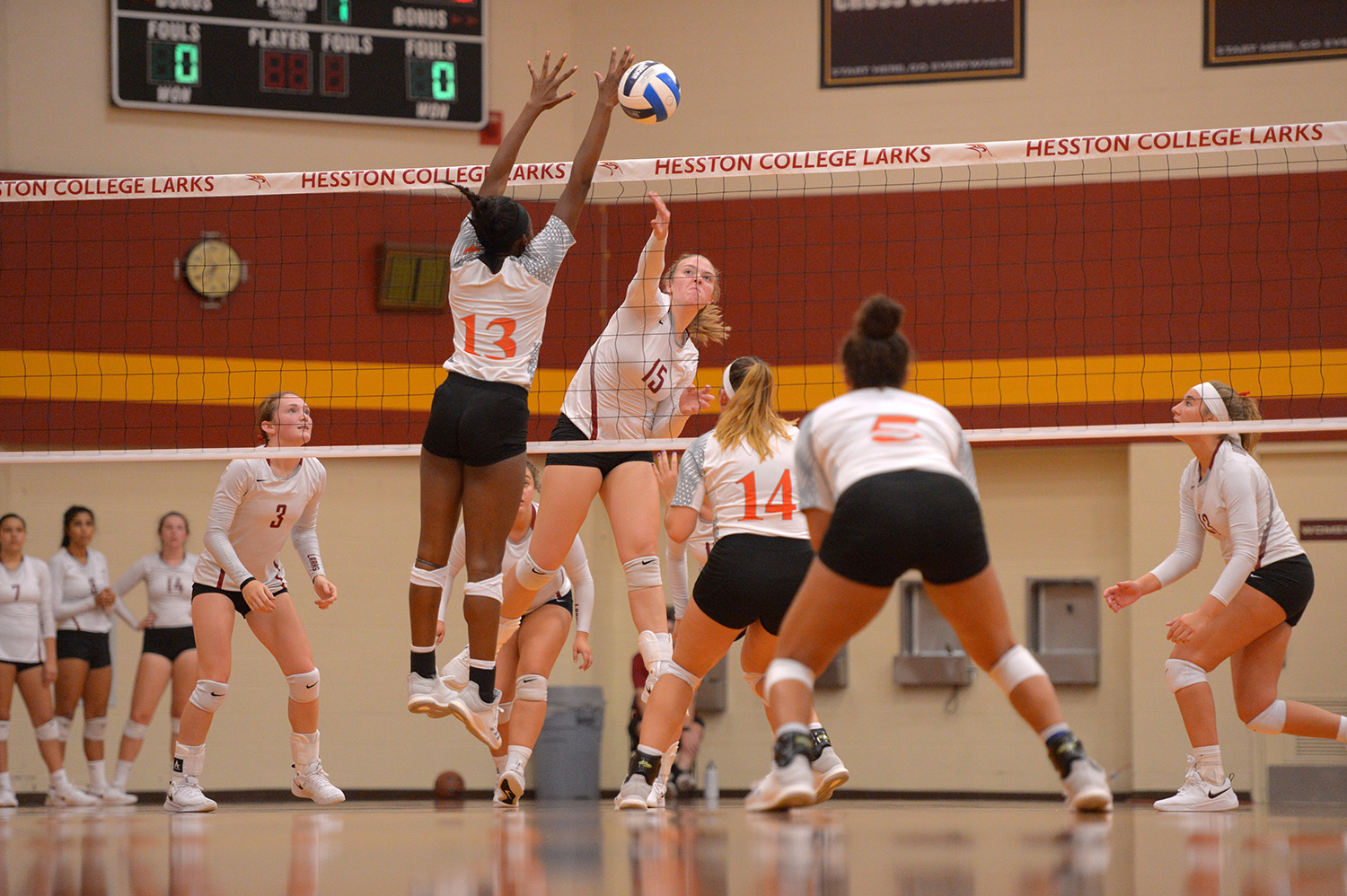