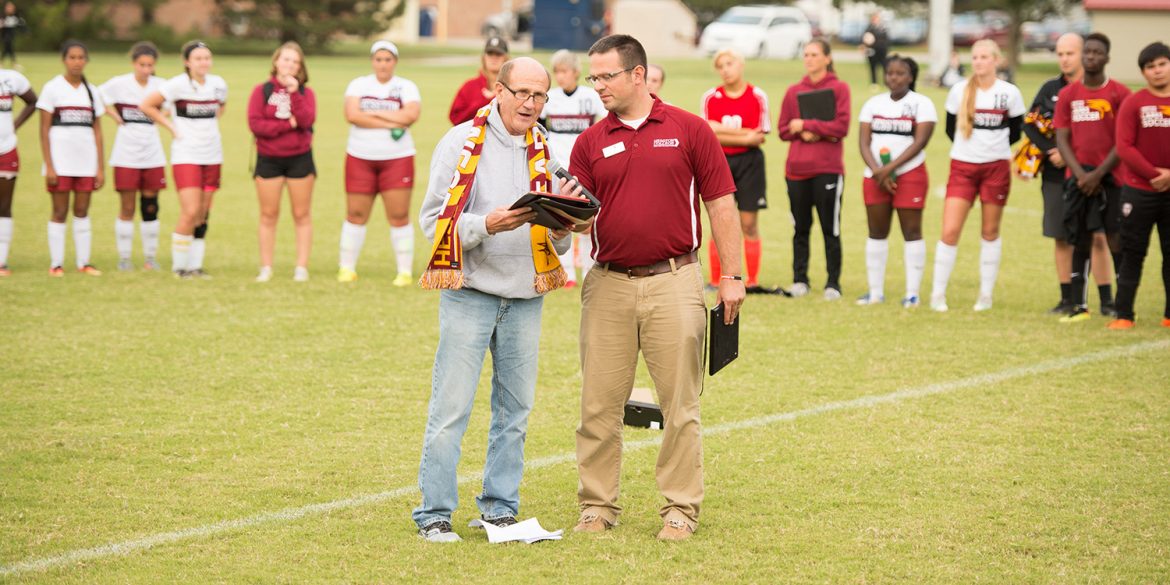 Gerry Sieber addresses the crowd at the dedication of Sieber Field.

The Hesston College soccer field underwent some upgrades before and during the 2018 season. Leveling and resurfacing took place during the summer and a new scoreboard was installed in September. The transformation was complete Sept. 29, during Homecoming Weekend, when the field was named Sieber Field in honor of Gerry Sieber ’64, who coached Lark student-athletes in several sports for 30 years – 23 of which were as men’s soccer coach. “We are grateful to Gerry for his many years of dedication to Hesston College and our student-athletes,” said President Joseph A. Manickam. “His commitment to the school, our students and the Hesston Experience deserves recognition in this lasting way.” 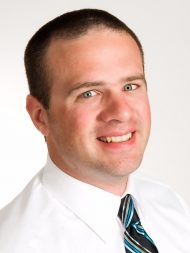 Chris Nachtigall ’01 assumed the role of athletic director at Hesston College in September. Nachtigall holds a bachelor’s degree in sports management from Iowa Wesleyan College (Mount Pleasant) and a master’s in coaching and athletic administration from Concordia University (Irvine, Calif.). While at Hesston, Nachtigall played baseball and soccer. “One thing I loved about my experience as an athlete at Hesston was that I could also be involved in many other things,” said Nachtigall. “I got to lead as a resident assistant and be involved in campus worship and intramurals. The experience helped shape me into a well-rounded leader on and off the field. It is what excites me about being back at Hesston – giving unique opportunities to develop young people into leaders.” Nachtigall’s professional journey includes work as a program director, physical education teacher and high school basketball and softball coach. Most recently, he was head softball coach at Northwestern College (Orange City, Iowa) for seven years.

In the summer 2018 issue, we reported on student-athletes who were recognized as Academic All-Americans by the National Junior College Athletic Association for 2017-18. The following students were unintentionally left off the first list. In total, 42 student-athletes – 24 percent of Hesston’s total student-athletes – received the honor.