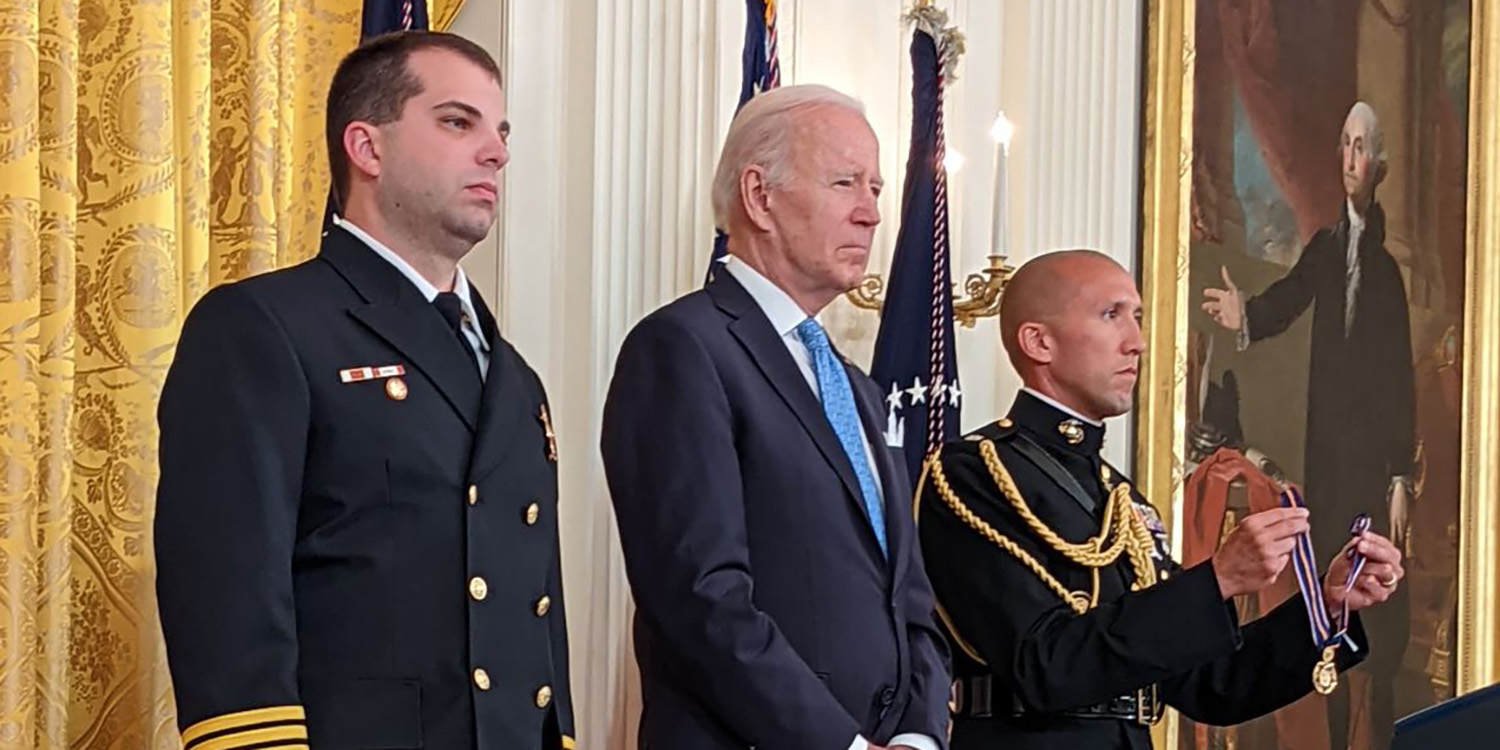 Hesston College graduate Ryan Sprunger ’11 was awarded the Medal of Valor on Monday, May 16, 2022, by President Joe Biden. Sprunger, along with 14 other recipients from the 2019-20 class, received this honor for “extraordinary valor above and beyond the call of duty.”

In the East Room of the White House, President Biden honored fifteen individuals with the Medal of Valor, the highest honor a President can bestow on a public safety officer. This award is given to those who have exhibited exceptional courage, regardless of personal safety, in the attempt to save or protect others from harm.

On December 22, 2019, in Kidron, Ohio, Assistant Chief Sprunger was leaving church and was headed home when he heard a call from his station that two boys had fallen through the ice into a pond. He was closer than the fire station and time was crucial to save the children. When Sprunger arrived, he found a grandfather and one child in the pond struggling to stay afloat. With a short rope and a small life vest in hand, he made it to the edge of the ice shelf just in time to see them go under the water. He jumped in church clothes and all and was able to pull them out to the surface. The second child was recovered by a crew arriving at the scene. Sprunger attended to the victims until medical personnel took over.

“I was very humbled to be in the company of the others who were also receiving the award, to hear their heroic stories,” Sprunger said about the ceremony at the White House. “It was humbling to be alongside them receiving the same award.”

Sprunger also received the Ohio State Valor award in November of 2020. His actions continued with the launch of a life-saving project. Named in memory for the child lost during the rescue, Jenson Rescue Ropes are now installed at ponds and bodies of water throughout the East Wayne area.

Present for the White House ceremony was Sprunger’s wife, Colleen. Sprunger is a third-generation firefighter and a second-generation Hesston College graduate and holds an associate degree in aviation from Hesston and a bachelor of science in ministry from Tabor College in Hillsboro, Kan.