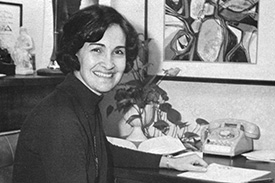 It was not just her joyous spirit and her overflowing compassion, but also through faith and with grace Naomi Lederach touched the lives of so many. She began her journey in South Texas as a child of missionaries and followed a path into nursing, leadership, social activism and most dear to her heart, motherhood. For 68 years, her husband, best friend and coworker John shared in the life they created and in the joy of their three children. In 1968, both became faculty at Hesston College, with Naomi joining as a foundational member of the nursing program. “She is often remembered for the mental health nursing course and clinicals,” Marilyn Unruh Flaming, academic assistant, School of Nursing, shared. “Alumni can recall the videotaped mock nurse-patient interviews she and Bonnie Sowers created and acted out to help students learn about therapeutic communication.”

Together, Naomi and John lived, worked and volunteered in Indiana, Oregon, Kansas, Pennsylvania, Northern Ireland and Jerusalem. In Jerusalem, Naomi taught at Bethlehem University and helped create the curriculum for the Arab School of Nursing in Ramallah. Flaming added, “Naomi lived out her faith every day in community, seeking to be loving rather than judging. She was beloved by all and a mentor to so many of us.” 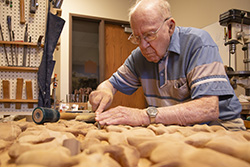 During an interview in 1998, Hesston College art professor Paul Friesen said, “For me, the key to stewardship is to what extent I love, to that extent I am willing to give myself.” Paul and Wilma’s life was one of kindness, creativity and above all, stewardship. He established the art department at Hesston College in 1956 and nurtured it through its years in the potato cellar of Green Gables, through the basement of Erb Hall and into its own building named in his honor. His love of creating art was interwoven into his faith. Paul’s son Jon shared, “Dad was a pastor first, who could not separate his artistic gifts from his ministry.” His childhood was spent in India with his parents as they served as missionaries. His experiences there blessed him with appreciation and perspective that touched the rest of his life.
His work with the college also led him to build relationships with churches nationwide. Along his travels he would often speak of the parable of the potter from the book of Jeremiah and gift his listeners with his own artwork: clay pots. The father of six children and the loving husband of his wife, Wilma, Paul served in life to all that surrounded him. Generations of Hesston College art students, community members and beyond will feel the loving imprint left by him for years to come. When asked, Paul shared many years ago, “I’d like to be remembered as a friend.”