A New Generation of Engineers 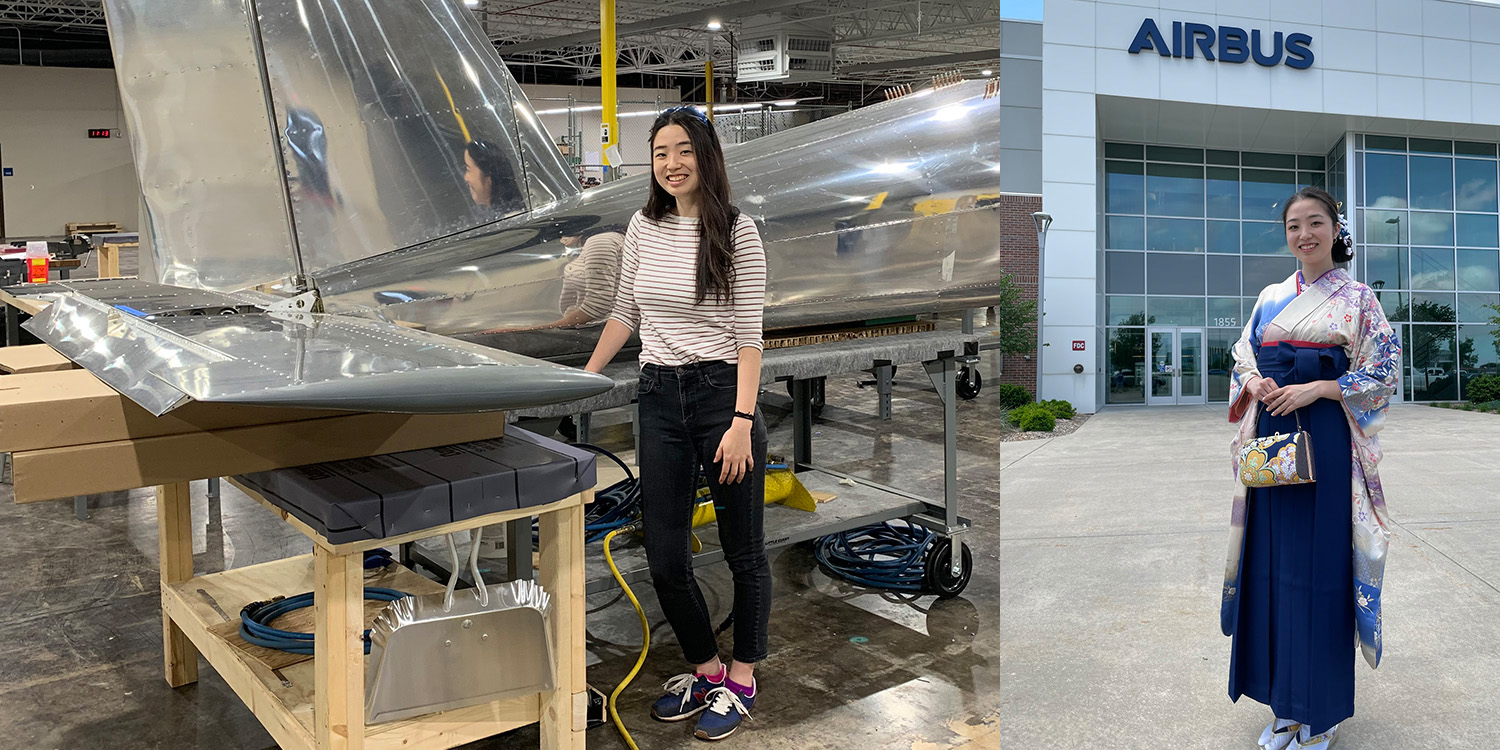 Over its long history, Hesston College has graduated individuals with hearts and minds bent to engineering. Many of those alumni are well-established or have retired, but just as many are in the thick of their careers. Still others are taking their first steps on their career paths. Here, four HC alumni talk about what engineering means to them.

“Just looking at the sky amazes me, she said. Seeing a piece of giant metal flying through it.”

Her passion for flight first led her to consider a career in air traffic control, before deciding that she wanted a degree with more career options. Suzuki soon arrived at Hesston College with an increasing interest in aerospace.

“I’m more of a science and math person, rather than literature,” she said. “So that kind of made my decision.”

In her small-sized classes — she was one of only two students in her statics class — at Hesston College, Suzuki says her professor, Joel Krehbiel, provided an atmosphere for learning that has since influenced her career success.

“Those [classes] built my foundation for becoming an engineer, she said.

“After I transferred to WSU, I took a lot of aerospace classes, but what I have been using [in my work] are the classes I took at Hesston: statics and physics,” she said. “It’s kind of funny that I went through all the fancy classes, but now I’m using the [skills from the] basic physics classes.”
Suzuki graduated from Wichita State University (WSU) this spring and was offered to turn her internship at Airbus, a European aerospace corporation, into a full-time job, where she will soon have opportunities to travel to other Airbus locations in Alabama and England.

“I’m a stress engineer, so I’m on the verification side, making sure that a design is going to work,” Suzuki said. “Is it strong enough? Does it meet the requirements? [It’s] a lot of Excel and a lot of math.”

Though Suzuki transferred from Hesston College to find she was one of only several female aerospace engineering majors at WSU, she sees both qualifiers as benefits to her career.

“At Hesston, just getting to know the professor and then learning in a smaller environment was very helpful and helped me understand the subject better,” she said.

Suzuki is currently working on an Airbus project aimed at turning an existing aircraft into a cargo plane that will launch in 2025. As she explains her role in the project, which can sound quite unfamiliar to a non-engineer, she is sure to emphasize that she’s “still learning.”

Like many Hesston College graduates, Suzuki came to Hesston from Japan as an international student. She is currently waiting to hear about her application approval for a six-year work visa, but returning to Japan is not out of the question.

“I want to return at some point in my life,” she said. “If I get a job that doesn’t require me to be on-site, I’ll be more than happy to return.” 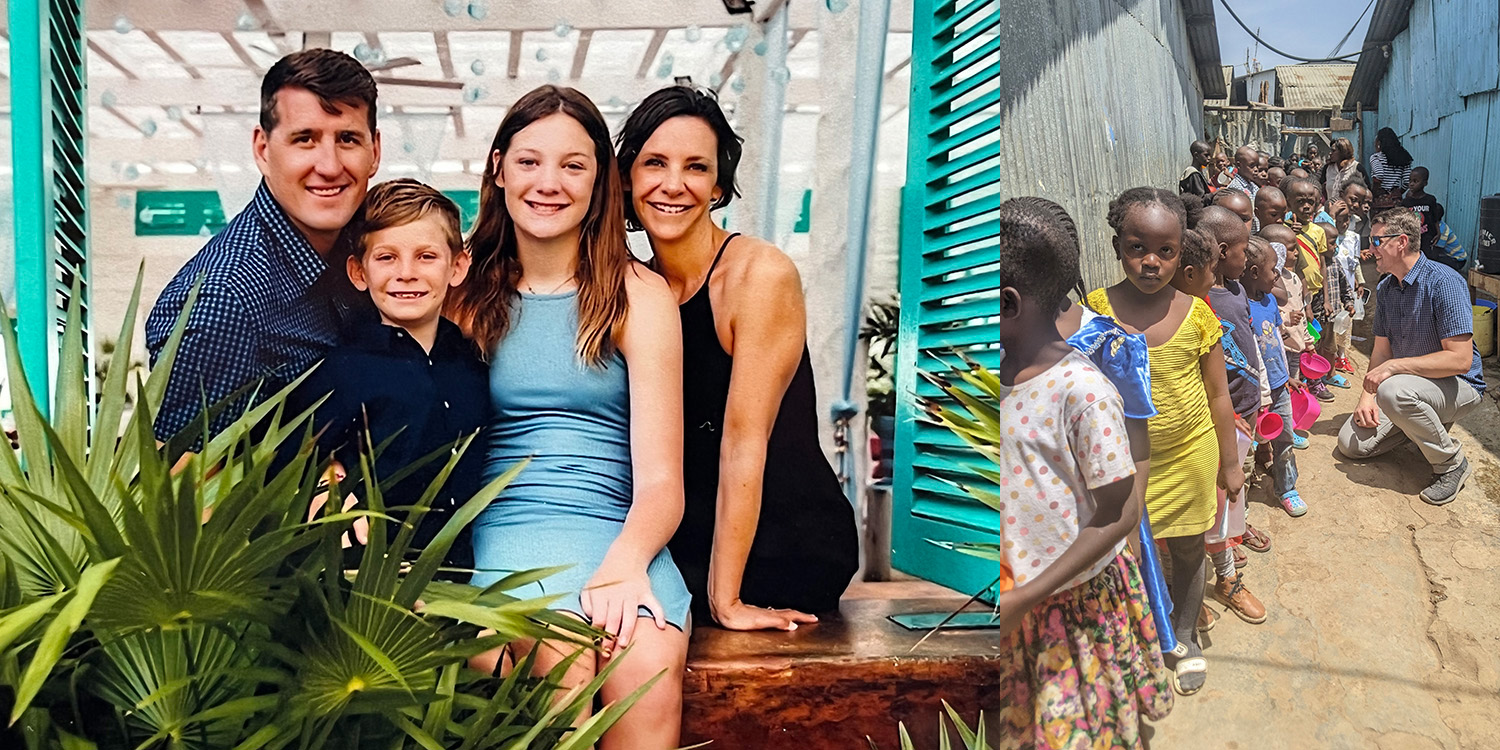 Steve Martin thought he was going to be a doctor.

“Engineering wasn’t really something I had considered prior to my education at Hesston College,” Martin said.

“I really enjoyed chemistry at HC, and learned a lot from Jim Yoder ’62 who was instrumental in my pursuit of a degree in chemical engineering.”

It was Martin’s love for science and the influence of beloved teachers at Hesston College — Jim Yoder, Jeff Baumgartner — that led Martin to commit to chemical engineering during his sophomore year. He even remembers a guest presentation about agricultural engineering in chemistry class that further solidified his path forward.

But Martin’s education at Hesston College was more than preparation for a transfer to Colorado School of Mines or for his engineering career and current role as the operations superintendent at CHS McPherson Refinery, America’s largest cooperative refiner that works to maximize diesel production.

“At Hesston College, I knew I would get a well-balanced education outside of just science and math, and that was important to me,” Martin said. “Classes like Bib Lit [Biblical Literature] and similar courses helped to give me a well-rounded approach to my education and early career selection and development.”

Martin has carried this desire for balance into his career and onward. He oversees the day-to-day unit operations, personnel, project prioritization and long-term planning in his current role. Previously, he managed the environmental department that was responsible for maintaining regulatory compliance for the refinery.

“Both positions rely on my engineering background and I have benefitted from a well-rounded academic approach to earning my degree,” he said. “I really enjoy my job, and feel like I maintain a good work/life balance while having new challenges daily.”

In addition to his engineering role, Martin supports his wife, Kristi Martin, HC nursing prof, in her role as co-founder of Anistemi, which means “to raise up.” The Martins, together with board members, work to provide opportunities through education, skill building, microlending and relationships that may allow the people in the communities they serve to raise themselves up and out of poverty. Drawing on trusted relationships with elders in Africa, the founders of Anistemi began making a difference in the lives of those living in the Democratic Republic of the Congo and the slums of Nairobi, Kenya.

Martin notes that he, like many Hesston College alumni, has been asked if he enjoyed transferring after graduating from Hesston College. He acknowledges that, now, engineering students won’t have to.

“Given the chance again, I would absolutely attend Hesston College 100% of the time,” Martin said. “The exposure to different areas of academics outside of engineering, the amazing friendships and having a faith-based focus on my education was well worth it. 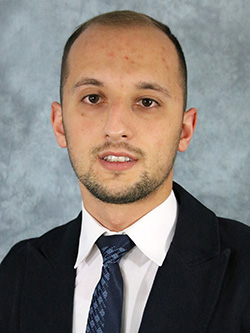 For Gaitan Lleshi, becoming an engineer was always the goal, but so was attending Hesston College.

Lleshi attended Lezhe Academic Center in Albania during high school and remembers other classmates who enrolled at Hesston College and traveled to Kansas before him.

“That’s kind of how I heard about Hesston,” said Lleshi, who had always wanted to move to the United States. “And they [Hesston] made it happen for me.”

Though the career field was clear, partly inspired by Lleshi’s sister who studied civil engineering in Albania, Lleshi remembers being unsure of which aspect of engineering he wanted to focus on when he started at Hesston College.

“I was 100% sure I was going to do engineering, but I hadn’t decided between civil engineering, mechanical engineering and electrical [engineering],” he said. “Growing up, I was really drawn to hands-on activities, like trying to take things apart and put them back together.”

In addition to his calculus, physics and STEM classes, Lleshi also started working for the information technology (IT) department at Hesston College and even served as a resident assistant during his sophomore year.

“I was really curious to know how things worked,” Lleshi said. “And I got a good grasp of the material because of the kind of relationships I had with other students and with professors.

“I think I was prepared very well at Hesston,” he said. “As far as classes, I felt like I was very well prepared; I had no issue whatsoever.”

Lleshi is, however, eager for the engineering program to launch at Hesston College, as he noted the biggest barrier to immediate success at WSU was the lack of engineering experience and internships.

After many applications and one internship, Lleshi was hired at Bunting Magnetics Company in Newton, Kansas, where he works as a design engineer and “really loves” his role in the process.

“I have to design everything [on a project] that they ask for,” he said. “And once they approve my plan, then I kind of go ahead and complete the design for the model that they need. And we build it right there [in Newton] for them.”

Lleshi plans to continue in this role and to stay in Kansas for the foreseeable future, or as long as his visa allows him to do so.

“I had a great time [at Hesston College], because I just started doing math,” Lleshi said. “And I guess the way that the professors were teaching that kind of class and everything just fell into place.”

When Philip Hochstetler ’12 graduated high school, he knew where he wanted to go next: Hesston College.

“Pretty much everyone I’m related to has gone to Hesston College – my parents did and so did many of my cousins,” he said. “We lived just a few hours away in Nebraska.”

What Hochstetler didn’t know though was what he would study. He knew he liked math, so he enrolled in Calculus II and a career development class.

“After the career development class, I looked into it [engineering] more,” Hochstetler said. “I didn’t know what else I wanted to do, so engineering seemed like a decent option.”

As part of the career development class, Hochstetler shadowed an engineer at the nearby Excel Industries, a leading manufacturer of premium commercial and residential turf equipment located in Hesston.

“The hands-on application more than the actual classes is what really interested me,” he said.

Hochstetler quickly committed to engineering, enrolling in math and physics classes while at Hesston before transferring to the University of Nebraska to pursue agricultural engineering, which he notes is much like mechanical engineering.

During his summers between semesters at University of Nebraska, Hochstetler would travel back to Hesston, where he interned at Excel Industries through connections made via Hesston alumni.

“Knowing people from Hesston College, you find someone who also went there and you make big connections,” he said. “And I felt like I had a much better experience at Hesston College in a small classroom compared to the huge classes at a university.”

Hochstetler returned to work at Excel Industries on the deck design group for four years after graduating in Nebraska. Since then, he’s dabbled in engineering for Veada Industries Inc., a company that makes tire recycling equipment, and now works for Viewrail as a product development engineer, designing custom stairs and railing.

“The skills you learn and even the company organization can carry through to from one position to the next.”

Hochstetler often sees a project through from start to finish, designing a product to the best of his ability using 3D CAD (computer-aided design) software. For now it’s a good fit, but Hochstetler is open to other possibilities.

“I guess we’ll see what happens. Even when I was deciding what to do for a career, I knew engineering could open a lot of doors,” he said. “With an engineering degree, you can do a lot more than engineering.”