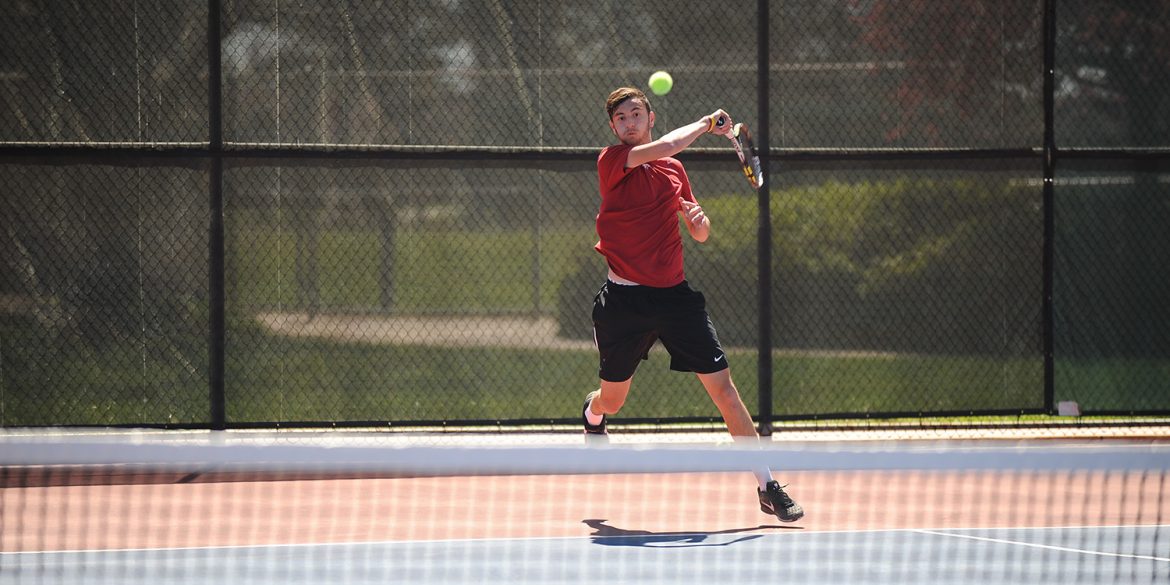 Our mothers can be our biggest fans, our motivator, our teacher, our greatest blessing.

They countlessly put themselves before us and go out of their way to help us.

But sometimes our mothers make us do things we do not want to do.

The latter was the case for Nadeem Jaber ’18, a freshman from Israel. Jaber came to Hesston College in the spring of 2017 to be a tennis player, thanks to his mother pushing him to play tennis, and now he plays at the number one spot for the Larks.

“One day I was going from school to my grandparents’ house and my mom was there and she told me that she signed me up for tennis,” said Jaber. “I said okay. I didn’t know what that was.”

As a child, tennis wasn’t even an option for Jaber. Soccer was his sole focus.

“I didn’t know what tennis was. I always liked soccer very much,” Jaber said. “My dad was a professional soccer player; I wanted to be like him. I always watched him playing and I saw him enjoy his time, so I always told myself ‘I’m going be like him. I want to play soccer and, I want to prove I can.’”

But, in order to prevent injuries, Jaber’s parents wouldn’t let him play soccer. So tennis it was.

“The next day I found myself on a tennis court with a tennis coach and I had a tennis racket in my hand that was bigger than my head,” said Jaber. “I didn’t know what to do; I just started hitting the balls. From that day on, I just enjoyed it. But I still love soccer, too.”

Although his adjustment to Hesston has been difficult – he credits the weather specifically – Jaber chose it despite other offers for a specific reason.

“I chose Hesston because I felt comfortable with their offer and their scholarship was very good for me,” said Jaber.

And since he’s been here, he hasn’t regretted it.

“The best experience so far has been the people,” he said “Everybody is so friendly here and very nice. Everyone is willing to help you no matter what. I like that very much. They don’t care if I’m international or American. This is how it should be.”

Tennis is still the highlight for him here. For his first season at Hesston, Jaber has high expectations for his team.

According to his coach, Chance Joost, Jaber’s enthusiasm to win isn’t something he just keeps to himself.

“On the court, Nadeem’s been a great asset because he’s been able to push some of our other guys down the line up which makes our team stronger,” said Joost.

But this enthusiasm isn’t something that’s just now starting to show.

“Nadeem had a really good first impression,” said Joost. “One thing that really stood out was he sent a text every night to the team, talking about getting better and having a positive attitude and lifted some guys up that were down. Definitely left a good impression on me that someone would come in from halfway across the world and be a team leader from the get go.

“On and off the court Nadeem’s been exceptional and everything I could possibly of asked for as my first international recruit.”