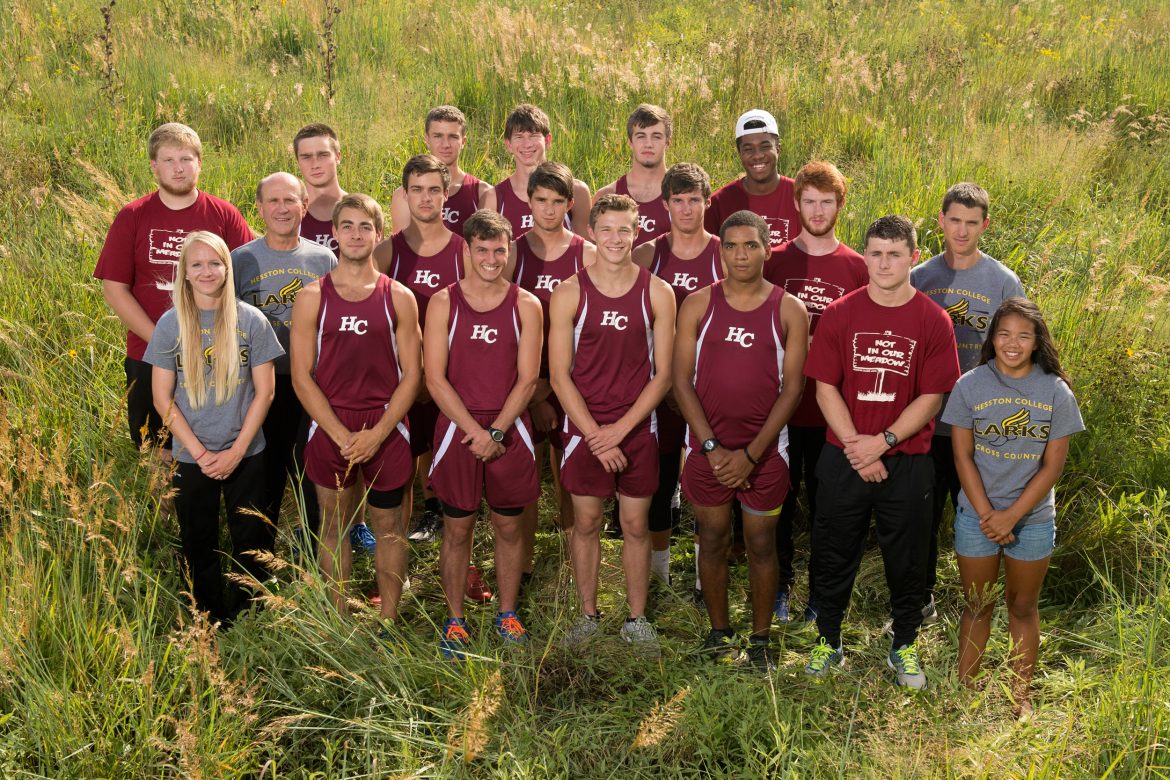 The Hesston College cross country team was recognized for earning a team academic award for the seventh straight year. The fall 2016 men’s cross country team is ranked first nationally in academic team standings with a 3.911 GPA, and the women’s team is ranked eighth with a 3.755 GPA. Rankings are based upon teams that nominate at least five members for Academic All-American honors. Not only does the accomplishment mean a lot to head coach Gerry Sieber ’64 and the team, but also to the Hesston College community. “Our athletic department and Hesston College community are proud of this accomplishment by the cross country team and Coach Sieber,” said Athletic Director, Rob Ramseyer. “They exemplify what we hope for and expect of our athletic teams through their positive impact in their sport and in our community.”

Under the leadership of coach Dustin Galyon ’04, the men’s basketball team finished the 2016-17 season with a record of 10-19. Battling in a tough Region VI, the Larks knocked off region opponent Fort Scott and played tight games with other region teams. The Larks will bid farewell to seven sophomores and plan to return six freshman to next year’s roster.

After returning one sophomore to the 2016-17 roster, first-year women’s basketball coach Jeff Jacobs finished his first season as a Lark with a 8-20 record. The young team will return several sophomores with plenty of playing time under their belts as well as add a full recruiting class as they look to improve on their record.

Prior to the start of the 2017 campaign, Lark baseball standout, sophomore Jonathan Law ’17 (El Paso, Texas) was named one of the top 150 MLB Junior College prospects in the U.S. by Perfect Game USA. Law, ranked at 146, an outfielder and right-hand pitcher, is a transfer to Hesston’s program.

The newest sport to Hesston athletics, the men’s golf team debuted with a seven-event schedule in early February. Prior to the season, coach Chris Frantz commented, “The potential is there. We have a lot of talent.” Several different golfers have led the team from meet to meet, leading to a well balanced team that is competing well.

Under the leadership of eighth-year coach Andrew Sharp ’99, the softball team has been competing well and maintains a winning record as of this writing. “I’m very excited about this group,” said Sharp. “We have good depth and talent all around the field.” The Larks’ schedule features eight games against teams ranked in the preseason top 15 NJCAA poll. The team also competed in California during spring break, bringing home a 3-1 record.

After two consecutive appearances in the national tournament, Lark Tennis, under the leadership of first-year coach Chance Joost, carries a spirited mood and has set the bar high as they attempt a third year at nationals. “The expectation is for us to continue to grow and develop into a nationally prominent program,” said Joost. The Larks carry eight on this season’s roster – six freshmen and two sophomores.