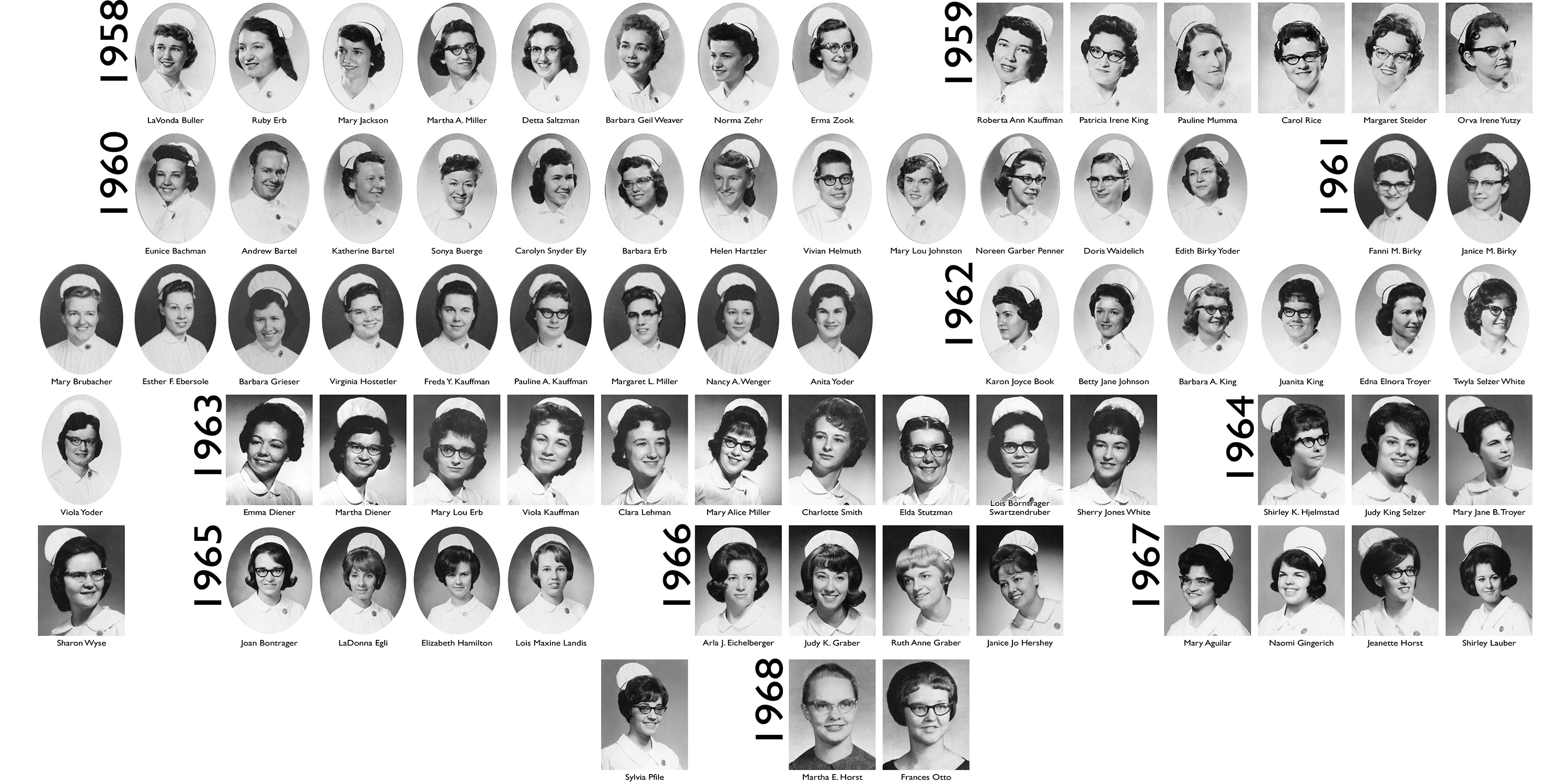 For 60 years, a decade’s worth of Hesston College nurses have been missing from the class records displayed in the nursing center. But soon the 73 nurses who did pre-nursing classes at Hesston College before finishing their nursing degrees at Kansas City (Mo.) General Hospital (KCGH) School of Nursing will be present among their fellow nursing alumni.

Thanks to efforts spearheaded by Detta Saltzman Ac55, ’56, who was among the first eight Hesston College graduates to earn a nursing degree from KCGH in 1958, a photo panel will be added to the display of the 51 classes to complete a Hesston College nursing degree since the associates degree program was launched on campus in 1966. The panel will be unveiled with a time of special recognition for the KCGH graduates during Homecoming 2018 in September.

“The first time we came back to campus after graduation, it was kind of a letdown that there was nothing recognizing us as graduates or of our accomplishment of finishing nursing school,” said Saltzman. “We were disappointed because we felt so much a part of Hesston College, but didn’t say anything because behind it all was the idea of ‘See a need and respond in love without the need for acknowledgement.’ Now, it’s exciting to see it all coming together and to be recognized with other Hesston College nursing graduates.”

According to John Sharp’s 2009 history of Hesston College, A School on the Prairie, nurses training started at Hesston in 1945 as administrators saw nursing as an “excellent opportunity for service” and were “interested in enhancing the status of the nursing profession.”

“The curriculum was built in cooperation with two Mennonite hospitals and nursing schools – Mennonite Hospital and School of Nursing in La Junta, Colo., and Bethel Deaconess Hospital and School of Nursing in Newton, Kan.,” wrote Sharp. Hesston offered one- and two-year pre-nursing programs on campus before nursing students would continue their education at either of the nursing schools or at Goshen (Ind.) College.

Due to low patient census in the mid-1950s, the La Junta school was closed, and Hesston nursing students needed a new option. Denver, Colo., and Hutchinson, Wichita, Kansas City and Winfield, Kan., were all considered.

“After graduation in 1956, the nursing students who would be moving on to a new location were called together for a meeting, and they told us they were sending us to Kansas City instead of La Junta as we had been planning,” recalled Stutzman. “They thought that location would provide us with the best preparation as we would be able to see and experience more there, and they were right. We were glad of that choice.”

Saltzman recalled that after just six weeks of classes, students were on the floor, learning while helping to treat patients. She noted that heart catheterizations were fairly new practice at the time, and a polio epidemic meant the students treated many patients in iron lungs.

Eleven classes of Hesston College nursing students would go through the KCGH program before Hesston launched its on-campus associates degree program. Those students have always been acknowledged as alumni because of the year or two of pre-nursing classes they completed at Hesston. Now they will finally be acknowledged for their nursing accomplishments as well.

Alumni who completed their nursing training at Kansas City General Hospital School of Nursing from 1956-68 are especially invited to attend the unveiling of the historical composite photo panel in their honor at 10 a.m., Saturday, Sept. 29, as part of the college’s Homecoming Weekend celebration.