The (re)start that fits 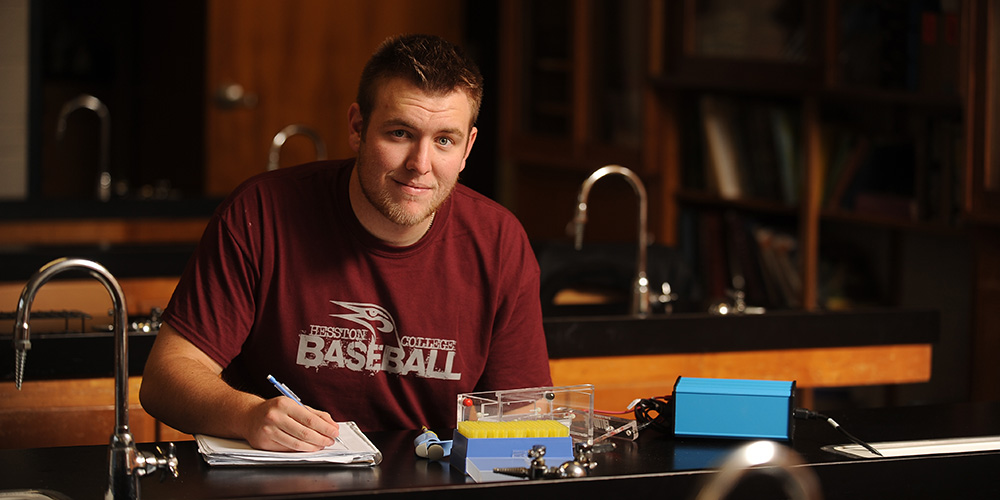 After disappointments with his college expectations, sophomore Dustin King discovered the start he was looking for all along.

This was not the path Dustin King ’14 (Wichita, Kan.) envisioned following high school graduation. Having enrolled at a four-year Kansas private school, the ambitious right-handed pitcher envisioned immediate success as a student athlete.

In the spring of his freshman year, however, King was surprised and disappointed to learn that he would be redshirted. Having hoped to compete for immediate innings, he found himself lacking for motivation and second-guessing his decision. The significant financial cost of attendance weighed heavily, too.

“When Dustin called me during a disappointing freshman year, I thought Hesston College might be a good fit,” said Holman, who started working with King when he was 12.

That conversation helped set Dustin on a life-altering path that has allowed him to be an impact player on a competitive collegiate team while gaining leadership and academic opportunities that are allowing him to pursue his dream of becoming an optometrist.

Familiar with Holman and his shared interest in developing the whole person as a student athlete, Hesston College coach Rob Ramseyer was immediately interested in having King join his squad.

With Ramseyer in pursuit, King was initially leery of the cost to attend another private college. He says his campus visit shed light not only on a great opportunity to immediately compete for innings, but to do so affordably. Within weeks of the visit, he was in.

Since signing with the Larks, King has been challenged both on and off the mound.
“The coaches have helped me become a better person,” King said. “As players, we’re pushed to do well in the classroom, and I’ve had opportunities to take on leadership roles within the team that have spilled over to the campus.”

A key part of last year’s pitching staff that led the Larks to a school record-tying 26 wins, King led the team in wins and innings pitched. With another big year, King may position himself at the top of several career pitching records at Hesston.

King’s growth has not been limited to the baseball diamond. Late in his freshman year, he was selected as a resident assistant and student ambassador. A peek at his academic workload reveals a true student athlete. This year alone, his course load includes Microbiology, Religions of the World, Physics I and II, Macroeconomics and Organic Chemistry.

In his final semester, King is job shadowing at Mid Kansas Eyecare in Hesston to get a glimpse into his future career.

“Dustin has certainly made the most of his opportunity at Hesston,” Holman said. “His hard work and good attitude are reflected in his accomplishments there. Despite some adversity and disappointment throughout his career, he refused to give up on himself or his dream.”