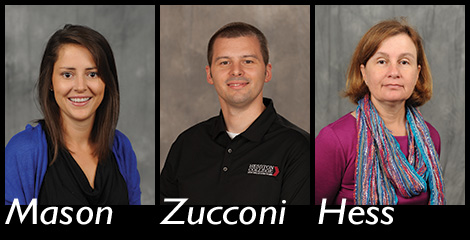 The Advancement department, consisting of Development, Alumni and Church Relations and Marketing and Communications welcomed new team members over the last few months.

Lindsey Mason is a development officer for Indiana, Michigan and northwest Ohio, and also focuses on planned giving. She holds a bachelor’s degree from Goshen (Ind.) College, and previously served at Hesston as a resident director from 2011 to 2014.

Mike Zucconi started as director of Development during the summer. He meets with alumni and donors in south central and eastern Kansas as well as eastern states and manages the daily Development happenings. He holds a bachelor’s degree in communication and history from Eastern Mennonite University (Harrisonburg, Va.) and a master’s of education degree in sports administration from Wichita (Kan.) State University.

Beth Hess began as director of Marketing and Communications in September. She holds a bachelor’s of science in design degree from the University of Cincinnati (Ohio) and worked as a graphic designer and communications professional for many years throughout several departments at UC.

Several new faculty and staff appointments were publicized in the Summer 2015 issue of the Hesston College Today. The following individuals were welcomed to the community after production of that issue had already commenced.