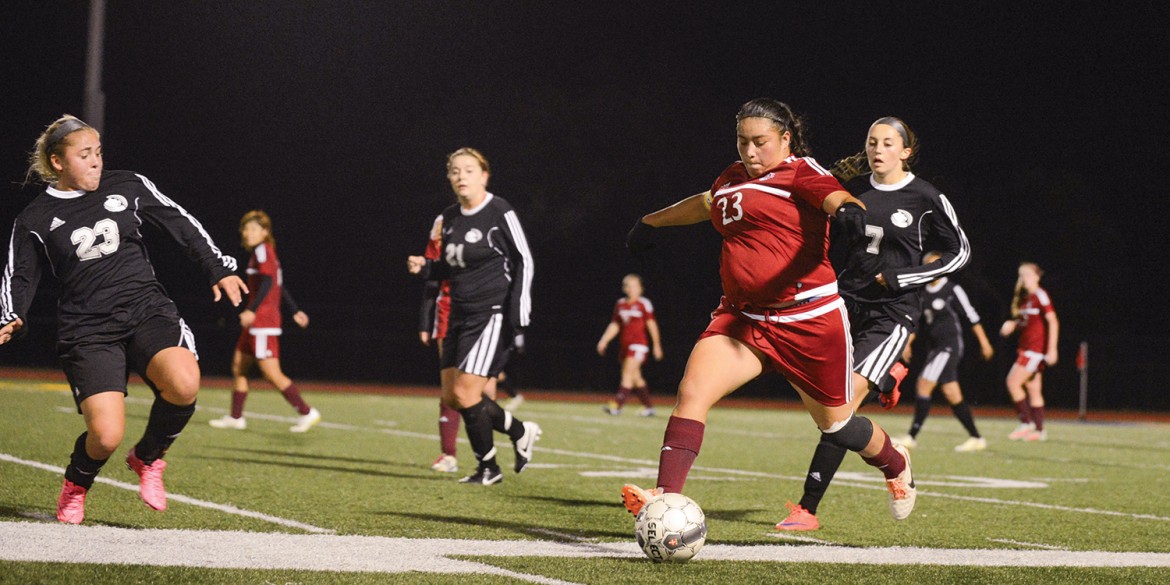 Enneliese Alcantar drives the ball up the left sideline in the playoff game vs. Butler County.

It was a record-breaking season filled with numerous individual feats. The Larks shattered individual and team records of the nine-year-old program.

There were several instances of players becoming something they were not for the betterment of the team, – a defender making a move to the offensive side of the field, a field player making the transition to keeper – and the net effect was a team whose players were willing to lose their previous soccer identity in order to gain what any competitive team wants most: a successful season.

Reviewing results from a preseason Myers Briggs personality test he’d given his players, fifth-year head coach Bryan Kehr was taken aback at what seemed to be a roster imbedded with an inordinate amount of raw leadership skills. Kehr was excited. Perhaps the Larks were in for a special season, he thought.

The momentum started with a 2-0 blanking of Region VI foe Cowley College on Aug. 22. As the season reached its midpoint, several team and individual marks had fallen.

Midfielder Mika Matsuda ’17, Kyoto, Japan, surpassed the career assist record with her 13th helper in a win over Northwest Kansas Tech on Sept. 15, and finished the season among the nation’s leaders in that category. Five days later, a win over Goshen (Ind.) College JV gave the program 39 season goals, eclipsing the record 37 goals scored by Kehr’s 2012 team.

On the receiving end of several of Matsuda’s assists was forward Mikaela Zook ’16, Millersburg, Ind., a converted defender, who flourished in her new role. Zook’s prodigious scoring, including a pair of four-goal matches, put her into the Hesston annals as the all-time single-season scoring leader with 23, and the career leader with 28.

On the defensive end, new-to-the-net goal keeper Jaymee Bowers ’16, Goshen, Ind., used her athleticism and willingness to learn to help power the Larks’ defense, setting a career record for shutouts (8) along the way.

The team chemistry is perhaps best encapsulated by defender Enneliese Alcantar ’16, Garden City, Kan., known affectionately to her teammates as “Chief.” Alcantar epitomizes a selfless team-first mentality. Her passion for the game and motivation to play for her teammates helped push the program to new heights.

“Anyone who knows our team knows you can’t talk about our success without mentioning Chief,” Kehr said. “We’ve had a ton of positive leaders who have been willing to step up in a variety of roles and it’s been gratifying to watch our kids buy in and compete for each other.”

“Several of the sophomores made it clear at the beginning of the season that this team would be united and we would play for each other,” said Meredith Spicher, a converted high school field hockey player whose school didn’t offer girls’ soccer. “It’s been awesome to celebrate each other’s successes, which was one of the underlying goals Chief and the other leaders put in place at the beginning.”

The team reached a milestone on Oct. 11, with its 9-0 drubbing of Southwestern Adventist University (Keene, Texas), earning the program’s 10th win of the season, breaking the standing record for season wins. The team finished the season 15-6, falling to eventual district champion Butler Community College (El Dorado, Kan.) in a playoff match.

Regardless of wins and milestones reached, the team achieved so much, and the players received an education on how a community can come together to do great things. They played with passion, they fielded a competitive roster, they supported each other, they embraced the concept of team play and they learned valuable life lessons as the season progressed.

“For a coach at a small Christian school, the developing stories within the season are what it’s all about,” Kehr said. “This is what we hope for at the start of any new season. I expect our kids will always remember the impact they had on each other in 2015.”