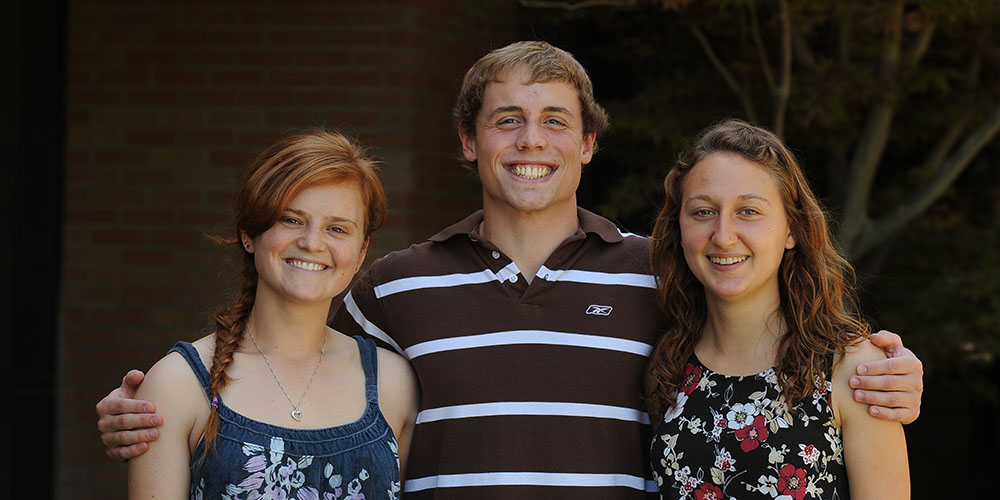 The new award, which recognizes excellence on the field, in the classroom, in the dorms and campus community, was created by a desire from the athletic department to acknowledge the outstanding men and women who represent Hesston College through athletics. Each year, an outstanding male and female student athlete will receive the award.

Hesston coaches nominate one of their players for the award, and votes from the entire department determine the winners. Rittenhouse and Wagner-Davis tied for Female Athlete of the Year.

“Athletics play a pivotal role at Hesston College,” said Athletic Director Joel Kauffman ’80. “We’re proud of what our student athletes contribute to our college, both in the athletic venue and around our campus and community. Pierre, Krista and Emily are excellent examples of the type of athletes we look for at Hesston College.”

Each of the recipients excelled in their respective sport and was a leader on their team as well as an example of a successful student athlete.

Zook, a team captain, led the NJCAA nationally in three-pointers with 127, setting a career mark at Hesston after only one season. He averaged more than 20 points per game and will lead a strong returning class for the Larks in 2012-13.

“Pierre continues to grow and be challenged while challenging others,” said coach Dustin Galyon ’04. “He pursues his life with integrity and is a terrific leader, and I’m excited to see what he can do next year.”

Rittenhouse capped off an outstanding career by representing the Larks at the NJCAA National Cross Country Championship Race in Hobbs, N.M., in November, finishing 47th out of 268 runners with a time of 20:53.57. A team captain, Rittenhouse was a 2011-12 Academic All-American.

“It has been a pleasure to coach Krista the last two years,” said coach Gerry Sieber ’64. “She brought an infectious enthusiasm for running and training, which was a real gift for our team. Krista is a kind, caring, servant leader.”

Wagner-Davis, an Academic All-American, ranks second in all-time hits at Hesston College and sixth in career runs batted in. She started every game of her career with the Larks and served as team captain in 2011-12.

“Emily represents everything I look for in a Hesston College softball player,” said coach Andrew Sharp ’99. “She’s a team leader, a tremendous competitor and has a heart for serving others.”