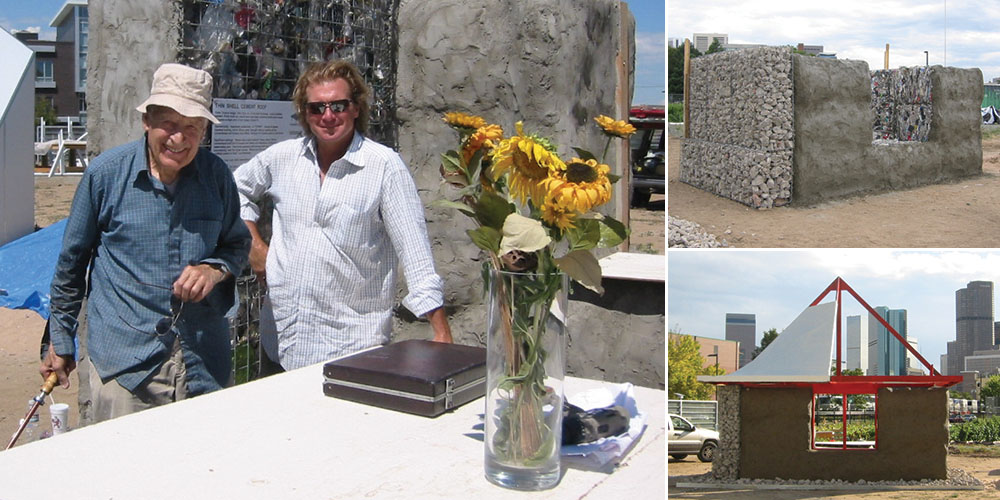 An alumnus finds uses for trash in construction.

Doug Eichelberger ’76 of Larkspur, Colo., views his time at Hesston College primarily as one of self-discovery. Those who know him might also see it as one of bending the rules.

“When you’re young and finding your way, rules are something you fight against,” said Doug.

Now an architect, Doug is in the business of designing and building, but he still stretches the traditionally accepted rules a little. Sure, he does a lot of his work the traditional way with things like wood frames, insulation materials, brick and stone. But sometimes, for something different and the good of the planet, he builds with trash.

The inspiration for Doug’s alternative building methods was sparked about 20 years ago when his business, Eichelberger Architects, was in downtown Denver near a recycling yard.

“I saw these bales of paper and plastic stacked about 18 feet high and began wondering if they could be used as building materials,” said Doug.

He tested his idea with a structure in the recycling company’s yard. The test building’s success led to three more – “The Trash Barn,” which is a shop on his ranch, and two houses, similar in scale to the shop, for another environmental steward.

The buildings start with a foundation of large bales of plastic, each weighing about 900 pounds. Subsequent rows can be made from baled paper or plastic. The bales are then covered with stucco, and the building has what Doug calls “an organic feeling – there are no straight lines and it has movement similar to a rock.”

“For all the reasons you hate plastic on the side of the road, it’s ideal for building,” said Doug. “It is impervious to moisture and has a half-life of next to forever.”

Even as recycling practices have improved to include more products, trash buildings have their place, he says.

“Right now, the obvious place for buildings like this is in developing countries,” said Doug. “Plastic is everywhere, and many places don’t have ways to dispose of it. We could clean up the planet and house people all at the same time.”

He has even thought through the problem of needing machinery to lift the heavy bales and has begun experimenting with gabion walls – wire baskets used for erosion control. The baskets can be wired together and filled with rock, masonry rubble or plastic.

It’s now clear that his struggle with rules as a young man and the self-discovery that came from it would be essential for Doug’s life work.

“Hesston was a place that allowed me to express myself and find myself without judgement,” said Doug.

His innovative ideas could someday have a world-wide impact. He has been contacted by a group from Belgium to do work in the west African country of Guinea, and has sent his ideas to Mennonite Central Committee.

“We are here on earth and connected to everyone and everything, so we don’t have the right to waste,” he said. “It is up to us to minimize consumption and get out and help people who have less than us.”