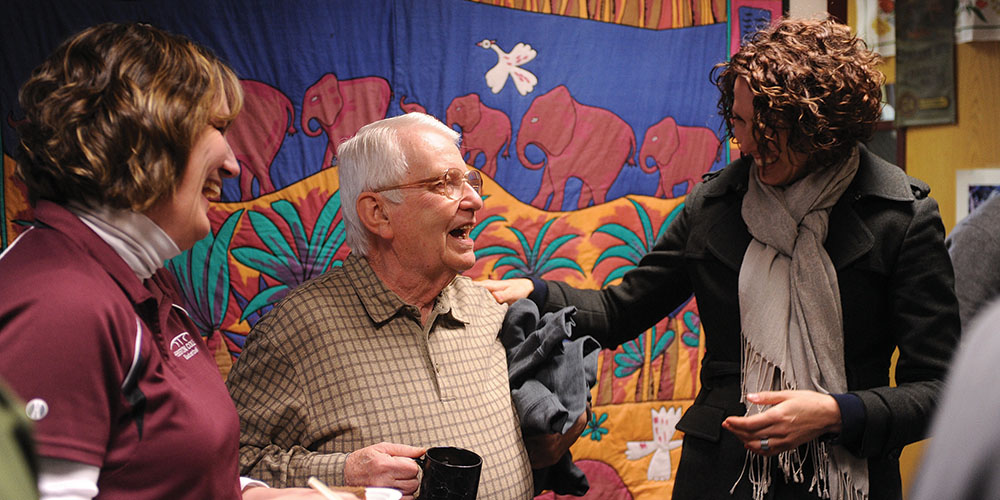 Longtime Hesston College employee Bill Mason retired following the fall 2011 semester. Mason served at Hesston for 28 of the last 41 years in roles including public relations, student services, admissions and as a business instructor. His background, professionalism and knowledge of the business world made him a valuable resource to the campus and his students. In 2010, the endowed Bill Mason Business Scholarship was established to award four selected business students each year with a $2,500 scholarship for their sophomore year at Hesston College. Mason was honored with a retirement celebration on campus Feb. 16.

The Aviation Department hosted the ninth annual Aviation as Mission event March 23 and 24. The weekend activities featured Hesston College Aviation graduates who shared their experiences in the aviation field and how they have incorporated faith into their occupation. Spouses of the alumni were on hand to offer a view from another perspective. The guest speakers for the weekend were Dave ’71 and Sue (Eicher) ’73 Roth (Milford, Neb.), Matt ’06 and Chelsey Yoder (Bristol, Ind.), Roger ’79 and Rhonda (Nussbaum) ’79 Yoder (Goshen, Ind.) and Amy (Bachman) ’99, aviation faculty member and Derrick Birdsell (Hesston, Kan.).

Hesston College hosted more than 70 grandparents of 42 students during Grandparent Days March 29 to 30. Grandparents traveled from five states to spend time with their grandchildren and learn more about Hesston College. Sessions over the two days had the theme “The Many Faces of Diversity.” Presenters ranged from students to faculty and staff to community members and explored the diversity of students’ backgrounds, religious beliefs, learning styles, hometowns and countries.

Hesston College students partnered with Ethiopia Reads to package and ship books to create libraries at schools in the African country. The college’s African Student Union arranged for the campus community to package more than 20,000 books that had been collected by a Houston, Texas, Starbucks. Members of the African Student Union also helped serve at a baked potato bar fundraiser at the Hesston Area Senior Center where they raised about $1,000 to help ship the packaged books to Ethiopia.

The annual International Festival was March 22 with the theme “A Parade of Nations,” which focused on the flags of the students’ countries and an Olympic athlete from each country in preparation for the summer 2012 Olympics in London. The Festival is an opportunity for international students to share their cultures with the rest of campus with food from the students’ countries and a program of traditional songs and dances. Hesston College was home to 36 international students from 13 countries during the 2011-12 academic year.

Vice President of Advancement Yvonne Sieber announced the appointment of two new development officers to the campus community. Scott Sundberg will work from his home in Lancaster, Pa., with alumni and friends on the east coast and internationally. He began in his role April 9. Derek Yoder ’96 will work with constituents on the west coast and in parts of Kansas beginning July 1.