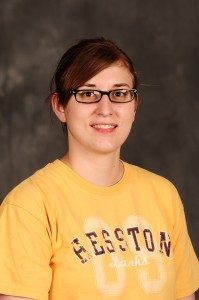 Do you want to know a secret? I don’t want to leave Hesston College. When I first started in 2009, I didn’t want to stay. I went from one extreme to the other and it was an exciting, yet sometimes anxiety-filled two years.

Hesston overwhelmed me again and again with mentors, friends, doughnuts and mod life. I tried to keep a semblance of order by going to bed at a decent time, which only earned me the nickname “Grandma,” as my idea of “decent” was no later than 11 p.m.

Other than the early bed time, I was a typical college student. I changed my major several times, I ate junk food and I watched movies rather than studying.

More than that, I was challenged and encouraged by the people with whom I came in contact.

Karen LeVan was instrumental in helping me improve my writing skills. General Astronomy with Jim Yoder gave me an appreciation and respect for the role science plays in my life. Human Thought and Belief with Joel Kauffman allowed me to broaden my horizons and express my viewpoints without fear of ridicule.

Kevin Wilder was my advisor and someone I could talk to over coffee or breakfast about life, E. Bio assignments and how much fun Music Appreciation was.

Rosie Jantz encouraged me to do my best in everything. She became one of my favorite listening ears and gave great advice, even when I didn’t want to hear it. I could count on her to have a piece of chocolate and a hug just when I needed it most.

My sophomore year roommate and I are polar opposites. I don’t say much, she talks a lot. I grew up in the church, she had no idea what a Mennonite was. She has two siblings, I have 10. In spite of our differences, she showed me what it means to be accepting and still have your own ideas.

I am thankful that I was able to spend my first two years at Hesston. It has given me the chance to become more aware of the diversity that surrounds me, to become a more critical thinker and to grow in my faith.