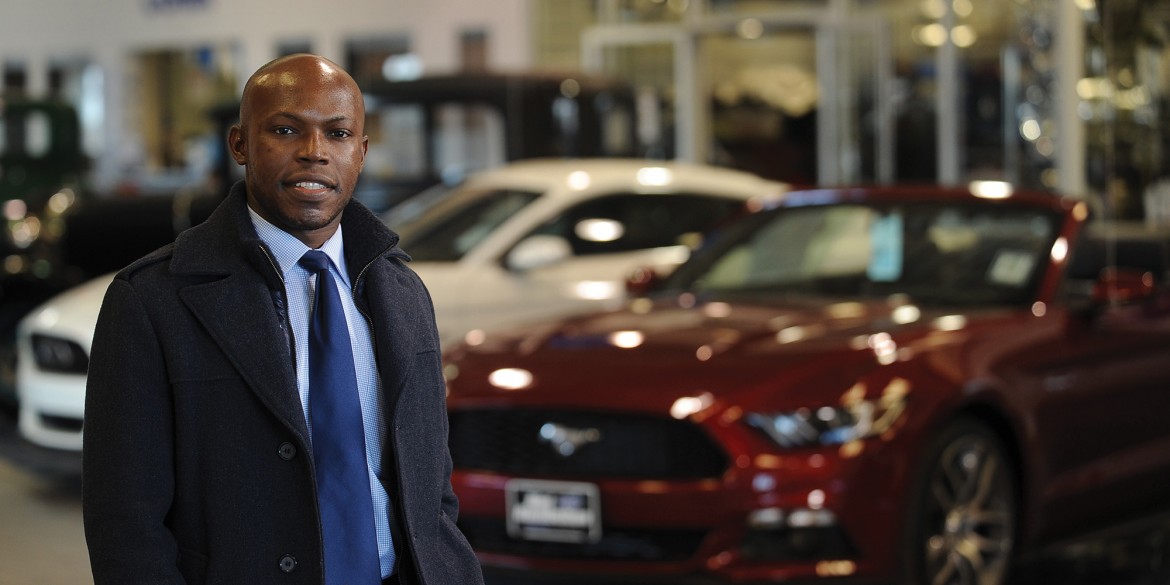 A “Welcome to Kansas!” ice storm didn’t deter Obi Mbawuike ’06 from embracing his new home upon his arrival from Nigeria and 85-degree temperatures in January 2005.

Mbawuike enjoys a challenge. It’s why he took between 18 and 21 hours each semester at Hesston so he could finish in three semesters. At the same time, he worked a couple of campus jobs and tutored for several classes – not to mention the adjustment to the language, culture and new environment as an international student. It’s also why he enjoys the challenge of working as a sales consultant at Mel Hambelton Ford in Wichita.

“To be successful in any business, you must have a great attitude and work ethic and be willing to take care of people,” said Mbawuike.
Mbawuike says he was nurtured through his transition to college life by Hesston College faculty and staff who cared and were willing to help in whatever ways he needed. He notes relationships with college employees – especially with inspiring faculty like Hugo Boschmann and Bruce Bradshaw, his work study supervisors Sue Stuckey in Food Service and Naomi Unruh in Campus Facilities and his mod parents Clark ’82 and Deb (Swartzendruber) ’83 Roth – as influential in his early college career.

Admittedly, rural Kansas was not Mbawuike’s ideal choice of a new place to start. He was more drawn to big cities, but family ties and recommendations to Hesston gave him a start here.

After a whirlwind year and a half, Mbawuike traveled down the road to Bethel College (North Newton, Kan.) where he earned a B.A. in business. He then continued a little further south, securing a master’s degree in public administration with an emphasis in public finance from Wichita State University.

Before securing his M.P.A, Mbawuike landed a job working in the finance office for the City of Bel Aire (Kan.). A short time later, he was offered a job selling cars with Eddy’s Toyota of Wichita and later with Mel Hambelton, where he acheived Level 3 – the highest possible level – in Ford Motor Company’s 2012 Employee Excellence Program, placing him among the nation’s best in sales and customer satisfaction.

Within five years, Mbawuike’s career has spanned two very different segments of the business world from government to sales. Fortunately, Mbawuike was able to navigate the cultural landscape of doing business in the U.S. while working toward his degrees, and he says he’s grateful for the varied experience.

“Working as a car salesman is a lot of fun for me,” Mbawuike said. “The hours are flexible, and it’s a laid-back atmosphere. My coworkers tell me I’m relentless, but it also requires a balance of reading the customer and knowing just how far I can push.”

As his career continues to play out, Mbawuike is open to whatever professional opportunities may come his way, including a return to finance or the chance to someday launch his own business.

“One thing I’ve learned is the good Lord is going to lead me wherever He chooses,” said Mbawuike. “With all of my experiences combined, I know I have the education, skills, information and training to do whatever that may be.”