A lesson in persistance 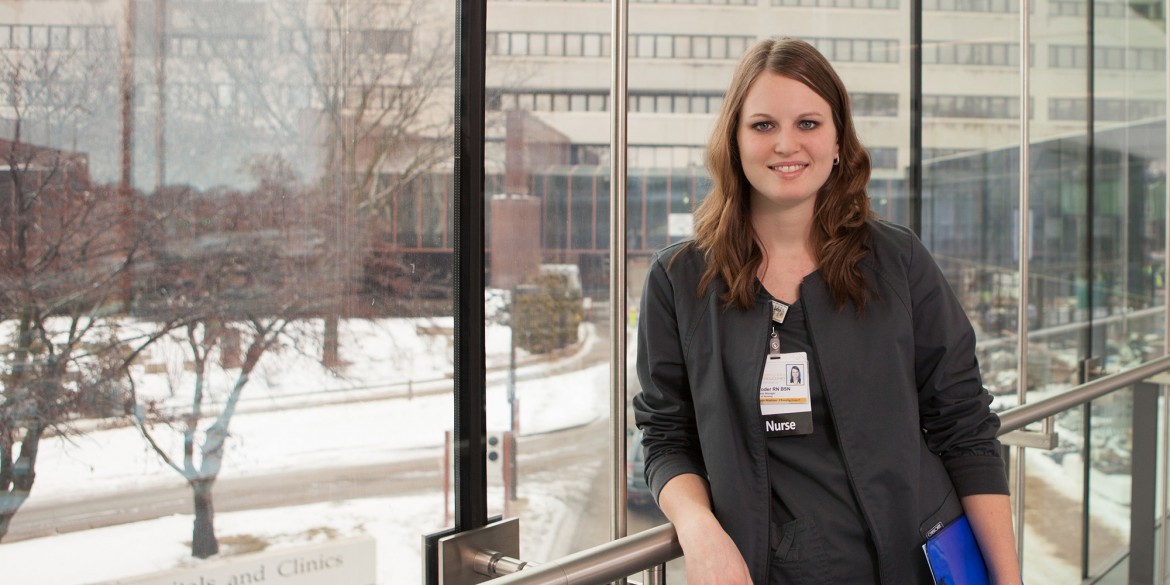 Most new nurses understand the journey to gaining roles of greater responsibility and begin with working in entry level positions.
For Kara (Ropp) ’12 Yoder, determination, confidence in her abilities and a never-give-up attitude expedited her climb up the leadership ladder.

The 23-year-old nurse is two and a half years into her career. Yoder almost gave up on her dream of becoming a nurse after her first semester in Hesston College’s Nursing program. Now she’s one of the youngest assistant nurse managers in the history of the University of Iowa Hospitals and Clinics (Iowa City) – a 711-bed public teaching hospital and level one trauma center.

In June 2012, with a freshly minted registered nurse license, Yoder began her career like every other new nurse – working in a typical RN position in an orthopedic unit. Two months later, while continuing to work, she entered Kaplan University’s RN-to-BSN online program, graduating in February 2014. In the meantime, she switched jobs and moved to internal medicine at the University Hospital. In September 2014, she began an online leadership in management master’s program through Walden University (Minneapolis, Minn.) The next month, she landed her current role, where her responsibilities include managing about 120 nurses and dealing in staffing, scheduling, orientation, budgeting, leadership rounding and day-to-day unit activities.

“I wasn’t expecting to be in this position this early on, but the reason I am goes back to Hesston – it was a great foundation for me and gave me a confidence boost,” said Yoder.

Yoder is proud of the work she has done to reach such a prominent role at such a young age, but says none of it has been without its challenges.

Her first semester at Hesston was a struggle as she tried to adjust to the demanding course work and standards.

“It was a snowball effect,” Yoder said. “I was overwhelmed with classes and started second guessing everything. I planned to quit the program at the end of the semester and go to business school.”

Intervention from her instructors changed everything.

“I give a lot of credit to my instructors for helping me make it this far,” Yoder said. “When they heard I wanted to quit, Becky Bartell sat down with me and made a list of all possible routes I could go in the nursing field. Bonnie [(Kauffman) Ac65, ’67 Sowers] also let me know that she thought I had great potential as a nurse. Having that kind of encouragement, feedback and mentorship was what saved me.”

As she stepped into her new leadership role, the confidence she gained at Hesston helped Yoder navigate the sometimes rocky waters.

“My transition into the assistant nurse manager role wasn’t easy, and I work through new challenges every day,” she said. “I became the person to have difficult conversations with patients and staff and hold people accountable for their actions. For some nurses, it was hard to take orders from someone so much younger.”

Yoder has faced plenty of ups and downs, but compliments on a well-run unit and positive feedback from staff affirm her sense that she is where she needs to be.

“I want new nurses to know to stick with it even when it’s hard,” said Yoder. “Look where it got me. I look forward to the future – there is so much potential.”