Moving On: Kevin Wilder Takes on a New Challenge 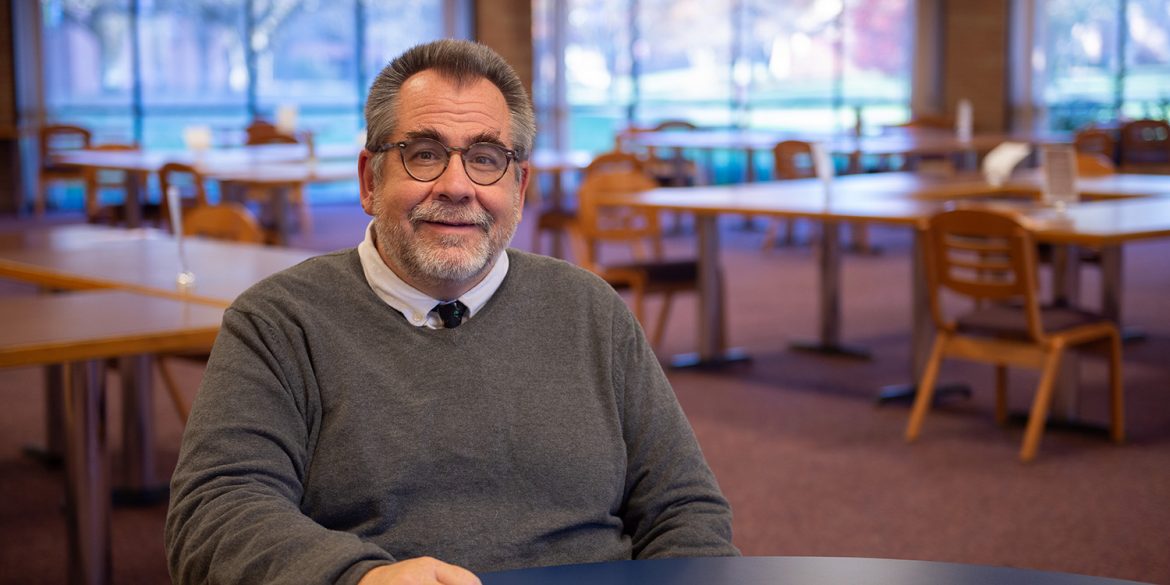 It’s been a dozen years since Kevin Wilder moved from behind the pulpit as Hesston College’s campus pastor and into the classroom, teaching in the social sciences and Bible and ministry departments. It’s unusual for him to stay in any one role for this long. He’s a restless soul with a hungry mind, and it’s well past time for him to hop on his bike and see what’s over the next hill.

Wilder grew up in Marion, a city located in the industrial heart of Indiana. His father was a self-made man, working his way up in a glass factory, eventually becoming an industrial engineer. Much of his family worked hourly jobs in the automotive plants nearby. From them Wilder learned his work ethic: “You should be the first to work and the last to leave.”

He was also taught to be a pragmatic, direct communicator. “In my house you didn’t use a lot of words,” Wilder recalls. “You spoke directly.”

Wilder’s first encounter with Hesston College came when he and his wife Marilyn were attending Valparaiso Mennonite Church in Indiana. Wilder was in seminary in Chicago at the time, and was offered a youth pastor position at Grace Community Church in Newton, Kan. When he told his fellow church-goers about his new job, several of them responded by saying, “You’re going to be really close to my alma mater: Hesston College!”

Wilder was new to the Mennonite Church at the time, and wasn’t familiar with places like Hesston. As he and his young family prepared to move to Kansas, he tucked the name away in the back of his mind.
A few Hesston College staff and faculty attended Grace Community Church, and through them Wilder’s familiarity with the campus grew. But it wasn’t until Bible professor Marion Bontrager ’57 invited him to sit on a committee tasked with establishing a youth ministry program at Hesston that Wilder experienced extended contact with the college.

At that point, Wilder had been involved in youth ministry at Grace for about seven years. He has many talents, but staying still is not one of them. The itch to move on to something new began in him, and he felt an affinity with the college. So when the position of campus pastor at Hesston came open, he jumped at the opportunity.

Wilder’s approach to pastoring his campus flock included inspiring curiosity and a kind of radical vulnerability. He made himself available to whatever was coming, and encouraged students to do the same. He brought the same approach to teaching, modeling a version of resilience that finds its strength in community rather than individuality. “If you define resilience as the ability to stand alone, then I don’t think I’m resilient at all,” Wilder says. “But if your definition of resilience means standing with others, then I think I’m very resilient.”

Wilder learned resilience in a community context as a kid. “I have a learning disability, so I’ve always had to rely on other people to proofread my work,” he recalls. “But in return I have always tried to figure out what I can contribute to the team, and do that the best I can. When I played basketball I knew I could set picks and play defense and hustle for the ball, so I got to play because I figured out how I can contribute.”

On his office wall hangs a poster that reads: “Life is like riding a bicycle—in order to keep the balance you must keep moving.” Wilder tries to impart that lesson to his students. “Just keep showing up,” he tells them. “Be as durable and as bright as you can be.”

He’s tried to pass down a similar message to his children. “I told them: Wilders are durable and smart. You might not have the most talent on the team, but you’ll be there when you’re needed, and you’ll know what to do when your chance comes.”

Wilder lives the values he preaches. He puts himself where he’s needed, and when an opportunity arises, he’s prepared to step up. So when Whitestone Mennonite Church began its search for an interim pastor, he was there, ready and eager to get to work. Whitestone is the Wilder family’s home church, so it made sense for him to train for future interim pastoral positions in a place he knows well.

Wilder hopes this final decade of his professional life is filled with opportunities to take on traditional roles like the one at Whitestone. For faith-based organizations that need transitional leadership, he is ready to step in. It’s exactly the kind of work he’s been preparing for his whole life.

I remember exactly where I sat in Kevin Wilder’s Gen Psych classroom. It was far enough in the back of Kropf 150 that (hopefully) he wouldn’t hear me whispering to my friend Jason or, heaven forbid, call on me.

But the hopes of that introverted 19-year-old were dashed. As much as I wanted to fade into the background and just marinate in my introvertedness, Kevin drew me out. He asked about the band on my T-shirt. I found out he was a John Mellencamp fan. He told some eye-rolly dad jokes. He won me over. I ended up finding a lot of joy in that classroom.

You don’t have to spend more than a few minutes with Kevin to see how likable, kind and authentic he is, but it’s not until you’re in his classes that you see how that translates to learning. When I became Kevin’s colleague a few years after graduating from Hesston, I rushed to put my advisees in those classes. I wanted them to experience what I did: active, engaging class periods that inspire a deep curiosity and wonder about human behavior.

As Kevin’s friend and colleague, I had lots of opportunities to learn from him as a teacher, but some skills can’t be learned. One of Kevin’s most distinctive attributes is “WOO,” a term coined by the strengths-based personality tool Hesston uses in their First Year Experience program. “Winning Others Over” is hard for most of us to do, so here are a few ways you might emulate Kevin Wilder and practice WOO in your own context:

For every one of Kevin’s quirky, fun-loving WOO-based stunts, I could name ten more. Those little moments enlivened my time at Hesston and drew me out of my introverted corner of Kropf Center. But here’s what I’ve really learned from Kevin about what it takes to win others over: support people, but never by throwing others under the bus. Be patient, especially when it’s hard. Offer grace to those who, at first glance, might not deserve it. And always be on the lookout for joy.