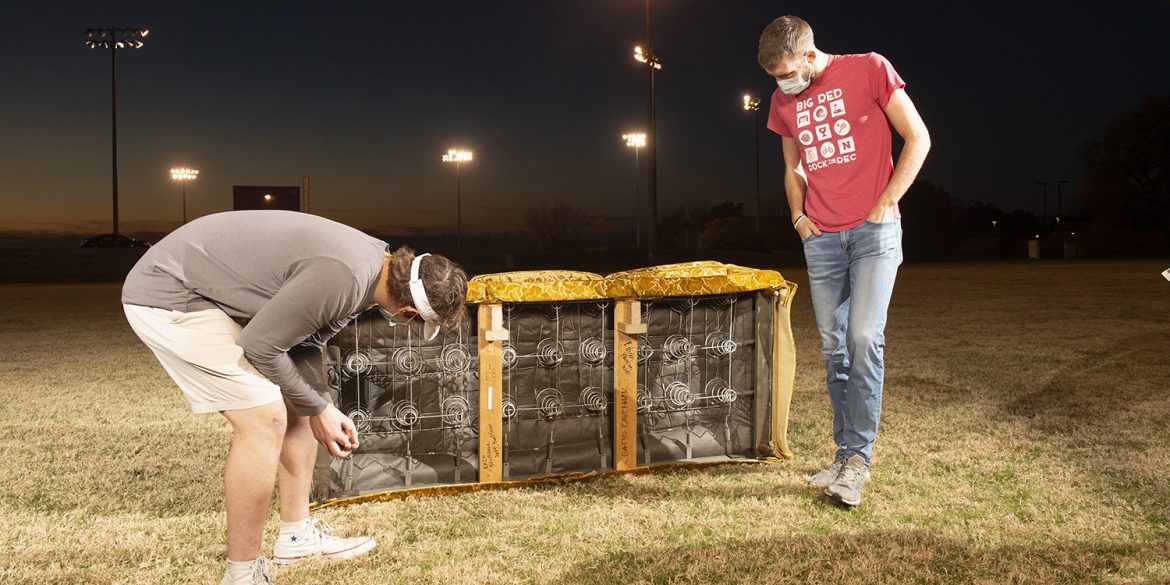 For nearly 30 years, Goldy the Couch has been a mainstay of student life at Hesston College. From the apartments of resident directors to the dorm rooms of students to the grassy sidelines of Sieber Field, Goldy has provided a comfortable, welcoming spot for Larks of all stripes to sit and fellowship.

As the COVID-19 pandemic raged across the globe, the ways in which Hesston has enacted its commitment to “Christ-centered community” have changed. And nowhere is that change more apparent than on the worn cushions of Goldy the Couch. On Oct. 7 of this year, the current stewards of Goldy were informed by Hesston College athletic staff that Goldy wasn’t welcome at that evening’s Hesston men’s soccer scrimmage, as social distancing guidelines had not been strictly observed on previous outings.

In order to understand this shift in fortune, Goldy’s former and current caretakers agreed to reflect on the life and times of this iconic piece of campus furniture.

Caretaker oral tradition places Goldy’s arrival at Hesston College around 1992. Early caretaker, HC resident director and noted sitting enthusiast Brent “Dogg” Brockmueller ’01 traces his first encounter with Goldy to 10 years later, during his post-college life when he lived with Blake Buhrman ’01. “I don’t know if [Buhrman] owned it in college, but when we were done with college we shared a house and he had the matching loveseat and couch,” Brockmueller recalled. From there, the Goldy and its sibling—a matching loveseat, now lost to time—moved into the Erb Hall RD’s apartment, joining four other couches in the space. “I actually didn’t own the couches until I moved into the dorm and Blake let me have them,” Brockmueller said, noting that he built lofts and risers to accommodate the furniture.

The chain of couch stewardship gets a hazy from there. Brockmueller sold Goldy to a Hesston College student, though he can’t recall precisely who. The couch bounced around until it came under the wing of Jeff Kauffman ’18, who bequeathed stewardship to Chris Lichti ’21 several years ago. Lichti, a senior aviation student, passed Goldy to Ethan Klassen ’21.

“The best memory I have of Goldy is when [Jacob] Mullins and I first brought it out to a soccer game at the beginning of the year,” Klassen said. “We could hear the commotion from people in the stands as we passed by them and set it down right in front. Not only did we get right up close to the action happening on the field, but we were also supremely comfortable.

“It was nice not to have to sit on the hard concrete bleachers to watch the game.”

Klassen, however, faced a dilemma when Goldy grew too large for his dorm room. He chose to pass Goldy to Jacob Mullins ’22. “Mullins was an obvious choice as the next owner of the couch,” Klassen said. “He embodied the spirit of Goldy like no other person.”

The Spirit of the Couch

But what is “the spirit of Goldy”?

Klassen, Lichti and Brockmueller’s answers share similar themes: Community. Fraternity. And whatever it is that drives 55 HC students to cram themselves into an RD’s apartment to participate in a screening of the Pixar movie “Up.”
The trouble, though, is that the spirit of Goldy—the camaraderie, the friendliness, the togetherness—runs counter to life during a pandemic. Physical proximity is dangerous. Students are discouraged from visiting each other’s rooms.

And, as HC athletic department COVID guidelines state, students are to sit six feet apart while attending outdoor sporting events, even though the couch can comfortably (albeit snugly) seat four.

Though Hesston is a dry campus, Goldy is permitted despite reports of the couch’s almost intoxicating effect on those who rest upon it.

“I have countless memories of people coming over to watch movies or just hang out and we would all pile on to Goldy,” Lichti said. “I’ve watched tons of Netflix, taken many great naps, and had great conversations with lifelong friends on Goldy. I always made it a goal to have one of the classiest rooms on campus so I could host all the hangouts; naturally, Goldy played a big part in that.

“Having a comfy couch is the basis of any good dorm room.”

“I remember [Lichti] granting me the great privilege of being able to have a seat on it,” Klassen said. “Despite its age, I remember how comfortable my body felt in its cushions that day.

“I was hooked from that point on.”

Perhaps it was a combination of youthful exuberance and the couch’s siren song that led to a moment of unsound judgment, which forced the hand of HC athletic department officials. And so it was that Goldy wasn’t welcome at the next Lark soccer scrimmage.

“Because of the close proximity of people to each other when sitting, Goldy does not provide a COVID-safe environment with a couchful of people,” he said. “It was best to heed the college’s regulations regarding social distancing.”

With the distribution of COVID vaccines underway, the days when Goldy is welcome back on the Sieber Field sidelines edge ever closer. Until then, the couch resides safely in a Kauffman Court dorm room, awaiting the day Larks can alight on it once again.