How can we keep from performing? 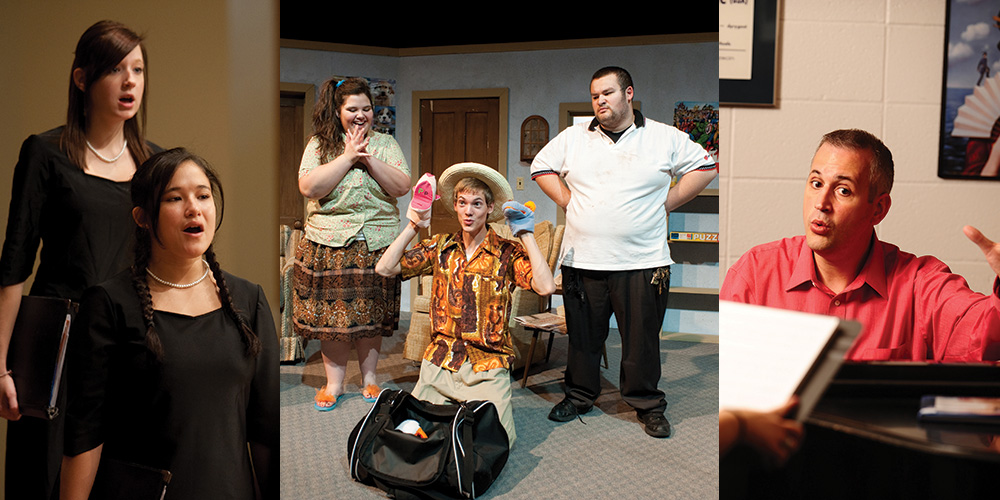 “My life flows on in endless song…”

The Hesston College community lifted its voice to the familiar hymn in a Sept. 19 chapel as voice instructor Matt Schloneger ’92 recounted the rich tradition of a cappella singing at Hesston College.

“…how can I keep from singing?” the song ponders.

Like Mickey Mouse at Disney World and cheese fries at Newell’s truck stop, some things are a mainstay to a place. Though parts of it have been both embraced and viewed with hesitation, the performing arts have an esteemed position and expansive history at Hesston College.

Even when the college was merely ideas on paper, music was integral to its identity. In 1907, the Executive Committee compiled nine points outlining the college’s “scope and purpose.” Fourth on the list: “that vocal music be a special feature of the school.” During the college’s first year in 1909-10, music, along with academics and Bible, was one of three departments.

“Traditionally for Mennonites, music is a way to experience community,” said Schloneger. “Unlike liturgical faith traditions, Mennonites don’t have sacraments that bring us to a place of worship, but the act of singing together has become like a sacrament. It’s the way we worship together.”

For the college’s first 40 years, vocal music was the sum total of performing arts offerings.

Church leaders believed instrumental accompaniment might detract from the lyrics. Even the oratorios performed annually beginning in 1912, though written to include instruments, were performed completely a capella.

Mennonites gained opportunities for broader cultural influence and developed an appreciation for aesthetic values as social programs like Civilian Public Service were developed during the World War II era. This led to more acceptance of a wordless worship experience where instruments were used to enhance vocal music.

In 1949, music instructor John P. Duerksen convinced administrators to purchase a 1909 Steinway grand piano, and vocal music with accompaniment was introduced. Rather than squelch the college’s rich music tradition, the Steinway nurtured a new generation of performers.

In 1971, the music department found a permanent home with construction of Northlawn. A year later, theatre became a part of the Hesston Experience when the Little Theater was built in the basement.

Theatre suffered similar roadblocks to instrumental music until the mid-1960s.

“From a theological standpoint, theatre was not ‘real,’” said Schloneger. “Pretending to be someone else was not appropriate for a Christian.”

Yet with the support of key administrators and faculty members, theatre crept onto campus in the spring of 1966 with the advent of an acting class taught by Arlo Kasper. The class continued for one semester every year, plus a drama production each semester. In 1972, the college hired full-time theatre instructor Robert Hostetter.

“Some people in the local community were ambivalent about theatre and may not have understood its crucial role in developing empathy and embodying cross-cultural dialogue,” said Hostetter.

Now, 40 years later, the community has embraced that idea.

“Theatre can make people think profoundly about their own choices and become aware of the realities of the world we live in,” said Deni Brummer ’13 of Hutchinson, Kan.

Though performing arts have come a long way from the founders’ original dreams, they are now recognized as a uniting factor for the community and important to the Hesston Experience.

“At Hesston, the performing arts are easy to get involved with,” said Brummer. “You don’t have to be the star to be involved, and you create lasting bonds with the people with whom you work.”

Even traditions like oratorios and a capella singing started in the college’s earliest days live on through the Thanksgiving masterworks concert – now performed with a live orchestra – and hymn sings in chapel service and weekly student-led Monday night hymn sings.

“The opportunities with performing arts at Hesston are exceptional,” said Cameron Ponce ’13 of Elkhart, Ind. “I love the support I feel from this community when I perform.”

Schloneger, Matthew. “The A Capella Oratorio: An Investigation of Interactions Between Ethos and Fine Art in Choral Singing Among Old Mennonites at Hesston College (1912-1949).” International Journal of Research in Choral Singing. September 2012

Sharp, John. A School on the Prairie, A Centennial History of Hesston College 1909-2009: Cascadia Publishing House, 2009