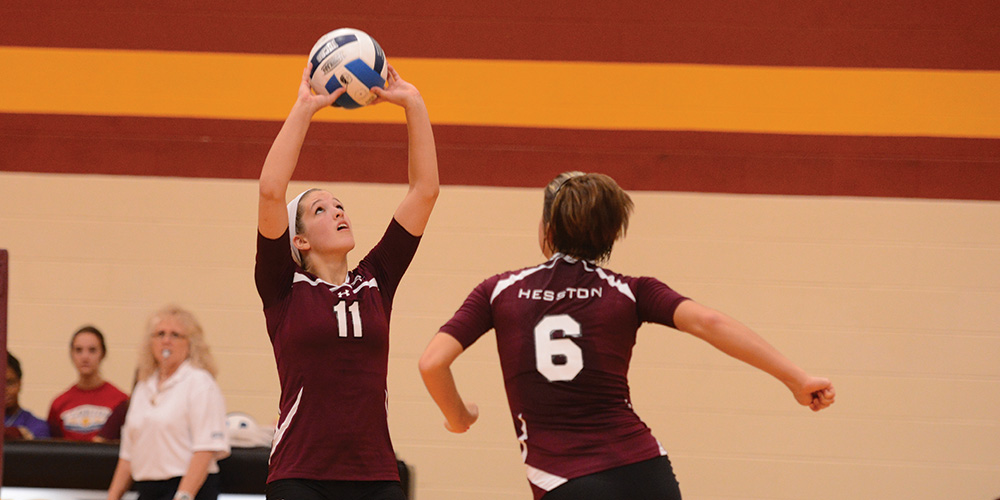 All describe Hesston College volleyball coach Jessica Cleveland’s first year on the job during the 2011 season. Cleveland ’06 and her players had their work cut out for them, but Hesston Volleyball hung tough, and building blocks for future success were firmly put in place.

A year later, Cleveland’s work and persistence are yielding positive on-court results for the Larks. Less than a month into the new season, Hesston surpassed last year’s win total and set its sights on the postseason – a goal that seemed out of reach a year ago.

With a full freshman recruiting class to complement her returning players, Cleveland is optimistic she has the talent to improve upon last year’s 10th place Region VI finish and lead the Larks to the postseason for the first time since 2007. Knowing that the incoming class of eight made up two-thirds of the roster, Cleveland had to find out what she had with her newcomers.

“I was excited about our early season tournaments and the first part of our region schedule,” Cleveland said. “It was difficult, but I knew it would be a good test and give the freshman an understanding of our competition. They’ve acclimated very well.”

A key moment came the first weekend of September, when Hesston traveled to El Reno, Okla., to compete in Redlands Community College’s tournament. Several injuries meant Hesston traveled with a thin roster. Cleveland’s insistence on players’ versatility was about to be put to the test. Two days later the Larks returned home sporting a 4-1 weekend record and a tournament title. Cleveland sensed that her young squad was ready to compete for a post-season bid in the competitive Region VI.

“We fought hard in the Redlands tourney,” Cleveland said. “It was a great measuring stick for our team, especially playing short-handed.”

With their first three region games coming against ranked teams, Hesston endured a brutal stretch to begin the season, but the Larks weathered the storm. If Cleveland has a healthy roster at her disposal, the Larks have a good chance of placing in the top eight of a difficult 12-team region to qualify for the post-season.

Maggie Lasaster, Bentonville, Ark., a freshman setter majoring in business, said team chemistry has been a key to this year’s success.

“Even in the recruiting process Coach Cleveland stressed that she wanted well-rounded volleyball players,” Lasater said. “Because of that, we have a special group that is mentally, physically and spiritually strong. When we’ve had injuries, others have stepped up. The support we draw from each other has been huge.”

The seeds of a close-knit roster were sewn as soon as the players arrived on campus. The first activity Cleveland orchestrated, even before players moved into the dorms, was to spend time together at an off-campus retreat center. It gave players a chance to bond with each other and set the stage for close connections.

Whether the Larks earn a seat at the playoff table will be answered in large part by Cleveland’s freshman class. One thing is for sure – these players can depend on one another to get the job done.

“We compete for each other and we want to get better,” Lasater said. “We’re here to win, and we have the team to do it.”