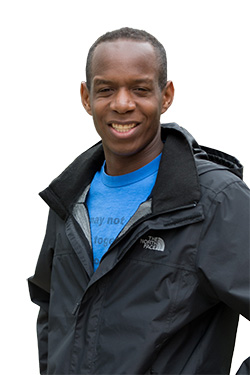 Curtis Denlinger spent four years at Hesston College before bachelor’s degrees at the college existed. Aviation was part of the draw to Hesston for Denlinger, but as an ambitious and driven personality, Denlinger’s goals stretched even further than the skies.

“I came to Hesston as an aviation student, but I studied business for my first two years and then started flying the third year. Like any kid, I always thought airplanes were cool, and that was really what piqued my interest in aviation.

“At the same time, I was surrounded by highly motivated and inspiring business people. My dad owns and operates a saw mill. As I grew up I was able to work with and observe him. My church also had a mentorship program, and my mentor also owned two or three businesses and had a handful of rental properties. I was intrigued by all that went into owning and operating a business and was inspired to do that as well.

“As a junior in high school, I started my own landscaping business and had that for three years. At Hesston, I started doing vehicle detailing. I already had a handful of campus jobs, but wanted to make a little extra money as well. So while I was home for Christmas break my freshman year, I learned detailing more in depth from a guy at church. When I got back to Hesston, I promoted my service and would detail a car every Saturday.”

“I completed my flight training in 2014 and instructed for Hesston for eight months. After that I flew pipeline patrol based out of South Dakota for six months. In August 2015, I was hired by Republic Airways, a regional airline that is a subcontractor for a lot of the major airlines. I’ve been a captain for a year. I fly an Embraer 175 – a two-engine jet that holds 76 passengers.

“When I started flying, I was living in Wichita and flying out of Pittsburgh, Pa. After six months, I started flying out of Philadelphia, which is near where I grew up and where my family is, and moved back to Pennsylvania. In January 2017, I started Clean Fleet, a vehicle detailing and fleet washing business. I have five guys that work for me part-time. We have some customers who are national companies, as well as other more local companies.

“With Republic, I fly day trips to as long as five days. I usually try to do flights that are four or five days and then I’m home for a bit.”

A plan for the future

“I enjoy being busy and managing activity. As captain, I keep track of plane maintenance before we fly and keep track of the crew. I’m in charge of the decision making in that setting, and I enjoy that responsibility.

“With Clean Fleet, I didn’t create it just for another job for myself. I mostly wanted the business experience and the learning experience – managing people and customers and marketing. Flying will never be something I give up, but having this experience gives me options for whatever life may hold later on.”