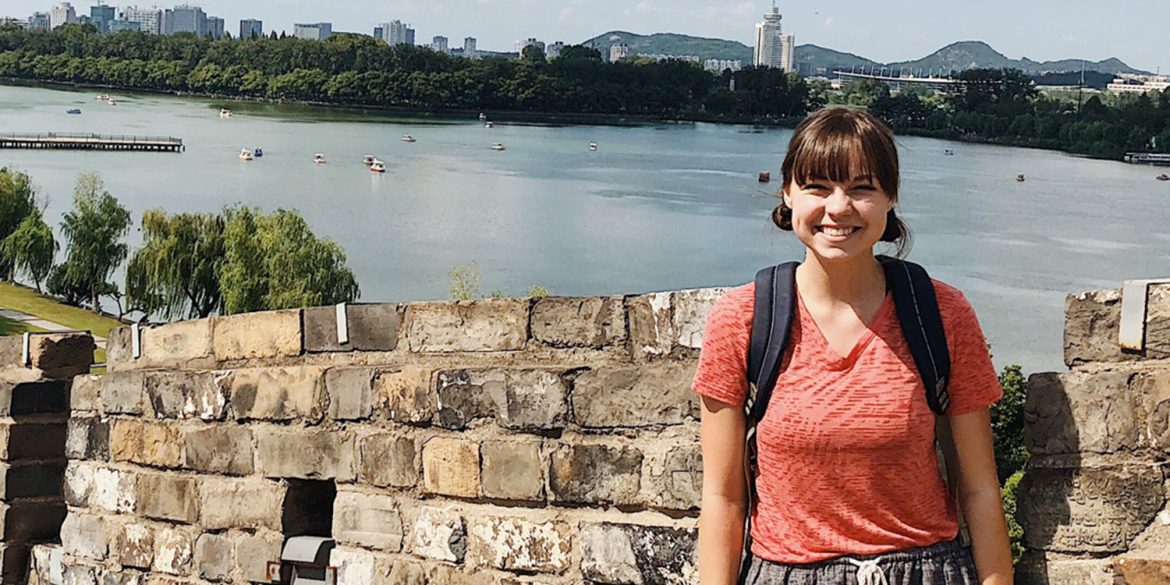 A reflection by Mackenzie Miller ’18

My Hesston Experience did not end with graduation. It was extended to a year in China as part of the Hesston College Global Experience pilot program. When I said “yes” to China, I wasn’t sure what my experience would hold, but I knew that my years at Hesston College had prepared me.

For it was during my years at Hesston College that I found a grounded identity for myself.

When I started at Hesston, I was full of questions. Questions about my faith, about the right career path for an undecided major; questions that seemed to be hidden deep inside me just longing for the space and opportunity to be voiced.

And it was at Hesston where I found space, among friends, professors and community members, to wrestle with these questions, while also nurturing a curiosity that would drive my going forward.

Hesston and China were critical times of letting go of the need for answers and following the next thing that made me curious. Choosing curiosity over fear.

But I would not have been brave enough to choose this path had I not been surrounded by a community such as Hesston.

From the first day on campus, I had teachers and faculty speaking to gifts they saw in me, teaching me that who I was already was a person overflowing with gifts, they may just need some fine-tuning. I found this approach refreshing.

As I learned to be who I was, my passion for our world and language learning continued to surface. I decided to pay attention to that. I joined the Hesston Horizon newspaper staff and began to attend weekly tutoring sessions with my Chinese friend, Jane, building on my Chinese language skills and forming a friendship that still exists today. While my knowledge expanded, so too did my identity take shape. Yet, it was no longer found in the things I did or accomplished, but rather how I chose to live. Focusing on relationship, focusing on curiosity.

Identity formation alongside academic growth was the biggest gift that Hesston College gave me, and is the reason I will consider my time there as two of the most meaningful years of my life. I learned how to ask hard questions and converse with others about our differences. I learned to be curious, allowing that curiosity to stretch far beyond my newly-declared communication major.

At Hesston College, that meant engaging with the diversity of people and stories, sitting around a campfire with fellow students at Campus Worship, simply being together, traveling and singing with Bel Canto Singers and making room for others to change me.

These lessons I began to learn at Hesston College only continued to surface during my year in China.

I will always be grateful for my two years at Hesston College. For the ways in which the community nurtured my questions. I am thankful for teachers who incorporated values of peace-building and intentional living into their courses, for opportunities that allowed me to explore my strengths and weaknesses, and for a college vision that looked beyond these two years and tended to the deeper parts of my being as a person.

I chose to start at Hesston College, and after helping me to establish my values and find my identity as a Christian, a communicator and a peacemaker, they sent me off, encouraging me to use these learnings on the journey ahead.

The first stop was China, but there will be many more along the way. Each will call on my learnings from Hesston to tend to the present. And when curiosity leads to new places, Hesston College has given me the tools and confidence I need to follow.