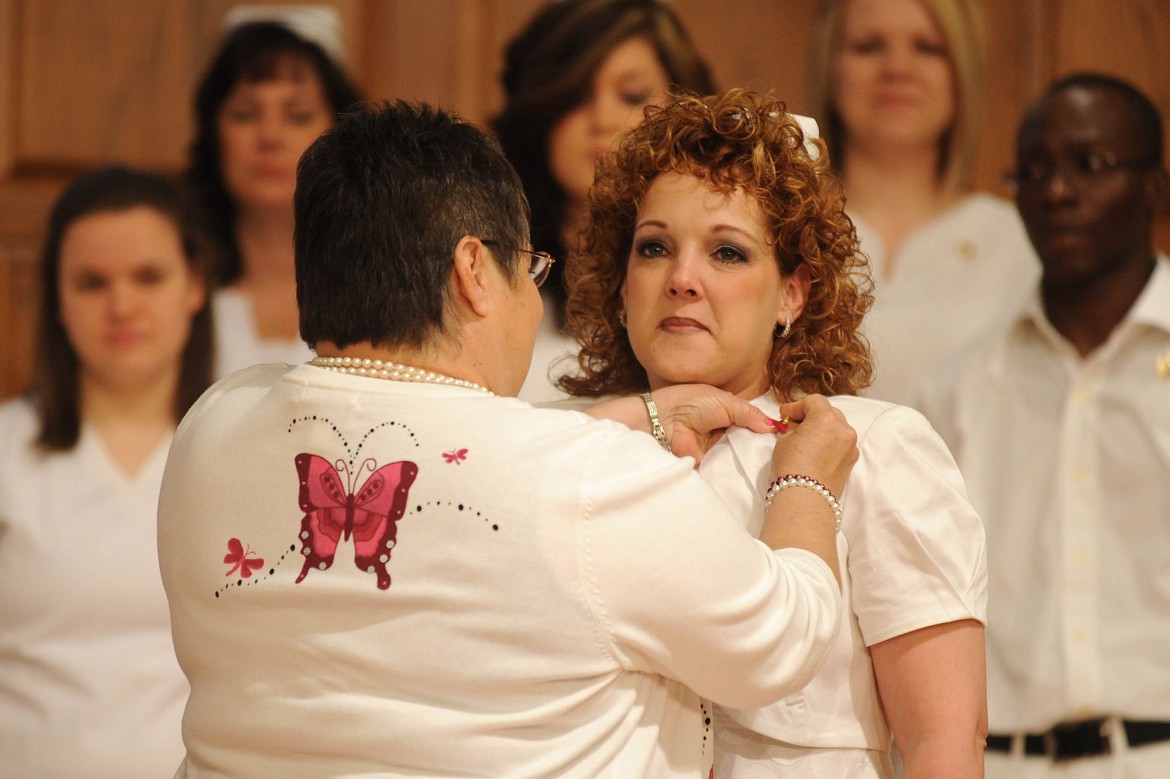 by Lisa Harrelson as told to Carol Duerksen

Everybody who graduated from the Hesston College Nursing Program in 2009 has a story, but Lisa Harrelson…Lisa has a story that must be told. Lisa has a story that testifies to the courage of a young woman with a learning disability, the mystery of God’s perfect timing, and the willingness of a nursing program to go the second and third mile with a student.

This story is told in Lisa’s own words.

God placed the desire in my heart to be a nurse at a really young age, but I didn’t know how I could ever be a nurse, given the obstacles I had to overcome just to get into a school. I only had a 7th grade education, and this was a deep wound in my life. My parents took me out of school because I struggled so much. I was seen as not paying attention, or lazy. I failed first grade because I had great difficulty reading and writing. No one had an idea why I was struggling. I thought I was mentally challenged, and I remember telling my mother that over and over. No one knew I had a learning disability.

When I was 18, I got my GED. I remember the day I went to go get my mail and pulled the envelope out and it said “pass.” I slumped down at the mail box and wept. I decided that day I would never share my painful education hole with anyone. I was going to try and get to college to be a nurse. I took some general education courses through colleges in Wichita. I inquired into three different nursing programs and was turned down. I didn’t have an SAT or an ACT test score. My learning disability was a problem. My 7th grade education was a problem. I had no algebra, no chemistry, no biology, no computer. I was missing four years of high school and these schools didn’t want to take that gamble on me.

I kept praying about this, because I knew God was calling and I just knew if he called, he would open up the right doors. I was working at Wesley Medical Center and had the opportunity to work with Hesston students in clinical, and there are also some Hesston grads who work there. I asked everyone what they thought of the school they went to, and Hesston was the only school that everyone I asked said how awesome their education was. I kept hearing about the teachers and how supportive they were. Many people said, “Lisa, you would love Hesston because they will go the extra mile to help students learn.”

I needed to hear that. At Hesston, I would be more than a number—my teachers would know my name and things about me that would help me overcome my education obstacles. I worried about finances and how much Hesston would cost. People told me there are many grants and things that Hesston offers, and kept encouraging me to check it out. Hesston is 45-50 minutes from where I live, and that was a long way. But God kept opening doors.

I will never forget my first campus visit to Hesston. Everyone, as they walked by, said hi. I felt like I was at home the minute I set foot on the campus. There’s a man who keeps the grounds—I don’t know his name—but every time I would see him he would smile or wave. The students are full of life and no matter how old you are, you fit in. I could go on and on about every area of the campus and the people who work in those areas and the differences they made in my life.

And the teachers…I can’t say enough about the teachers. You can do anything with the right support around you. There are many gifted teachers in this world, but there are few who will pick you up when you feel you can’t go on. This is not a job for them—it’s a true ministry. I can’t tell you how much healing I have received in this program. They helped me realize my true potential, not the messages I had told myself my whole life.

The day I graduated from Hesston was amazing, but I still had to pass boards to really be a nurse. As I sat down to test, I knew that no matter what happened I was going to keep coming back until I made it! Mid way through the test I could feel a little panic set in and I cried out to God, “Please help me now—I need wisdom!”

It’s kind of complicated to explain how the test is set up, but I can tell you that when I was done, I knew that I’d either done extremely well or really badly because I answered the minimum number of questions a candidate can answer – 75. I feared the worst. I told my family that there is nothing within me that thinks I passed. I waited a day and a half, and when I got the results, I cried the hardest I ever have cried. I didn’t believe it and I kept having my husband check the spelling of my name on the licensure information. I was in disbelief until the next day when it came in writing: Lisa Harrelson has passed. I am now an R.N. I am still in shock. It feels like a dream.

Lisa Harrelson prays that God will put people in her path to whom she can minister. Apparently, God honors those prayers.

Gary Voth, Hesston, Kansas, was in his third week at Wesley Hospital in Wichita due to a pulmonary embolism (blood clot near the lungs). One medication that was supposed to help had left him in excruciating pain for sixteen hours, with damaged nerves, and unable to walk. The doctors recommended Gary begin another medication, the blood thinner Coumadin. That night, worried and uncertain about the future, neither Gary nor his wife Gladys could sleep in the hospital room.

Around 2 a.m., Lisa Harrelson entered the room. It was a busy night and they were short-staffed, but Lisa was determined that her patients wouldn’t know that. As a nurse assistant, she took Gary’s vitals, and as she did, she could see fear on the faces of the couple in the darkened room. She began to talk with the Voths about Gary’s medical situation.

“I shared about my husband having a similar medical scare several years ago,” Lisa recalled. “I talked about the fear I experienced with my husband having to be on medication for life and living with the fear that he may get another blood clot. Then, after awhile, I was afraid that maybe I shared too much. I really want to focus on my patients and not what I have gone through, but in that moment I just wanted to offer them some kind of hope.”

“Lisa’s calm reassurance of God’s nearness and guidance, plus the practical ups and downs of living with Coumadin, were the right prescription of nursing care,” Gladys said, her voice breaking. “God’s timing was perfect. Even a year later, we still recall her confidence and reassurance that any medication has its uncertainness, but God is constant.”

Lisa and the Voths credit God with her placement in Gary’s room that night. At the time, she was working in a “floating pool.” Each night, when she arrived at work, she would go wherever the need was the greatest. She worked in 16 different departments. That night, she was where she needed to be.

Just as she was this past Easter Sunday morning. Near the end of the service, one of the band members, John Jayne, noticed what seemed to be the sound of someone snoring nearby, then Mary Shook asking her husband if he was okay. Buddy Shook’s head had dropped down and he was having difficulty breathing. A paramedic from the congregation was at his side quickly, and soon other medical professionals from the congregation came to pick him up and lay him on the floor.

“I wasn’t fearful as I jumped up from my seat to help,” Lisa recalled. I was thinking that someone had passed out because we had 900 people there and it was a little hot. As soon as I got to Buddy, it was clear that he had lost his blood pressure. His face was gray. We scooped him up and I started CPR. I recall the incredible feeling of hearing hundreds of people all around us praying for Buddy.

“I think about so many times at Hesston College I was told ‘you are the equipment.’ The teachers wanted us to know that we were not to rely only on monitors and machines but on God and ourselves as well. ‘Treat the patient, not the machines,’ they would say. That day I had no machines—I just had God and my training. I could have done everything possible and Buddy’s outcome could have been different. Buddy didn’t die—he came back to life. Now, every Sunday Buddy comes up to me and hugs me and thanks me. If I never have another opportunity to make a difference in someone’s life, that Sunday was worth all the blood, sweat and tears of school.

“I have heard so many stories of how that Sunday changed so many in that audience. People made new commitments to God. One young lady made a decision to become a paramedic—she said that God had been calling her to do if for a long time and she was ready to answer the call. It changed all of us. Buddy had some sore ribs and that is taking some time to heal, but he tells me it’s a beautiful reminder of resurrection Sunday!”

John remembers a story Lisa told him a few years ago, when her husband was laid off from work and Lisa wanted to go to nursing school but didn’t have the money. “Someone in our church walked up to her and handed her a check for the exact amount she needed for her class, and told her that God said to give this money to Lisa! And a few years later, there we were, watching Lisa jump into action, being able to save Buddy’s life with the training she received because of the generosity and obedience of another. Wow! I am totally in awe of our Lord!”