More than a president 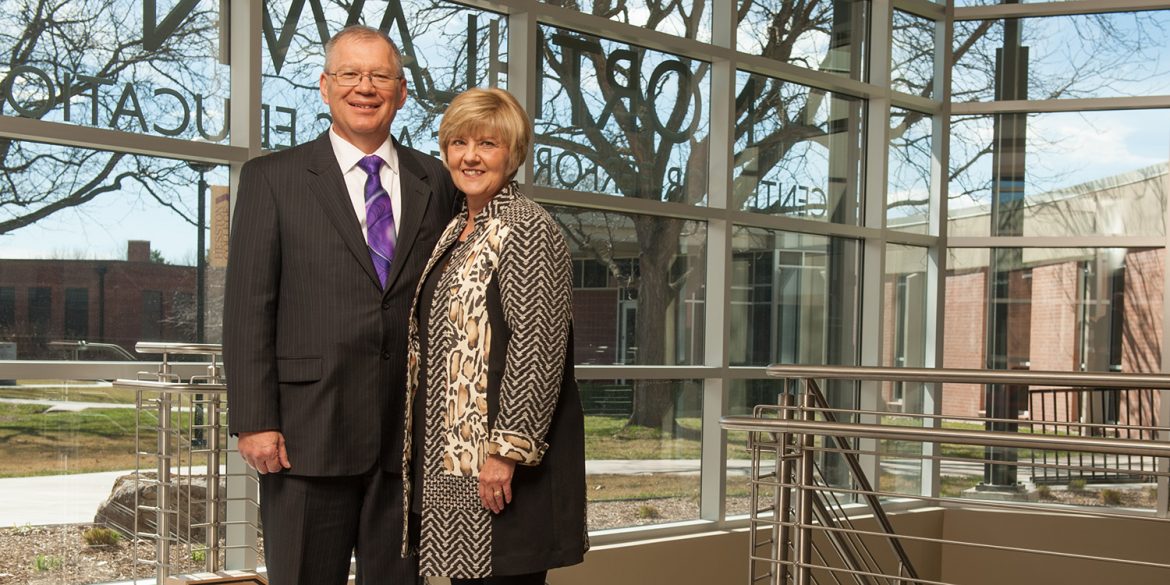 President Howard and Tami (Birky) ’72 Keim in the newly renovated Northlawn Center for Performing Arts Education. Howard notes that much of Tami’s work as president’s wife was behind the scenes—hosting guests in their home, attending events, occasionally traveling with Howard and always being his biggest supporter. Tami has been director of Hesston’s Early Childhood Education program since 1987, and will continue in that role.

Perhaps it was foreshadowing when sophomore Howard Keim was appointed Hesston College student body president for the 1971-72 year. Maybe, looking back, it was the start of preparations for another Hesston College presidential appointment more than 30 years later.

The 20-year-old Keim thought his time as president ended with his graduation in 1972. Even as he advanced his career as a pastor and as a faculty member and administrator in higher education, college president was not part of his career plan.

“I enjoyed teaching and working with faculty, but I had trouble seeing myself as a college president,” said Keim.

Then he was shoulder-tapped to consider becoming Hesston’s eighth president. He turned to mentors and colleagues to help process the possibility, and it was through those conversations and words of encouragement that he recognized the call to be president of not just any college, but Hesston College.

And Keim has not been a run-of-the-mill president who sits in his office making decisions and shaking hands. He’s been in the cafeteria eating lunch with students, sharing about Hesston with prospective students and their families, on the road meeting with alumni and donors, in the pulpit at churches across the country, in meetings with faculty and staff to determine how best to improve academics and the overall student experience. He even took opportunities with his love for theatre, performing monologues at campus events and appearing in the narrator role of Stage Manager in the fall 2014 production of Thornton Wilder’s Our Town.

“Hesston students do really good work and I am most proud of them.”
– President Howard Keim –

“Whenever I see Howard walking on campus, he always takes the time to say hello,” said Zac Headings ’16 (Hutchinson, Kan.). “Whether it be a quick greeting in passing or a longer conversation about events on campus, he’s always friendly and shows he cares.”

Always, Keim has made the work of the college about the people of the college and its stakeholders, fulfilling the commission set forth by John Paul Lederach ’75 at his October 2005 inauguration to “Be vulnerable, be love and be humble.”

As the first president to be both a Hesston graduate and former faculty member (Keim was director of the Pastoral Ministries program from 1987-96), it may be that he understands in a unique way the importance of relationships and collaboration within the college community.

“Hesston students do really good work and I am most proud of them,” said Keim. “They are campus leaders. They are strong performers. They support one another. And it’s all a product of our faculty and staff who encourage and nurture their gifts and abilities. Anything I can do to support them – make decisions and raise funds – is valuable to me.”

“I have always viewed myself as a steward, not an owner of the office of president, and it has been my goal to ensure students are well-served and the mission of the college was advanced and strengthened for the future,” Keim said following the announcement of his transition plans in October 2015.

When evaluating the college’s progress under his leadership, it is clear that desire has been well-fulfilled through teamwork. Over the last 11 years, thanks to the hard work of dedicated faculty and staff and the encouragement and trust of the administration, Hesston has made strides in many areas that affect the student experience.

In the academic realm, important changes were made to the general education curriculum and course transferability, as well as adding high-demand programs of study and extracurricular activities to meet student needs and workforce demands.

Likewise, the college began measuring, evaluating and improving course standards, academic challenge and faculty instruction as seen in Hesston’s outstanding results from the Community College Survey of Student Engagement (CCSSE) and Individual Development and Education Assessment (IDEA) survey. In 2010, Hesston College was ranked the number 2 two-year college in the country by Washington Monthly magazine based on 2009 CCSSE data and showed markedly improved scores on the survey in 2012. Student satisfaction rates continue to climb as faculty respond to feedback in student learning.

On the business end, the college regained financial stability and increased the endowment. According to Board of Directors Chair Kelvin Friesen ’73, under Keim’s leadership, Hesston has always been in the upper zone on the Financial Responsibility Index as evaluated by the Federal Department of Education – a difficult task for a small college.

There has also been an increase in student diversity emphasized by a formal Inclusion and Diversity Council charged with evaluating the college’s inclusionary practices for students from all backgrounds. Physical changes to campus include the addition of one new building and a new campus entry, as well as renovations to four others to increase efficiency and better meet student needs.

It is evident that for Keim, the definition of president expanded to include encourager, supporter, fundraiser, brainstormer, listener, planner, teammate and friend.
“This has been the most intense work I’ve ever done, but it’s also been the most fulfilling,” said Keim. “Hesston College is a worthy place to invest oneself.”

Editor’s note: President Keim continues to finalize his future plans. He will serve as a part-time senior lecturer in business at Bluffton (Ohio) University for the 2016-17 year, teaching leadership-related courses in the MBA and Business Degree Completion programs. He also plans to continue working toward certification as a coach through the Kansas Leadership Center (Wichita).