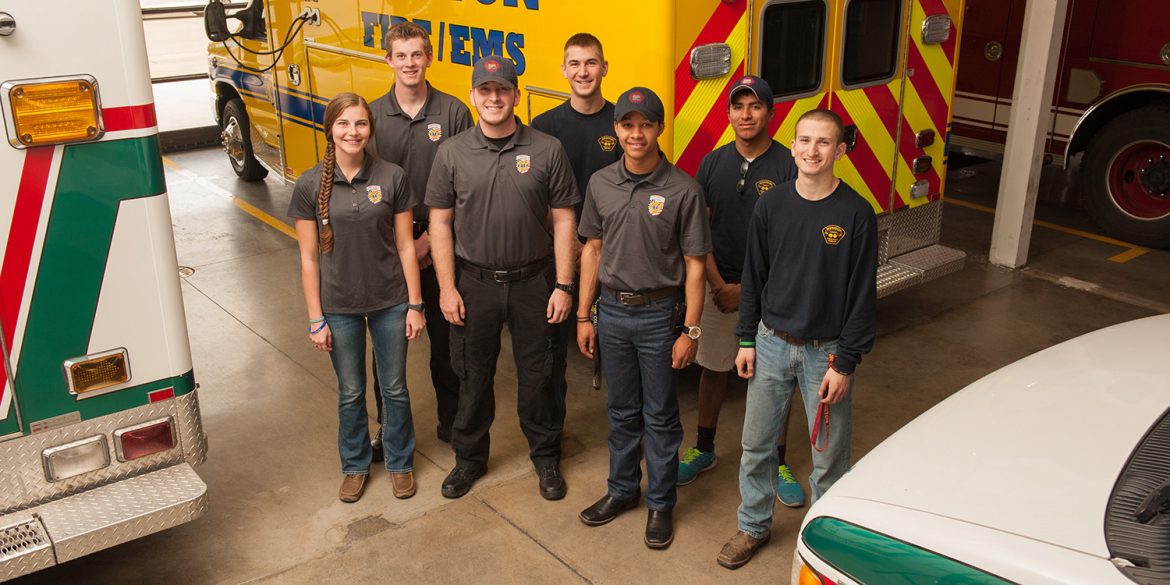 For many students, the Hesston College community is one that extends beyond campus borders. That is the case for seven students who work as volunteers with the City of Hesston Fire Department and Emergency Services. Despite unpredictable schedules, with calls coming in at all hours of the day and night, when each student made the decision to join they knew it would be valuable experience for their future careers. They had no idea their service would have such a profound effect on the community.

Then came the unthinkable events of February 25.

That afternoon, about 5 p.m., an employee at nearby Excel Industries, went on a shooting rampage. Suddenly, the quiet community of Hesston became another number in a list of tragic mass shootings with four dead and 14 wounded.

First responders from Hesston and surrounding communities, including several of the student volunteers, were quickly at the scene.

But why do students choose to volunteer with Fire and EMS Services when, with already busy academic and extracurricular schedules, there are less time-consuming options? The reasons are plentiful.

Some students volunteer because it corresponds with their major.

“I wanted to take the EMS class to get a head start for the nursing program,” said Beth Schurz ’17 (Phillipsburg, Kan.), a junior in the four-year BSN program. “But I also love to help people and the medical field.”

Zach Stauffer ’17 (Belleville, Pa.), on the other hand, likes the high-intensity situation.

“I wanted to become a firefighter because of the adrenaline rush it gives me and the feeling of satisfaction when a fire is out or a patient is being transported to a hospital quickly and efficiently,” Stauffer said.

The work of a first responder is not for the faint of heart, as the students are reminded with each call that comes in.

At the Excel scene, after law enforcement declared it safe, first responders quickly got to work tending to the victims.

“As soon as I got out of the ambulance bystanders were telling me of multiple people who were shot and needing assistance”, said Schurz. “There were people everywhere.”

News reports stated an estimated 200 to 300 people at Excel at the time of the shooting.

For Stauffer, the scene was outside the scope of his fire training, but it didn’t deter him from doing his part.

“I thought, ‘What do I do? I don’t have any training for this,’” said Stauffer. “I was instructed to follow someone around with the trauma kit. It was a lot of mass chaos with people running and helping wherever they could.”

The event left the community, county and even state understandably shaken. The student first responders didn’t anticipate the magnitude of that specific call in quiet Hesston. Yet their training and a commitment to serve helped each one do what was needed.

In the wake of the shooting, many in the community are reminded of the sacrifice and dedication of first responders.

“The most rewarding aspect of this service is the satisfaction of knowing someone’s life could be saved, even if it means going into a potentially dangerous situation,” said Stauffer. “It’s a risk and reward job.”