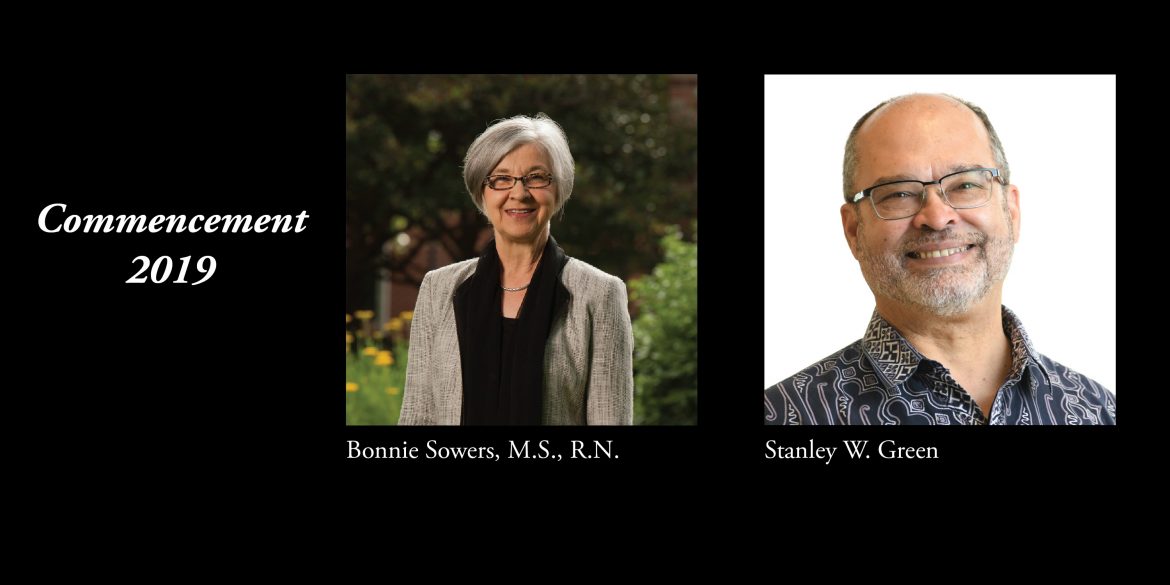 Hesston College announces Bonnie Sowers and Stanley W. Green, two long-standing professionals in their fields, as the commencement speakers at separate Bachelor of Science in Nursing and Associate Degree ceremonies on Saturday, May 18.

Due to construction in Hesston’s Yost Center gym, the typical site of Hesston College graduation ceremonies, the 2019 event will instead be held at the on-campus church, Hesston Mennonite Church. With a smaller maximum capacity than the gym, the venue will see two separate graduation events on the day.

The Bachelor of Science in Nursing Commencement and Pinning Ceremony will be at 10 a.m. on May 18, with emeritus faculty member Bonnie Sowers, M.S., R.N., delivering the commencement address.

Sowers led the Hesston College Nursing program from 1980 until stepping down from the role in 2017. Prior to leading what has become the college’s largest academic program, Sowers was a professor in the nursing department, and continued to teach for one year after stepping back from the director role, serving at Hesston College overall for about 47 years. Under her leadership, Hesston College Nursing established itself as a highly successful and respected program, became the largest program on campus, and transitioned from a two-year degree program to the college’s first four-year degree program in 2015.

The Associate Degree Commencement Ceremony will be at 7 p.m. on May 18. Stanley W. Green, executive director for Mennonite Mission Network (MMN) will present the commencement address.

Green has served at the helm of MMN since its founding in 2001 by the leaders of the emerging Mennonite Church USA. Prior to that appointment, Green served for seven years as president of Mennonite Board of Missions, the mission agency of the former Mennonite Church. Born and raised in the apartheid system of South Africa, Green has worked for human rights, social justice movements and in ministry around the world.

Both ceremonies will be streamed live online at hesston.edu.

Students completing the Disaster Management Program will be celebrated in a special recognition ceremony at 1 p.m., Saturday, May 18, in Keim Center’s Bontrager Worship Center.

In addition to recognizing student accomplishments and graduates, the weekend will also include several performances and exhibitions. See a full Commencement Weekend schedule at hesston.edu/commencement.

Other weekend events include:
• Art exhibts featuring student work in the Regier Friesen Gallery and throughout Friesen Center. The exhibit will be open from 9 a.m. to 4 p.m. throughout the weekend.
• Sophomore music student recitals throughout the weekend.
• Bel Canto Singers “Grant Us Peace” concert at 7 p.m., Friday, May 17, at Hesston Mennonite Church.
• Go Everywhere graduate reception at 8 p.m., Friday, May 17, in the Hesston Mennonite Church Community Center.
• Theatre Showcase featuring a themed collection of scenes and monologues at 4 p.m., Saturday, May 18. Doors open at 3:45 p.m.