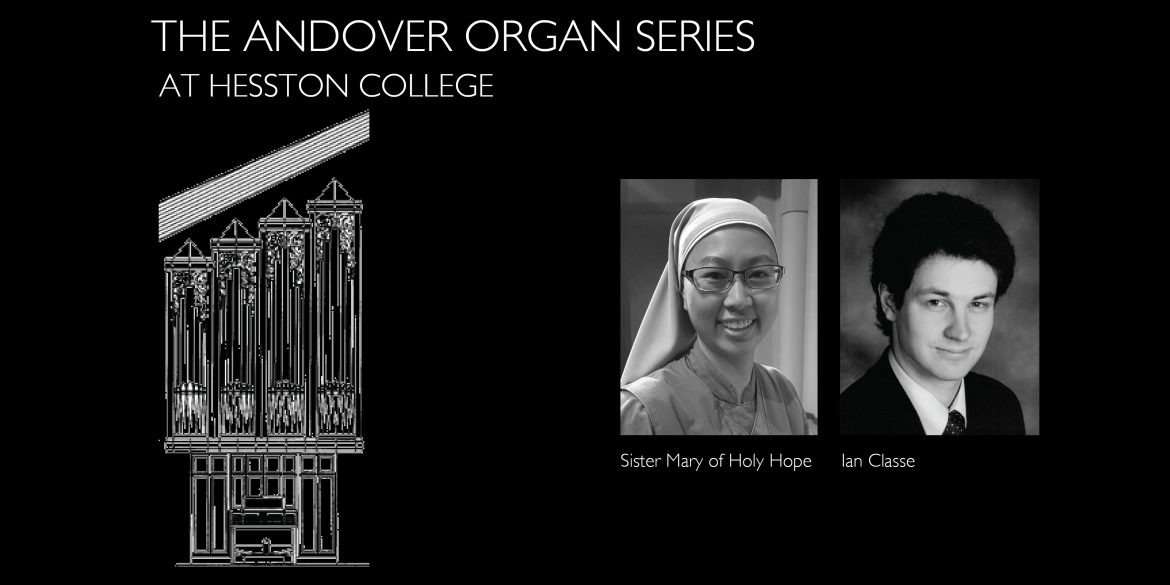 The final concert of the 2018-19 Andover Organ Series at Hesston College will feature two University of Kansas (Lawrence) (KU) graduate students, Sister Mary of Holy Hope and Ian Classe. The concert will be at 7 p.m., Friday, May 10 at Hesston Mennonite Church on the Hesston College campus. The concert is free and a reception will follow the performances.

Sister Mary of Holy Hope has the motto, “Praise Him with strings and pipes,” (Psalm 150). Sister has served at Our Lady’s Montessori School (OLMS) in Kansas City, Kan., as a preschool teaching assistant and music teacher since 2011. In 2017, she began pursuing a Master’s of Music in church music at KU, studying organ with Dr. Michael Bauer. She also serves at Our Lady of Good Counsel Church in Kansas City, Mo., as an organist and cantor, and continues to teach preschool music at OLMS.

A native of St. Louis, Mo., Ian Classe is a Doctor of Musical Arts candidate at KU. He received his undergraduate musical training at Truman State University (Kirksville, Mo.), then earned master’s in organ performance from Pittsburg (Kan.) State University where he studied organ, harpsichord and choral conducting with Dr. Susan Marchant. At KU, Classe has studied organ with Dr. James Higdon and choral conducting with Dr. Michael Bauer.

An active keyboard performer and church musician, Classe is in demand as a recitalist and is completing a doctoral project on American organ music of the late-19th century. He presently serves as principal organist at Corpus Christi Catholic Parish in Lawrence, where he recently participated in a recording project of music for the liturgical year.

The Andover Organ Series at Hesston College is funded by the John Ernest Foundation and features organists from around the world. Andover organs are built by the Andover Organ Company of Methuen, Mass. The company builds and restores mechanical action pipe organ, and since its founding in 1948, has restored more than 500 organs across the U.S., as well as building new instruments, including the Opus 116 pipe organ installed at Hesston Mennonite Church on the Hesston College campus in 2007.