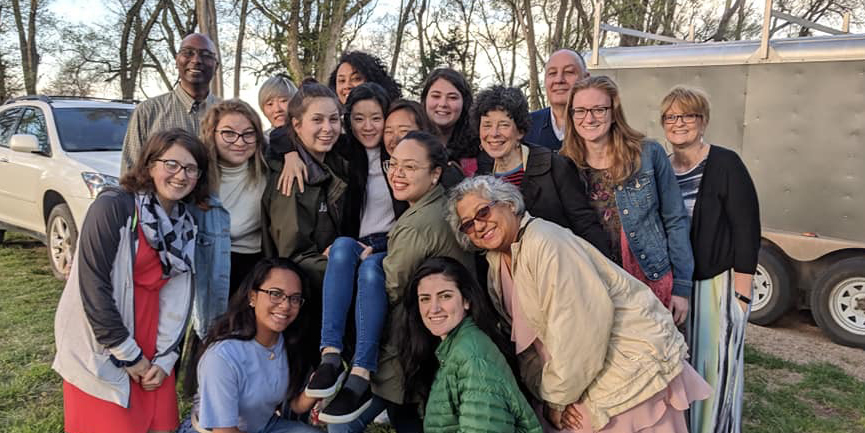 For Risa Fukaya, the Hesston Experience has been transformative and unexpected, to say the least.

As she approaches graduation and the end of her time at Hesston, the sophomore from Zushi, Japan, will leave with expanded language skills, increased cultural understanding, influential friendships, an unexpected plan for her journey to come, and a new-found faith.

To start with, Hesston College even started as an unexpected possibility. Fukaya was thinking about schools in New York and California, until the agent with whom she was working to navigate the process of applying to U.S. colleges, suggested Hesston.

“My agent said, ‘There’s this college in Kansas that has a lot of international students…’ They suggested Hesston because it was going to be my first time living in the states, and it would be a good experience to get used to the language and culture and everything,” said Fukaya. “I didn’t really have a specific idea of where to go, so I thought, ‘Why not?’”

Like many international students, Fukaya never visited campus before she arrived as a student in August 2017, yet she was optimistic about what was to come. With nine years of private voice lessons under her belt, she had auditioned for and earned a spot with Hesston’s premier choir, Bel Canto Singers, where she began to form friendships.

To top it off, she was paired with an American roommate, Madi Kauffman and the two bonded quickly. Fukaya began attending church at Kauffman’s home congregation at Journey Mennonite Church, Yoder (Kan.) campus, and would stay with Kauffman and her parents, Dale and Vicki, during breaks in the academic year, even living with them through the summer.

It was the relationships Fukaya formed with the Kauffmans and others that would prove to be life changing, and lead her to dedicate her life to Christ and be baptized on April 21, Easter Sunday 2019.

Fukaya didn’t grow up practicing a religion, but her arrival at Hesston and introduction to the Christ-centered faith community piqued her curiosity.

“I didn’t really know what Christianity meant, but when I would talk to my Christian friends about things going on in my life, their perspective and advice was so caring, and different than what I was used to; I was really interested in that spiritual perspective,” she said.

It was towards the end of her first year at Hesston, after having been exposed for about eight months to a new way of looking at life and situations, and having both classroom discussions and informal conversations that offered new ideas and concepts, that Fukaya recognized the existence of God and God’s care for her.

Fukaya had been going through a difficult situation with a friend, and during congregational sharing time at church, Kauffman encouraged her friend to share about her situation and ask for prayer for guidance. Following the service, another friend from church asked if she could pray with Fukaya.

“As she prayed, I turned my situation over to God for the first time,” Fukaya said. “I told God I just needed to know if I was doing the right thing. I can’t really explain how it felt, but I so clearly heard God tell me that I just needed to keep doing what I was doing. It was such a vivid moment of God speaking to me. I was shocked and speechless. That’s when I knew God was real and there for me.”

Since that moment about a year ago, Fukaya’s faith in God has grown as she has relied on God more as she navigates life and college in a new country and culture, dealing with friends, and serving as a leader among her peers as a Resident Assistant in the dorms.

Those closest to her also noticed the growth, and Dale Kauffman, her friend Madi’s father who is also on the pastoral team at Journey at Yoder and who has also become like a father to Fukaya as well, asked if she’d be interested in making a public statement of her faith through baptism.

So in a celebration of the new life found in Christ, the Easter morning sunrise service had an extra element added to it. The church family and many of Fukaya’s Hesston College friends and faculty and staff mentors were in attendance to celebrate with her.

“I had been thinking about my faith for a year and what it meant in my life,” said Fukaya. “When Dale asked if I wanted to be baptized, I knew it was something I wanted to do – to say this is how I want to live my life. I want to follow Jesus.”

Holding true to Hesston College’s tagline and commitment for students to “Start here, go everywhere,” Fukaya’s decision to attend Hesston has been the start for a new kind of journey.

Following her graduation from Hesston, Fukaya has decided to take a gap year before continuing her education, and has committed to spending a year in a service assignment through Mennonite Mission Network. She doesn’t know much yet about what her service role will entail, but hopes to be a blessing to the people she encounters in the same way the people in her life have been a blessing.

“These two years have been such a time of growth,” said Fukaya. “God used my friends to deliver a message into my life. I want to continue growing that same kind of love inside of me and being ready to give it to people at any time and in any place.”