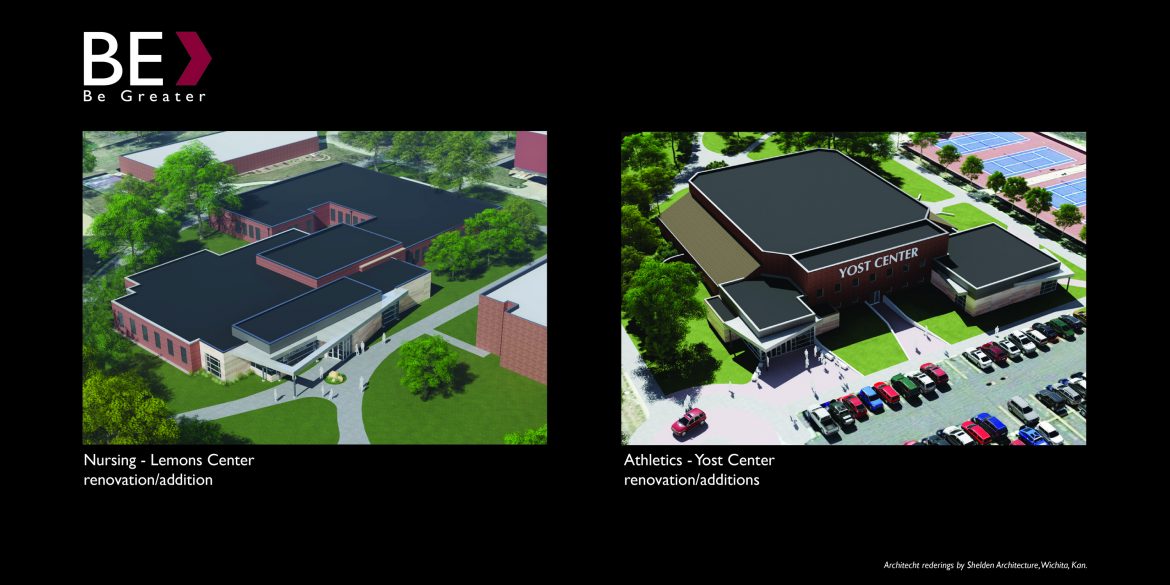 Hesston College has been awarded a $750,000 challenge grant from the J.E. and L.E. Mabee Foundation in Tulsa, Okla., for its Be Greater capital campaign that will address facility needs in the college’s nursing and athletic programs.

The terms of the challenge grant gives Hesston College one year to raise the remaining $1.5 million of the $6 million campaign. College administration hopes to complete fundraising by mid-December 2018 with construction to begin immediately following and completed in August 2019 in time for the start of the fall semester.

“The Development team is so thankful for all of the generous support received since our fundraising began in the summer of 2016,” said Mark Landes, interim vice president of Advancement. “We are optimistic the $6 million goal is reachable. The last 25 percent is typically the most difficult to secure, but we have a good plan to raise the additional $1.5 million during 2018, and we look forward to engaging with supporters to finish our fundraising plan and watch these critical projects come up out of the ground very soon.”

Nursing and athletics are Hesston College’s two largest program areas – each with about 41 percent of the student population. The facilities – Lemons Center for nursing and Yost Center for athletics – are not sufficient to accommodate current program needs.

Each portion of the total campaign carries a $3 million price tag and will focus on the renovation of the existing facilities as well as include building expansion with new spaces to better serve students, faculty, staff and guests to campus.

Lemons Center was constructed in 1996 as an addition to the J.D. Charles Hall of Science and Arts, and has not received updates in more than 20 years. Campaign improvements will include a 9,740 square foot addition to be named the Bonnie Sowers Nursing Center in honor of longtime nursing program director Bonnie Sowers who retired from the role in 2017 after more than 40 years. Within that space will be a simulation lab, student practice rooms, a fundamentals lab, storage space, faculty offices, an administrative suite, a student lounge and study spaces. Some select areas in Charles Hall will also receive renovations and upgrades to benefit the natural sciences.

When Yost Center was built in 1982, Hesston fielded six intercollegiate teams compared to 14 teams today, posing a space problem for the current athletic facility and personnel. Enhancements included in the campaign are a 3,000 square foot weight room on the southwest side of Yost Center, a new, on-campus softball diamond, the addition of a new lobby on the northwest side of Yost, a coaches’ office suite, main gym renovations, a remodel of the athletic training room and the addition of a multi-purpose team room.

Hesston College has received grants from the Mabee Foundation for capital projects in the past, the most recent being a $500,000 challenge grant in 2014 for a $3.8 million campus entrance and renovation of the performing arts building, now named Keim Center for Performing Arts Education. That challenge was completed in October 2014, ahead of the December 2014 deadline, and the project was completed for the fall 2015 semester.

“We’re grateful for the relationship we’ve built with the Mabee Foundation over the years,” said Landes. “They have been supporters of the Hesston Experience and the college’s mission several times and in many ways. It’s gratifying to again receive their support and know they, too, recognize the importance of these programs to Hesston College.”

In addition to the Mabee Foundation grant, two lead gifts for the nursing portion of the campaign have been graciously provided by Carroll and Roberta Miller of Greeley, Colo., and Doug and Connie Dorsing of Fruitland, Idaho.

Donors have contributed $500,000 since the Mabee Challenge was announced, bringing the Be Greater Campaign to the $5 million mark.